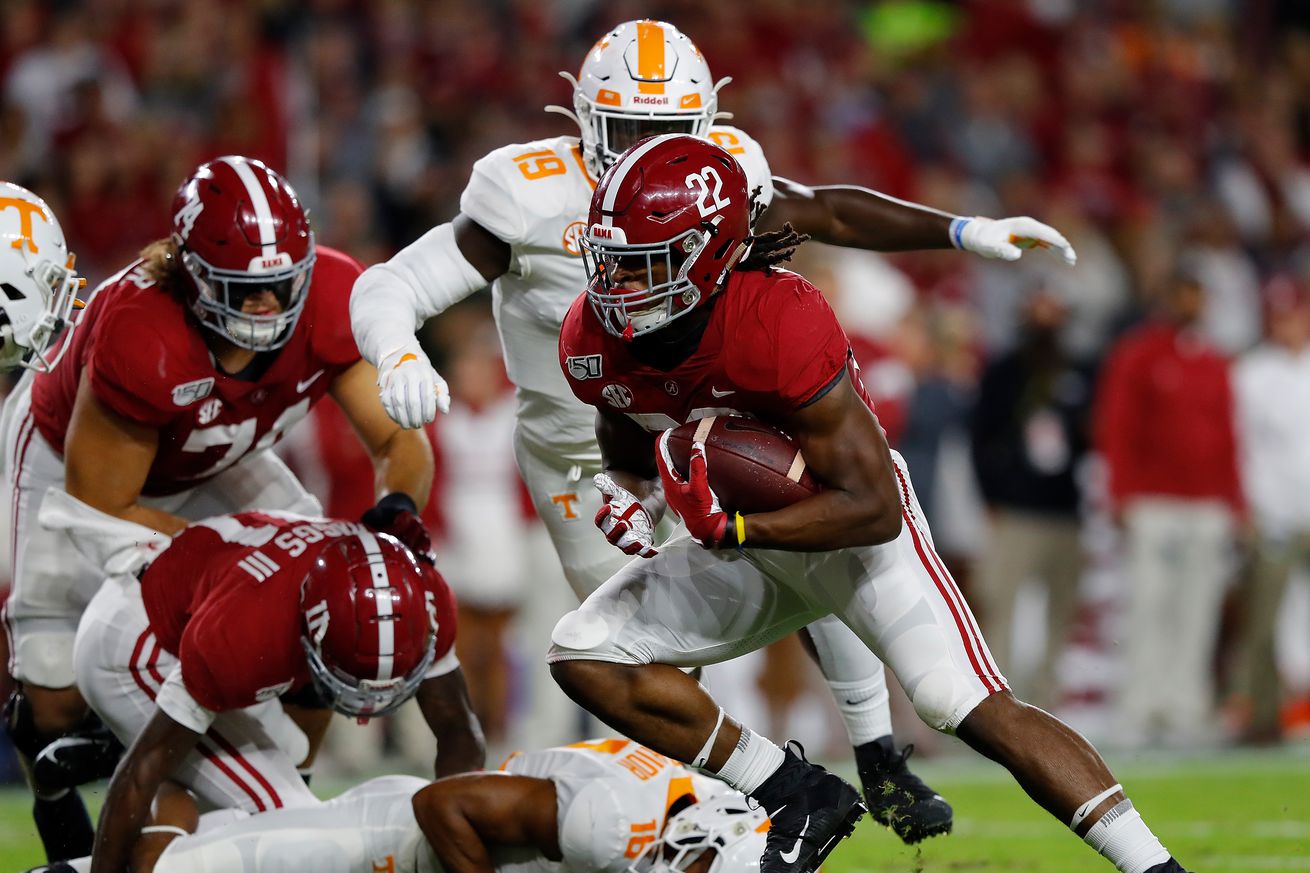 2020 may be the Vols’ best chance to beat Alabama. | Photo by Kevin C. Cox/Getty Images

The post-Tua era is now.

The Third Saturday in October may not actually be played on the third Saturday this year, but you better believe the intensity will be as heightened as ever, regardless of the date.

Tua may be gone, but Nick Saban is still around. You know he’ll have his team ready and prepared for the 2020 season, even if the world around them is on fire.

This sounds crazy, but 2019 was considered a disappointment for Alabama. I know, I know, I know. An 11-2 record is a helluva year. But in BamaLand, it’s bush league.

Tua Tagovailoa was having an incredible year before he suffered a season-ending injury against the Mississippi State Bulldogs. Mac Jones played well in his absence, but the Tide were overshadowed by Joe Burrow and the LSU Tigers’ incredible season.

Alabama had one of the best offenses in the country in 2019. In fact, if LSU wasn’t as good as it was, Bama probably would have been on top. The Crimson Tide finished second in Football Outsider’s offensive FEI rating and was first in their touchdown rate metric.

That elite offense wasn’t so elite inside the red zone, though. Alabama was a mere 64th in scoring percentage (.839), which was also good for eighth in the SEC. For context’s sake, Mississippi State had a higher scoring percentage inside an opponent’s 20-yard line.

The offense actually carried the team for the first time probably ever under Saban. The defense was decent, but again, according to BamaLand standards, it was not very good. Regardless, it was still a top-10 unit (10th) according to FO’s FEI rating.

Aside from youth and injuries, the defense’s main issue was that it gave up a bunch of yards, but it had high marks in the two areas that matter the most – points allowed and turnovers. Bama allowed 324.4 yards per game, which was its highest mark since 2014, but it gave up the 13th-fewest amount of points in the country (18.6) and the defense fielded the ninth-highest turnover rate per drive.

As good as Alabama is on a yearly basis, the kicking game is consistently inept. It’s one of the more interesting phenomenons in football. Joseph Bulovas and Will Reichard combined for a 12-of-18 mark (they both missed three kicks apiece), which was one of the SEC’s worst percentages. Reichard was the starter, but got injured.

Who left and who’s new?

The Tide lost quite a bit on offense. Tagovailoa, Jedrick Wills Jr., Henry Ruggs III, and Jerry Jeudy —all starters— are all gone. All four of those guys were also first round picks, so it’s clear how much they meant to the team.

Alabama’s offenses threw the ball a lot with Tagovailoa at quarterback, but don’t be surprised if Saban runs the ball more with Jones. In Jones’ three starts against P5 teams, Alabama ran the ball an average of 35 times compared to attempting an average of 29 passes per game. In contrast, the Tide had four more total pass attempts than rush attempts through the first nine games of the year when Tagovailoa was the starter.

If Jones struggles at all, then Saban can turn to five-star freshman Bryce Young to lead the offense.

That running game will undoubtedly be anchored by Najee Harris, who is one of the best running backs in the country. It’s business as usual behind Harris. Bama is loaded at the position after him and it starts with Brian Robinson Jr., who finished with the second-most rushing yards on the team last year. Keilan Robinson is a home-run hitter and former five-star recruit Trey Sanders has recovered from a broken foot. Four-star freshmen Jase McClellan and Roydell Williams are the future, but may be hard pressed to crack the rotation in 2020.

The Tide should be fine at receiver even though Ruggs III and Jeudy are gone. DeVonta Smith and Jaylen Waddle are two of the most electric receivers in the country. If John Metchie III can develop into who the staff thinks he is, then this group may not even take a half a step back. Slade Johnson provides decent depth. There is room for a freshman to make some noise. Javon Baker, Thaiu Jones-Bell, and Treshon Holden are three four-star guys who could definitely log some significant snaps if they have a strong camp.

Tight end seems like a solid group of players, but who ends up as the main guy is a toss-up. The most proven guy is grad transfer Carl Tucker, but the most talented guy is Jahleel Billingsley. Miller Forristall had the most productive 2019 season of everyone, recording 15 catches for 167 yards and four touchdowns.

The offensive line returns four of five starters. Alex Leatherwood is back at left tackle. Don’t be surprised if Evan Neal moves to right tackle to replace Wills. Deonte Brown and Landon Dickerson will likely make up two-thirds of the interior offensive line, but there is a guard spot that’s open. There are many different options for the Tide, here. Emil Ekyor Jr., Darrian Dalcourt, and Tommy Brown could certainly nab the starting role.

If you’ve noticed a theme with these previews so far, then I’m with you. Every team has lost quite a bit of production/talent on either side of the ball and it extends to Alabama’s defense. Five guys from the 2019 squad have moved on to the NFL.

Raekwon Davis is one of them, but the defensive line returns a good amount of experience. LaBryan Ray and D.J. Dale should give the group a boost after missing a lot of time in 2019. The good news is that those two injuries opened up playing time for Christian Barmore and others. The defensive line still has a lot to prove —especially when it comes to staying healthy— but there is a good amount of experience among the group. Timothy Smith and Jah-Marien Latham are two monster-sized freshman who could contribute in 2020.

Dylan Moses and Christian Harris form arguably the nation’s best inside linebacker tandem. Five-star recruits Will Anderson and Chris Braswell have a great shot to get on the field just based off the fact that the cupboard is relatively bare when it comes to production. Anfernee Jennings, Terrell Lewis, and Xavier McKinney were responsible for 17 of the team’s 32 sacks. Saban and defensive coordinator Pete Golding will certainly earn their paychecks this year.

Patrick Surtain Jr. anchors the secondary, but the starting spot next to him is wide open. Josh Jobe figures to be the guy who lands the job and Ronald Williams Jr. will likely play the STAR position. Can four-star corner Jahquez Robinson land some playing time?

Safety is wide open, too. Both starters from 2019 are now in the NFL. Jordan Battle returns the most experience and played pretty well last year, but a starting job is far from guaranteed for him. Roll Tide Wire currently projects junior Daniel Wright as the other starter, but don’t count out four-star recruit Malachi Moore.

RB Trey Sanders – It really feels like Saban will utilize the ground game as he figures his offense out. Sanders is one of the most talented backs in the country and would’ve been a big part of last year’s offense if he didn’t break his foot. Look for him to get a lot of touches this year.

DL Christian Barmore – This is a big dude. At 6-foot-5, 310 pounds, Barmore has the size to be an effective defensive end in Saban’s defense. He’s not just about run defense, either and his two sacks in 2019 show that. Fans should be excited to see what he can do with almost a full year of experience under his belt.

QB Mac Jones – OK, sure. I’ll take the low-hanging fruit, here. Jones has a good offensive line, a stable of running backs, and two very good receivers to throw to. He’s in a good spot. If he can avoid a slow start, then he should have a good year in 2020.

There’s a lot of promise with this 2020 team and by promise I mean your typical, run-of-the-mill championship aspirations.

Saban has turned this program into a machine and it reflects year in and year out. It doesn’t matter who he loses (as long as it isn’t an injury), he continues to recruit the best players and is one of the best when it comes to developing them.

The scary thing with this team is depth. What happens if there is another slew of injuries? The Tide had the guys to make up for the losses last year, but I’m not so sure they do this year. The talent is there, sure, but that doesn’t mean these kids are ready to step on the field in the SEC after a shortened offseason.

But at the end of the day, expect Bama to be on top, as usual. The only thing that is uncertain is just how high they can actually get.