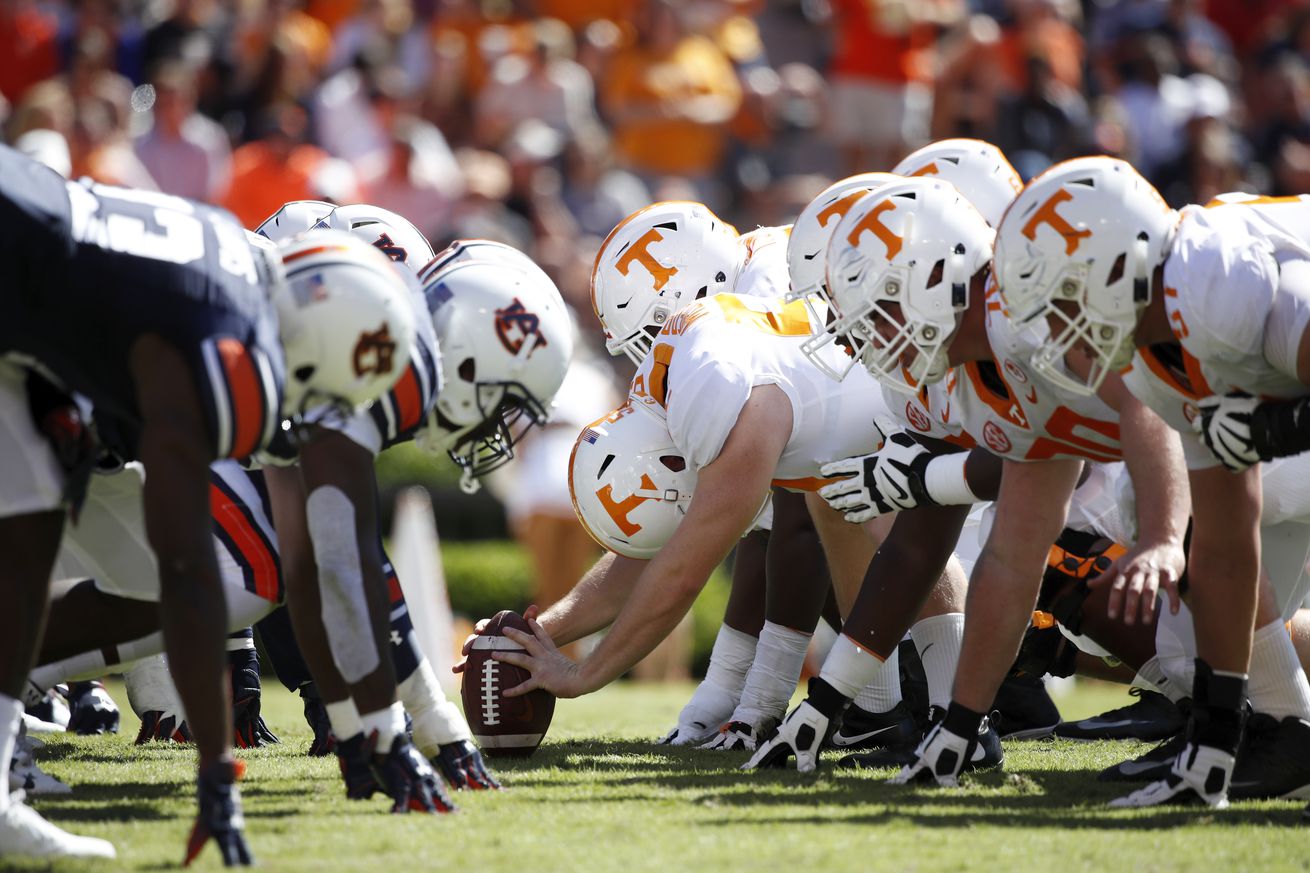 Jeremy Pruitt gets a chance to shine against the Tigers for the second time. | Photo by Joe Robbins/Getty Images

Are the Tigers set for a big year?

We’re down to the final two opponents in our football preview series with just a couple of weeks left until kickoff.

Jeremy Pruitt will face off against Gus Malzahn and the Auburn Tigers for the second time in three years when they come to Neyland Stadium in November. Tennessee’s third-year head coach won the first matchup and ended the Vols’ 11-game conference losing streak back in 2018.

Will the Tigers be in better shape to take on the Vols this time around?

Auburn finished the regular season with a 9-3 record that featured a win over hated rival Alabama and a narrow, three-point loss to the eventual national champion LSU Tigers. The season ended with a tough loss in the Outback Bowl, but it didn’t stop the Tigers from coming into 2020 with the nation’s seventh-best recruiting class.

True freshman Bo Nix led the way at quarterback and had some pretty good moments, the best being the late-game comeback he led against Oregon in the season opener. Nix threw for the sixth-most passing yards (2,542) and touchdowns (16) in the SEC, but showed off his mobility with 313 rushing yards and a team-leading seven rushing touchdowns, as well.

Per Football Outsiders, Auburn’s offense was rated as the 46th-most efficient offense, but it faced the eighth-hardest schedule after adjusting for the quality of opposing defenses that the Tigers had to play. Seth Williams improved on an impressive freshman year and was one of the conference’s top-10 receiving options.

Auburn seems to have an excellent defense every year and 2019 was no different. The Tigers’ defense finished fourth in terms of FOs’ defensive FEI rating. The run defense was outstanding as it allowed the ninth-fewest rushing touchdowns in the country. Auburn was also eighth in the country in both 3rd down conversion percentage and red zone defense.

Kicker Anders Carlson made the fifth-most field goals in the SEC, but had the conference’s ninth-best hit rate (72.0%), while punter Arryn Siposs had the 13th-best net average.

Nix is certainly the unquestioned starter at quarterback heading into 2020. He showed enough last year to where fans and the coaching staff should expect a step forward in his second year. Not only does he have the tools to be a very good quarterback, but he also has the players around him —and the right staff— to get to the next level.

Everyone knows how much Malzahn’s offense relies on running the ball, so it was no surprise to see 2019 feature five players with over 250 rushing yards, including Nix. Two of the team’s top three rushers —including leading rusher JaTarvious Whitlow— won’t return, but Auburn was able to bring four-star running back Tank Bigsby into the fold. D.J. Williams should take over as the starter, but don’t be surprised if Malzahn uses a committee that also involves junior Shaun Shivers and possibly even Bigsby.

The Tigers are set at receiver with Williams and Anthony Schwartz. Williams is Nix’s favorite target —with good reason— and Schwartz is possibly the fastest receiver in the SEC. Both players will represent a major challenge for opposing defenses. Malzahn also brought in Malcolm Johnson, Kobe Hudson, J.J. Evans, and Ze’Vian Capers, four four-star receivers who could certainly see some playing time. Fifth-year senior Eli Stove will provide good depth.

Tight end is a bit of a toss-up, but expect four-star recruit Brandon Frazier to have a big role if everything goes to plan. He was one of new offensive coordinator Chad Morris’ top targets when Morris first came on board, so you know the coaching staff will try and find ways to get Frazier on the field.

The offensive line is where things get dicey. The Tigers lost all five starters from last year. Center Nick Brahms is the only leftover who has any starting experience, so new offensive line coach Jack Bicknell Jr. is going to have to figure something out quick. Brandon Council offers experience as a grad transfer from Akron, so one would think he is in line for a crack at a starting spot. Brodarius Hamm has been through it all and should also get a crack at the starting lineup. The good news is that the Tigers have plenty of bodies, the bad news is they don’t know which ones they can rely on just yet.

Replacing the combination of Derrick Brown and Marlon Davidson is basically impossible, but the Tigers do have some guys who can make life hell for opposing offensive lines in 2020. Tyrone Truesdell, the starter opposite Brown, is back and there are some good options in JUCO transfers Deandre Butler and Marquis Burks. Zykevious Walker is a four-star recruit that is in line to get some playing time, himself.

Chandler Wooten’s decision to opt-out of the 2020 season removes a some playmaking ability from the linebacker corps, but the unit is in good shape overall. K.J. Britt returns after an All-SEC year and ZaKoby McClain looks ready to take off. Owen Pappoe is next in line when it comes to the Tigers’ prolific linebacker room. Four-star recruits Cam Riley and Wesley Steiner are battling for the Tigers’ fourth linebacker spot, so they’re coming along just fine and will provide excellent depth.

At first glance, it may look like Auburn’s secondary is in trouble. Like the offensive line, it lost almost all of its starters from a season ago. But when you dig a bit deeper, you’ll see that the Tigers are in better shape than what appears on the surface.

Nickelback Christian Tutt is the only returner, but he mans a very important position on the defense. Smoke Monday, Jamien Sherwood, and Roger McCreary should make up three of the other four positions. They don’t have much starting experience, but they have plenty of playing experience. JUCO transfer Marco Domio is likely to win the fourth spot, but don’t count out Nehemiah Pritchett or Jalyin Simpson.

The good news is that Kevin Steele offers continuity within the scheme and system, so whomever ends up starting in the defensive backfield will be familiar with what to do.

QB Bo Nix – Yea, I know. He’s on people’s radar, but if all goes to plan, he will certainly have what is considered a breakout season.

TE Brandon Frazier – I’m going out on a limb here because Malzahn doesn’t use tight ends in his offense, at all. However, Morris has been on record saying that he will incorporate the position while he’s designing the offense. It’s no secret he loves Frazier, so expect the kid to make some big plays this year.

CB Roger McCreary – Reports are that he’s ready to take over as the No. 1 cornerback for the Tigers. McCreary has all the tools to get it done and it looks like that is going to happen this year.

You have to like your chances as a Tigers fan. This team is in really good shape as long as Nix takes the next step and the offensive line gets everything figured out.

While the defense is missing star power, there is enough to be an effective unit. Most prognostications have the Tigers’ defense right around the same in 2020 as it was in 2019. If the unit can find a more consistent pass rush and if the secondary can stay on track, then the sky is the limit.

The Tigers are No. 13 for a reason. If they take the proper steps, then there’s little doubt that they won’t be a playoff team.