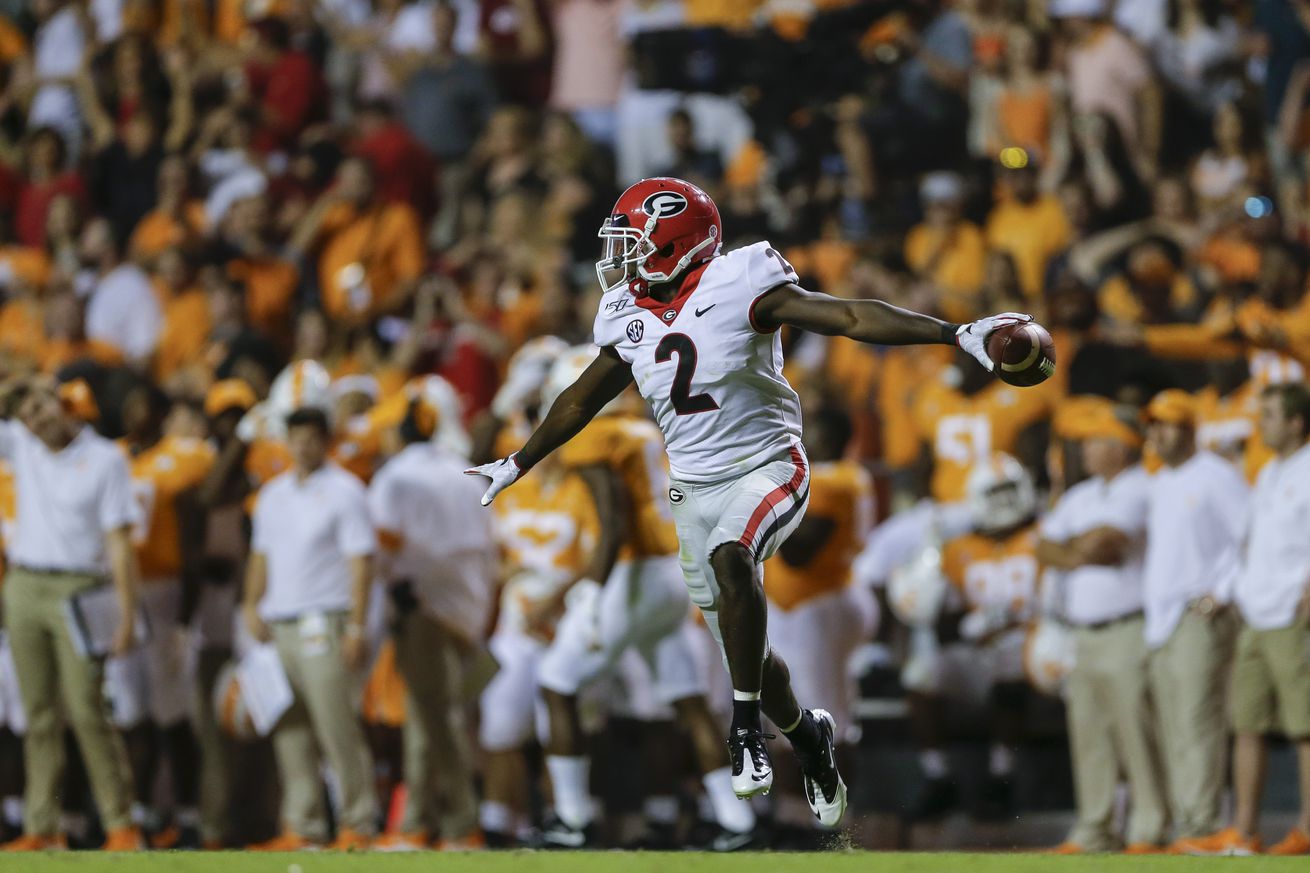 How will the Bulldogs look post-Fromm in 2020? | Photo by Silas Walker/Getty Images

Will the Bulldogs be ready for another run in 2020?

Tennessee’s 2020 schedule is finally official. One of the changes is that the Vols will now take on the Georgia Bulldogs in Week 3 of the season as opposed to the November matchup that was originally scheduled.

If the Vols want to continue to make the progress we saw at the end of 2019, then they will need to get a big win in 2020. Who better to upset than the Bulldogs?

Even though Georgia finished 12-2, there was a bit of a sour taste left in the program’s and fans’ mouths. Must be nice, right?

The Bulldogs rode the third-ranked defense all the way to a second straight SEC title game, but the LSU Tigers were just too much —what else is new— for them to handle. Regardless, the defense was absolutely unreal. Georgia finished with the top-ranked run defense and the eighth-most efficient pass defense. According to Football Outsiders, the Bulldogs finished as the third-best defense in terms of efficiency.

Safety Richard LeCounte tied for the 17th-most interceptions in the country (4) while Trajan Stephens-McQueen was a top-30 player in terms of total tackles (110). The Bulldogs were also a top-50 team when it came to team sacks (31), displaying that the defense got it done on all three levels last year.

The offense is where things took “a step back”. There wasn’t much of downfield threat in the passing game in 2019, but the offense still managed to stay efficient, ranking 28th overall in FO’s defensive FEI rating.

But still, the offense lacked. Jarrett Guarantano actually finished the season with a higher efficiency rating that Jake Fromm, if that tells you anything. That’s why Kirby Smart brought in Todd Monken over the offseason. He’s known for creating dynamic offenses —especially in the passing game— which is what Georgia needs to complement its elite defense.

When it comes to field goal accuracy, Rodrigo Blakenship had his worst year since his redshirt freshman season. Punter Jake Camarda finished fourth in the SEC in both punt average and net punt average.

Georgia lost a few heavy contributors from 2019, but it shouldn’t hurt too much since the team finished with the No. 1 recruiting class in the country.

The Jake Fromm Show has officially departed Athens after three years of solid play, but now Georgia has to find someone to replace him.

Fortunately, they have a few options. Jamie Newman is a graduate transfer from Wake Forest and is considered the leading candidate for the starting job, but J.T. Daniels —a transfer from USC— could make some noise and steal the job before the season starts. Stetson Bennett and Carson Beck could be in the mix if Newman and/or Daniels can’t cut it or get hurt, but expect either Newman or Daniels under center in 2020.

As always, the running back position is one of the team’s strengths, if not the biggest strength of all. Zamir White is ready to take over for D’Andre Swift and Georgia also nabbed two four-star backs in Daijun Edwards and Kendall Milton. James Cook, the brother of Vikings running back Dalvin Cook, adds a serious speed element to the backfield.

George Pickens, 2019’s leading receiver, returns for his sophomore year after displaying major potential as a true freshman. Everything came to fruition for Pickens in the Sugar Bowl, where he finished with 12 receptions for 175 yards and a touchdown. It was the most receptions in a single game by a UGA receiver in 17 years and the performance helped him land on the preseason watch list for the Biletnikoff award.

Senior Demetris Robertson will probably start opposite Pickens, but the order behind them is a bit vague. There’s a ton of young potential, but not much outside of that. Georgia brought in a quartet of four-star wideouts, so don’t be surprised if they find their way on to the field early and often. It will be interesting to see who Georgia puts in the slot, as it’s a pretty important position in Monken’s offense.

Tight end is a pretty large question mark. Grad transfer Tre’ McKitty can play, but he has to learn Monken’s offense and quick. If he does end up the starter, then there’s not much depth behind him, so the Bulldogs better hope he stays healthy.

The offensive line is where things get tricky. Not only did Georgia lose Andrew Thomas and Isaiah Wilson —who were both first round picks— to the NFL Draft, but versatile guard Cade Mays decided to come back home to Knoxville. These moves leave the Bulldogs with just two of the original starting five offensive linemen from 2019.

Jamaree Salyer will likely take over for Thomas at left tackle and there are plenty of candidates for the right tackle position. Xavier Truss, Warren McClendon, and Owen Condon all have playing experience and the Bulldogs recruited five- and four-star tackles in Broderick Jones and Tate Ratledge. There’s a great chance that Jones wins the job.

Trey Hill and Ben Cleveland (center and guard) return to the interior line and it’ll most likely be senior Justin Shaffer at left guard. There’s a chance that Shaffer could run into some trouble with Warren Ericson and Clay Webb. Webb could also potentially compete with Hill for the starting center gig, as well.

It’s easy to see why this defense was so good last year, and it should be just as good this year.

Georgia’s defensive line is experienced and has a lot of potential. The line is anchored by defensive end Malik Herring and he’s backed up Travon Walker, a former five-star recruit who had a helluva freshman year. Jordan Davis will man the nose while Devonte Wyatt and Julian Rochester will start at defensive tackle. Keep an eye out for Jalen Carter, one of Georgia’s top recruits of the 2020 class. The talented freshman is bound to get on the field in 2020.

Azeez Ojulari is back to play the JACK position after leading the team in sacks, but he’s also an excellent run defender. Nolan Smith is pretty much Olujari’s doppleganger and both players can also play with their hands in the dirt. Jermaine Johnson, 2019’s leading tackler Monty Rice, Walter Grant, Adam Anderson, and Quay Walker all return and all of them have their own unique skill set that allows Georgia’s linebacker corps to be on the nation’s best.

Safety Richard LeCounte probably should’ve went to the NFL last year, but he instead chose to return for his senior season. His running mate, J.R. Reed, left for the NFL after starting 32 games, but the secondary is deep. Lewis Cine will likely take over for Reed after showing major flashes in 2019.

Tyrique Stevenson is set for a big year playing nickel and Eric Stokes is good to go at one of the outside positions, but the other outside corner spot is up for grabs. The good news is there are two very good options in Tyson Campbell and DJ Daniel.

DE Travon Walker – This kid is good. Like, really good. Herring is an excellent player, but it won’t surprise me if Walker ends up as one of the defense’s best players by the end of the year.

RB Zamir White – He is your prototypical Georgia back and is ready to take the reigns after Swift’s departure. White will have a big year as long as the line holds up.

CB Tyrique Stevenson – Georgia’s breakout players have been the easiest of all the previews so far. You can see the talent in Stevenson and how natural he was at nickel last year. Expect big things from him this year.

Georgia looks locked and loaded for another strong year, but the big question is how quickly will it take the quarterback position and offensive line to get things figured out?

Arkansas represents a great opportunity to do just so, but then Georgia plays Auburn, Tennessee, Alabama, and Kentucky. There’s definitely a chance for the Bulldogs to start 2-3 (maybe even 1-4) on the season if they aren’t careful.

After that the schedule lightens up. If the Bulldogs hit the ground running, then it’s another season with championship aspirations. But if things start off slow, it could become a mediocre season in a hurry.

Regardless, the Bulldogs look to be in good shape for 2020.