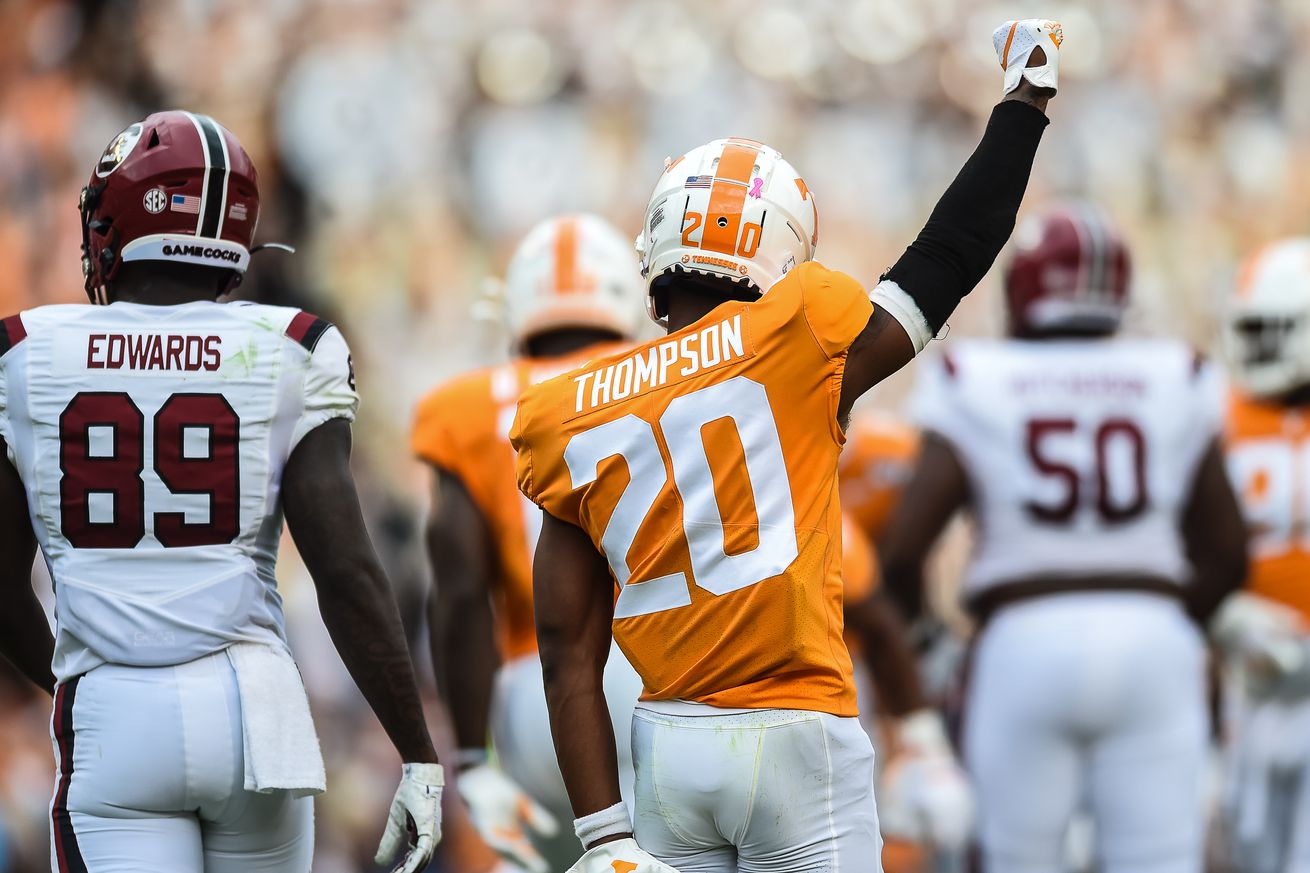 How will the Gamecocks fare in 2020? | Photo by Bryan Lynn/Icon Sportswire via Getty Images

Is this Will Muschamp’s last hurrah?

The Vols finally beat a Will Muschamp-led team last year when they beat the Gamecocks 24-20. Not only was there a feeling of relief among fans and the program, but it was the first win of the Vols’ six-game win streak to close out the 2019 season.

Let’s take a look and see what the Gamecocks look like heading into 2020.

The highlight of South Carolina’s season was the upset victory over the Georgia Bulldogs, who were undefeated and the No. 3 team in the country at the time. Outside of that, there wasn’t much to brag about.

A lot of that was due to injury at the quarterback position. Senior Jake Bentley threw a total of 30 passes before going down for the season with a Lisfranc injury, leaving the team with Ryan Hilinski as the starter. Hilinski would go 4-7 as the starter while throwing for 2,357 yards, 11 touchdowns, and five interceptions.

Hilinski showed flashes, but the offense just wasn’t the same. The Gamecocks finished 96th in total offense and 104th in Football Outsiders’ FEI rating. Things were particularly bad in the red zone, where the Gamecocks ranked 105th in scoring percentage and threw just four touchdown passes (which was the 18th-fewest passing touchdowns out of 130 eligible teams).

The defense was much better. It allowed the 66th-fewest yards and the 33rd-fewest touchdowns in 2019. According to Football Outsiders’ FEI rating South Carolina’s defense was a top-30 defense in 2019, with a specific ranking of 28th that placed it in the upper-half of the SEC.

Parker White’s 81.8% field goal percentage (18-of-22) was the fourth-best rate in the SEC and Joseph Charlton’s 43.0 net average was second-best among punters with 10 or more punts.

Who left and who’s new?

Even though you never want to see someone get hurt, Bentley’s injury may have been a blessing in disguise because it allowed Hilinski to learn on the fly. While that’s not a guarantee for growth or success, it’s significant because the coaching staff has 11 games worth of tape on Hilinski. They can now mold the offense around his strengths and help improve the deficiencies in his game.

The starting job is far from guaranteed. Collin Hill, the graduate transfer from Colorado State, is a major contender for the starting gig. He goes all the way back with the Gamecocks’ current offensive coordinator and quarterbacks coach, Mike Bobo, so he knows what Bobo wants out his guys. It will be interesting to see who wins the starting job, but at least the Gamecocks will have two guys with experience in case the starter goes down for a long period time again.

That hurts. The production will be hard to replace, but the Gamecocks do have five-star 2020 recruit MarShawn Lloyd coming in. He is an extremely talented back and should end up as the lead guy. Sophomore Kevin Harris showed a lot of promise as a freshman. He averaged 8.5 yards per carry and was second on the team with four touchdowns. Don’t be surprised if it’s a smooth transition at running back.

Losing receiver Bryan Edwards is a big deal. He was one of the most underrated receivers in 2019 and was the big-play guy for the Gamecocks. Shi Smith returns for his senior season, but everything behind is pretty much unknown. Xavier Leggette is a converted quarterback who came on strong toward the end of last year, so there’s a lot of promise there. The rest of the group is a mixture of guys who have had bad luck with injuries or talented players who haven’t found their groove yet. That leaves room for four-star 2020 recruit Rico Powers to potentially find the field in 2020.

Kyle Markway — the team’s third-leading receiver — is gone, leaving the tight end position up for grabs. Nick Muse will probably take over after catching 17 balls for 185 yards as the backup before tearing his ACL. Watch out for Jaheim Bell, though. Dude has some insane athleticism and will be a matchup nightmare when used properly.

Junior Dylan Wonnum has shown all kinds of promise, but has yet to play a full season on the offensive line due to injury. He will man the right tackle spot while JUCO transfer Jazston Turnetine will likely man the left tackle position. JUCO transfers are never a guaranteed thing, but it does help that Turnetine turned in an All-American season in 2019. It will be interesting to see what happens at left tackle since Sadarius Hutcherson started 11 games there in 2019, but he started every game guard in 2018, so he’ll likely slide back to guard. Jovaughn Gwynn played well as a true freshman and is back at left guard.

The defense lost a ton of talent, just like the offense, but its in better shape than the offense heading into 2020.

The most notable names are Javon Kinlaw and D.J. Wonnum, who were both draft picks after the 2019 season. Kinlaw and Wonnum were Nos. 1 and 2 when it came to individual sacks, but they were consistently disrupting opposing offenses and that consistency will be missed. Zacch Pickens is a five-star guy who had a good freshman year in 2019 and should take over Kinlaw’s —or senior Kobe Smith’s— spot. Rick Sandidge was a major get in 2018 and has played well while waiting his turn to crack the starting rotation. Brad Johnson should take over Wonnum, but don’t count out Jordan Burch. He chose the Gamecocks over LSU, Alabama, Georgia, and Clemson, so there’s obviously something to like there.

There are a bunch of other players who could compete and/or take over on the defensive line. South Carolina’s front four is loaded with talent. Depth will be no issue in 2020.

Ernest Jones, the leading tackler on defense, is back for his junior season. Jahmar Brown and Sherrod Greene look to be set at SAM and WILL. Damani Stanley could definitely challenge Brown, though, and Mohamed Kaba could be a factor if his knee has fully recovered from surgery.

The secondary returns a good amount of experience, including Israel Mukuamu, who led the team with four interceptions. There are depth issues, which caused the Gamecocks to recruit two corners and a safety for that purpose, but are otherwise set starting-wise in the NCAA’s 59th-ranked defensive backfield.

QB Collin Hill – Knee injuries have severely limited Hill’s career, but he’s shown that he’s capable of playing in Bobo’s offense. Hill completed 67% of his passes for over 800 yards with eight touchdowns and two interceptions in three games before suffering a season-ending knee injury in 2019. There’s a great chance Hill wins the starting job and has a good season if he stays healthy.

CB Jaycee Horn – He didn’t record an interception in 2019, but Horn has a lot of talent. He was well on his way to becoming a Vol until the debacle that was 2017 occurred. Phil Steele gave Horn a second-team Preseason All-SEC nod, but if Horn plays to his potential, then he can easily be a first-teamer.

WR Xavier Leggette – I’ve bought into Leggette. While he probably won’t have a crazy year, I think he’ll make enough progress to warrant some serious consideration going into 2021.

The over/under for South Carolina’s win total is currently set at 5.5, which feels about right.

There are questions all over the offensive side of the ball. The one good thing is that if Hill wins the starting quarterback job, then odds are there will be less growing pains on offense. The Gamecocks still have to see if their plans work out at running back and receiver, though.

The defense should be in good shape, but it will likely anchor the team. Is it ready to do that?

South Carolina’s current situation sounds like the season where it gets off to a slow start, but everything begins to click as the year unfolds. If that happens, the biggest question heading into 2021 will be whether or not Muschamp keeps his job.