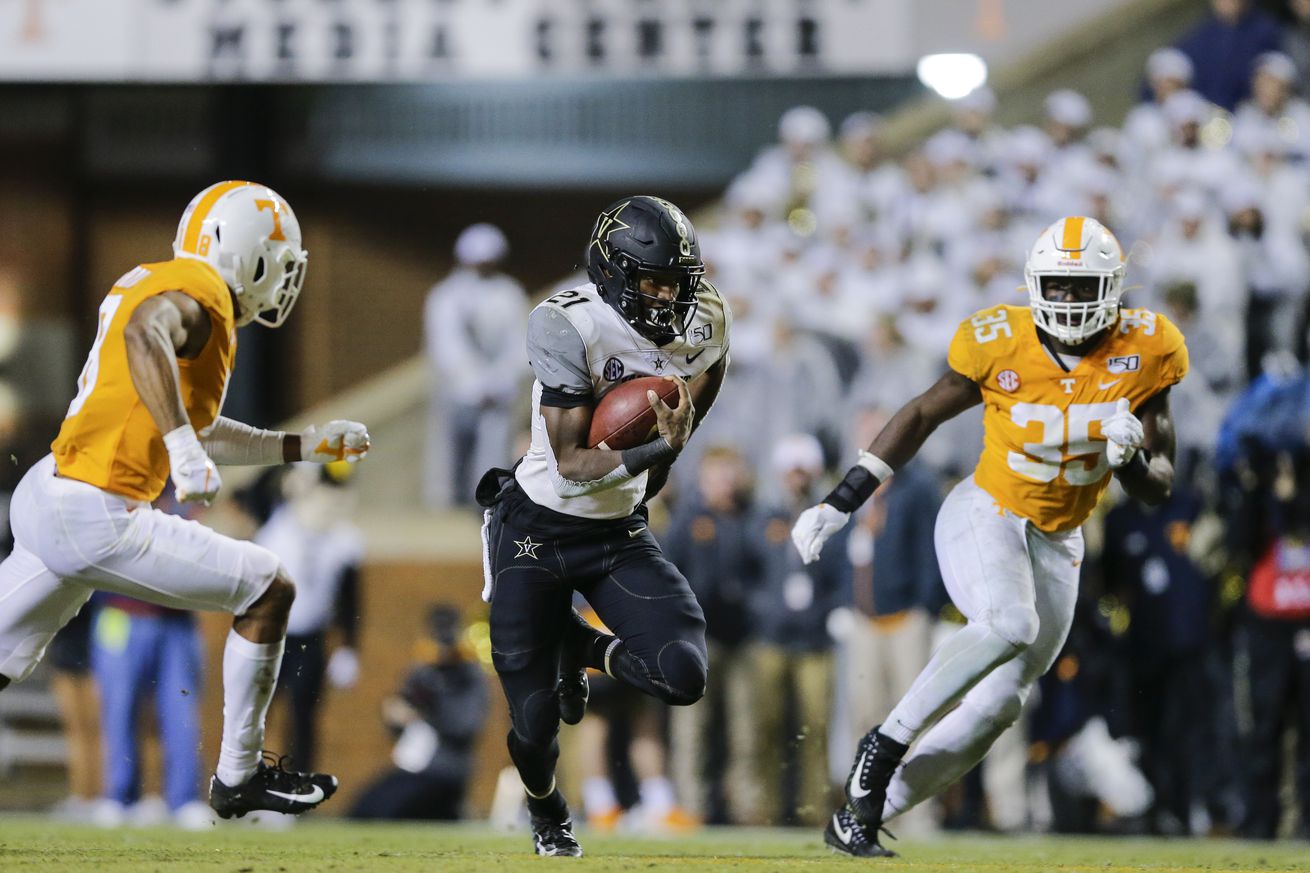 The Vols got their groove back against Vanderbilt in 2019. | Photo by Silas Walker/Getty Images

Will the Dores rebound from a tough year?

We stop in Nashville, Tennessee for our last installment of the opponent preview series. That’s right, it’s time to take a look at the Vanderbilt Commodores.

Have they done enough to get out of the SEC’s basement and back into bowl contention? Derek Mason has a lot to figure out this year.

Let’s take a look and see what needs to happen in order for the Dores to get back on track.

Last year was rough for Vanderbilt. Like, really rough.

The Commodores were outscored 294-95 (37-12) in conference play last year. A lot of that had to do with an offense that was one of the least-efficient offenses in the country. Per Football Outsiders, Vanderbilt was 110th out of 130 teams in offensive efficiency in 2019. The Dores also averaged just 16.9 points per game, which was dead last in the SEC and 125th in the country.

Ke’Shawn Vaughn drove what little offense Vanderbilt had. He finished with his second straight 1,000 yard season despite the team’s offensive struggles. Vaughn’s 1,028 yards were the eighth-most rushing yards in SEC.

The defense was just as bad as the offense. Mason’s unit ranked 108th in FOs’ defensive FEI rating. It was bad on all three levels as the Commodores’ 20 sacks were the 31st fewest in the country, they allowed the 115th-most rushing yards in the country, and they were 118th in passing efficiency defense. On top of all that, they allowed 31.8 points per game. Of all the teams in the SEC, Arkansas was the only team that gave up more points per game.

Riley Guay had a good year kicking the ball. He hit nine out of 11 field goal attempts and made all 18 extra point attempts. Harrison was the SEC’s 10th-best punter, finishing with an average of 43 yards per punt.

Riley Neal graduated and Deuce Wallace transferred, so it looks like the battle for the starting quarterback job will be between two true freshmen and two JUCO transfers. True freshman Ken Seals carries the most clout coming in, but reports are that no one has really done enough to separate themselves. The other quarterbacks involved are true freshman Mike Wright and JUCO transfers Danny Clark and Jeremy Moussa.

Whomever is under center will likely be handing off to multiple guys in the backfield. Vaughn’s departure leaves a crater at the position —he was responsible for 67% of the Commodores’ total rushing yards— but there are players like Jamauri Wakefield and Keyon Brooks who have playing experience. He spent a lot of last year on the injury report, but he ran for 353 yard on 78 carries as a sophomore in 2018. Brooks showed promise last year and should figure into the equation. Three-star recruit Rocko Griffin will likely find himself on the field, as well.

Cam Johnson’s return from a broken foot suffered in 2018 went very well and there’s little doubt that he will take over as the No. 1 option in Vanderbilt’s passing attack. However, what happens behind him is anyone’s guess.

Amir Abdur-Rahman could be a better receiver than Johnson if he can stay healthy. The trio of Chris Pierce, James Bostic, and Jackson Winrow have experience, but not much production. Vanderbilt brought in recruits Will Sheppard and Logan Kyle, two three-star kids who should contribute this year.

Sophomore tight end Ben Bresnahan caught seven passes for 105 yards, which is the most production of all of Vandy’s tight ends.

The offensive line returns three of five starters, but they must simply play better in 2020. Tyler Steen, Grant Miller and Cole Clemons were part of an offensive line that gave up 28 sacks in 2019. Stephen Spanellis is a trasfer from Michigan and Vanderbilt recruited three three-star offensive linemen in Bradley Ashmore, Jason Brooks, and Ben Cox to duke it out for the other two starting positions.

Dayo Odeyingo is the unquestioned leader of the defensive line and can really disrupt things in the backfield. He’ll receive some major help from transfer Alex Williams, who comes in from Ohio State. Cameron Todd and Drew Birchmeier are two space eaters and will anchor the interior of the defensive line.

Dimitri Moore is Vanderbilt’s best player on defense. His 99 total tackles were third-most in the conference and he showed a small bit of an ability to drop in coverage with three pass deflections. Andre Mintze led the team with 4.5 sacks and is back for his senior season. Vanderbilt really needs its linebackers to be more productive in 2019. In terms of both sacks and overall tackles.

Safeties Dashaun Jerkins, Tae Daley, and Brendon Harris were the team’s second-, third-, and fourth-leading tacklers in 2019 and all three return. Daley led the team in picks, so there is playmaking ability among the group. True Freshman Donovan Kaufman will add athleticism, making the quartet one of the more effective ones in the conference.

Allen George, Jaylen Mahoney, and Randall Hainey were all responsible for the remainder of Vanderbilt’s interceptions and just like the safety trio, all three corners return. The secondary should be in pretty good shape as long as they continue to develop.

WR Cam Johnson – He’s a former four-star recruit, so the talent is there. It all depends on how the quarterback position is played, but Johnson should have a big year even if the offense stalls a la Vaughn last year.

LB Dimitri Moore – You know who this kid is if you’re a SEC die-hard, but chances are the general public doesn’t know about him. Mason is going to put him in the best spot to succeed and it wouldn’t be a surprise if he leads the SEC in tackles this year.

S Tae Daley – The talented safety will lead the team again in interceptions and will establish himself as one of the SEC’s top safeties before the year is over with.

2020 is going to be another tough year for the Commodores. Their defense will be good enough to at least stand up to its opponents, but it’s really hard to see the offense doing much of anything, at all.

Last year showed us what happens with this team doesn’t have an established guy behind center and that is the case again this year. Who knows, maybe the eventual starter goes on to have a great year, but I’d say the odds are against that happening.

And even if the defense is respectable, it’s nearly impossible for it to make up for a non-existent offense, especially one that made as many mistakes as Vanderbilt did last year.

Mason always seems to find a way to get through to his guys, so there’s always a chance for a bowl game in Nashville, but I don’t think Vanderbilt will get to six wins in 2020.