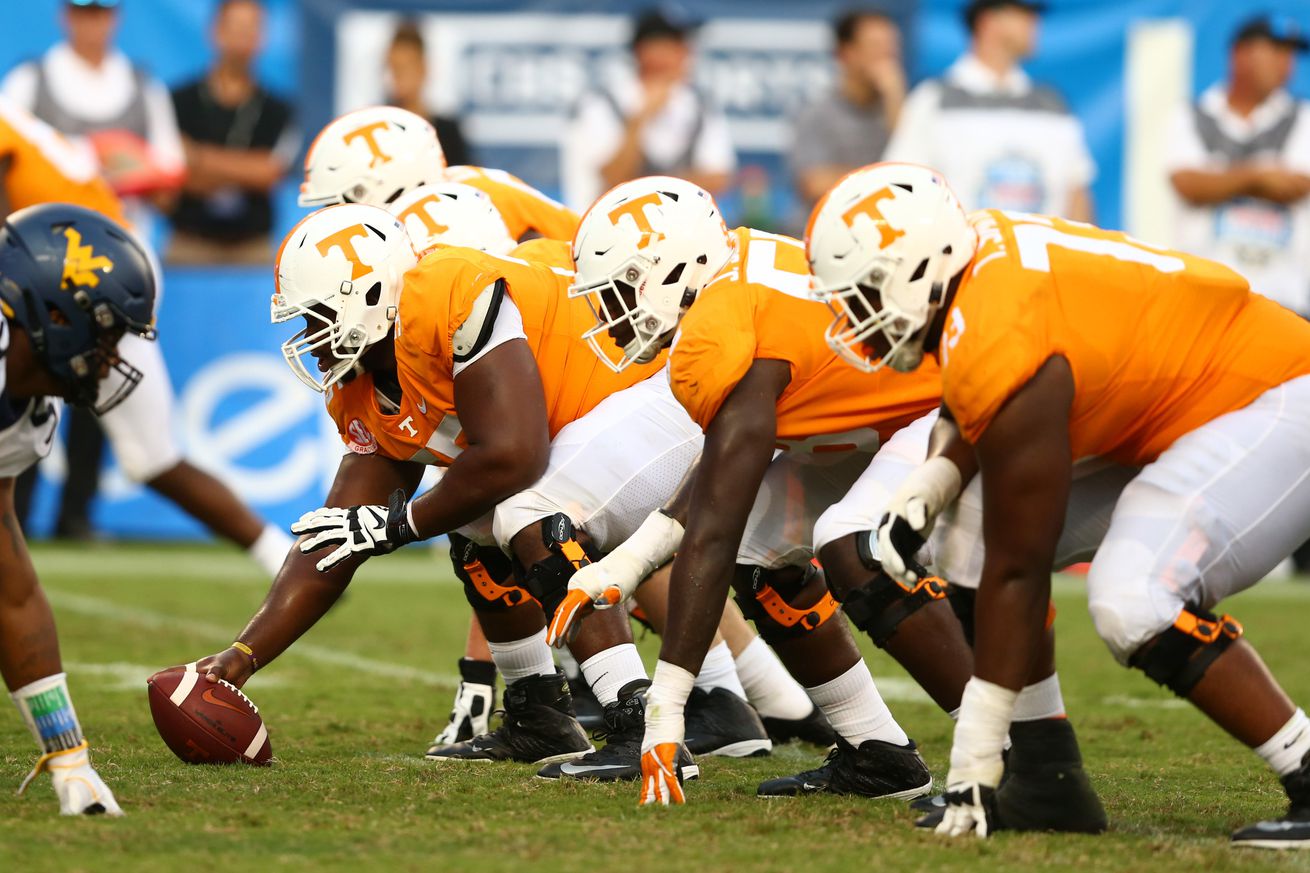 Tennessee opened spring practice on Tuesday afternoon in Knoxville, unofficially kicking off their 2020 campaign. Jeremy Pruitt returns for his third season, finally bringing some veterans back into the fold this time around. The Volunteers only lost five senior starters from last year’s team, creating an opportunity to take another step forward in 2020.

“We’ve got a lot of returning guys with lots of experience,” Pruitt said after the first practice session of the Spring. “Everybody seems to know where they’re supposed to be. You can tell that it’s the third year in the system. You can tell that we’ve got a lot of guys returning. There weren’t a whole lot of mistakes, so that’s good to see and we can really coach fundamentals.”

Tennessee brings back the entire starting offensive line from last year, while adding former five-star recruit Cade Mays into the picture. Senior quarterback Jarrett Guarantano returns, along with each of the main running backs from the 2019 season.

The main concern offensively is maximizing Guarantano, which could prove challenging without Jauan Jennings and Marquez Callaway in the picture. Tennessee will replace their top two receivers from a year ago with Josh Palmer, Brandon Johnson and Ramel Keyton.

The good news is that Tennessee — for once — isn’t installing a new offensive system. For the first time in a long time, the Volunteers are building off what they learned last year from Jim Chaney. Stability is a key to any successful program, and the Vols haven’t had any of that in quite some time.

This spring, that changes.

“The longer you do something, the better you should be at it,” Pruitt said of Chaney’s installation of his offense. “I felt like as the season went, we played a little cleaner. We didn’t turn the ball over as much and that is something that we need to build on this offseason. We have a lot of players coming back. We lost a lot of really good players also, so we have some holes to fill there. When it comes to terminology, understanding expectations, I feel like with Jim and this offensive staff being here this second time around, we are further ahead than we were this time last year.”

Pruitt has a similar situation developing on the defensive side of the ball, with Derrick Ansley returning for his second season. But it’s also Pruitt’s third year here, and he’s still a prominent voice on that side of the ball. That should help as three new coaches get started in 2020.

Jimmy Brumbaugh, Brian Niedermeyer and Shelton Felton make up Tennessee’s new look defensive staff, looking to help build on two consecutive positive seasons on that side of the ball. Those three coaches will help find replacements for Darrell Taylor, Daniel Bituli and Nigel Warrior — three key pieces on defense that are no longer in the picture.

“We have more numbers at every position,” Pruitt said. “This will be the first time in three seasons that we will be at 85 scholarships. Obviously, that helps. On both sides in the interior, we are obviously a lot bigger than we were the first year. These guys have to develop and learn to play together and create the right habits. We have competition here, so that should be good moving forward.”

One thing that we don’t see on a daily basis is the work in the weight room. Tennessee had a pretty clear issue in that department following the Butch Jones era, dealing with an alarming rate of injuries in his final two seasons. That was immediately helped by the arrival of strength coach Craig Fitzgerald, who is now going into year three in Knoxville.

As we know, keeping that particular department together is a big deal for any program.

“I can’t say enough about Craig and his guys and what they have done over the last three years,” Pruitt said of Fitzgerald. “Our guys continue to get bigger, stronger, develop discipline and a lot of mental toughness. In the offseason, Craig is a guy that is in high demand. That is no secret. There have been several jobs that have been open across our league and Craig was the first guy that they called. He decided to stay here. He is in demand because he is good at what he does.”

So while Tennessee has some obvious holes in the roster to patch this spring and fall, it’s fairly obvious that Pruitt is enjoying the fruits of his labor over the last two seasons. Finally, he’s not starting from ground zero. His team finally looks the part of a team ready to compete in the SEC. Experience is there — depth is there.