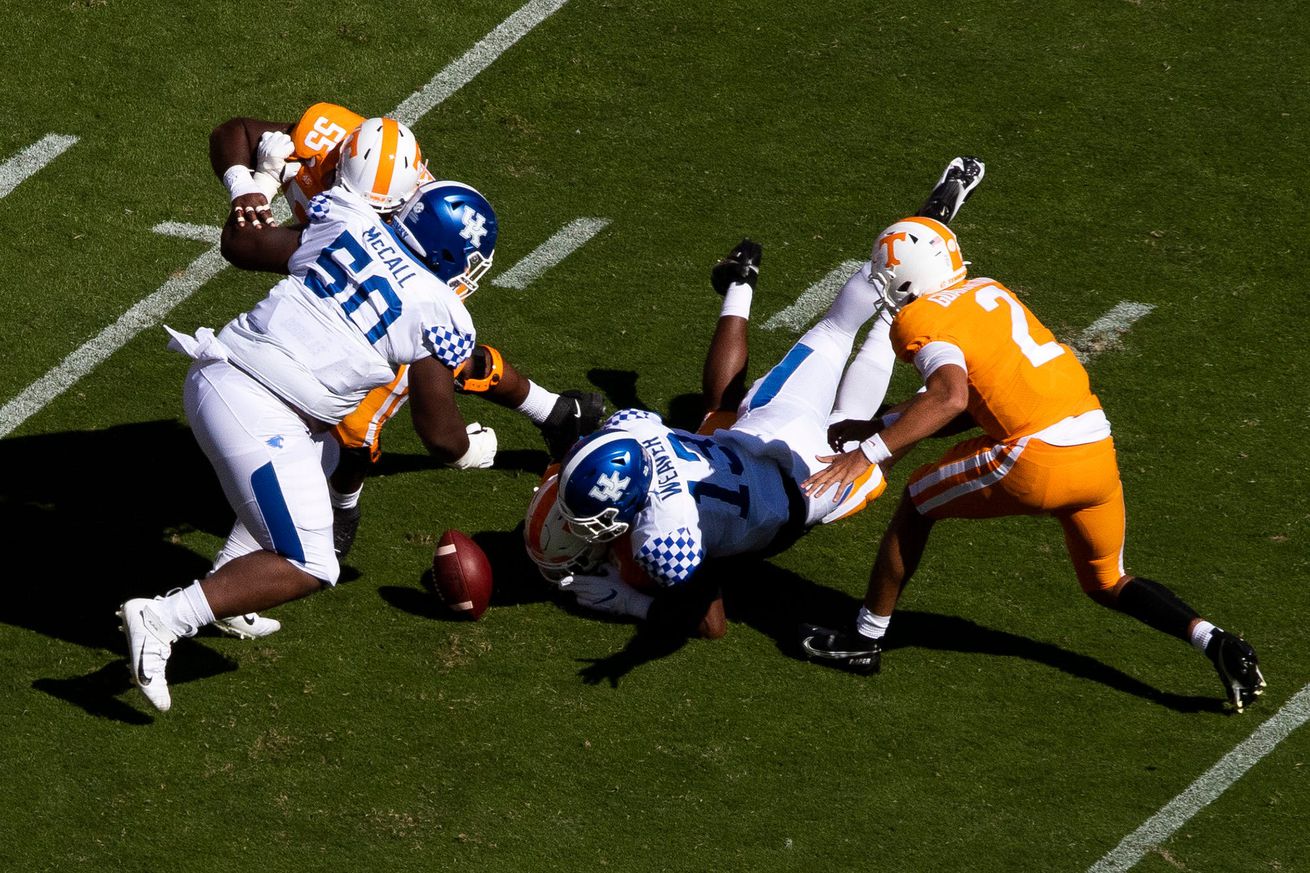 Some calm reflections after a stunning day in program history.

It’s hard to believe that we’re already 2.5 seasons into the Jeremy Pruitt era of Tennessee football. Between the roller coaster of a 2018 season, the massive comeback season in 2019, the bizarre once-in-a-lifetime circumstances of the 2020 preseason, and now the first four games of the actual 2020 season, it sure has felt like he just got started in Knoxville.

We shouldn’t take credit away from the Wildcats – they are a completely different program than they were five years ago. Mark Stoops has recruited well, broken streaks against Florida and Tennessee, led them to a 10-win season, beat multiple ranked opponents, and he’s gotten 11 players drafted (a third of their entire number of drafted players post 2000). Losing 34-7 is terrible for Tennessee, but it’s not a career ender like it may have been in the past.

So, not a catastrophe, but certainly not something you want to put on the resume.

And after Saturday, I think the good will with Pruitt has run out.

This isn’t FSU and Arkansas firing a coach after less than two seasons. This isn’t hitting the eject button on the coach who just got started. This is having concerns about a coach who might be stagnating, and who’s struggling to find balance for a team that he’s had almost three years to evaluate.

Going into the season, most of us here at Rocky Top Talk were skeptical of Tennessee‘s ability to break through the next level of conference opponents. In fact, we all hovered around the same record of 5-5 or 6-4. Wins against the lower and middle tier of SEC opponents, and losses against the top ones.

After a 2-1 start, it sure did look like that was going to come to fruition. It wasn’t going to inspire huge confidence in Pruitt, but it was going to meet expectations and signal a growing program.

After a 2-2 start with the recent loss, I think it’s time to start asking how much growth they are really showing.

We cannot deny that this bizarre coronavirus offseason has completely changed trajectories. There are teams who expected to compete for conference titles, who are now aiming for .500 records. Why? Because they either lost players who opted opt due to the circumstances, or had an offseason that was so limited, they were under the impression they were not going to play a season.

We can more or less confirm that members of Tennessee’s program were part of that group who genuinely thought they were not going to play a 2020 season—and while I can’t say for certain, we can probably extrapolate that the idea of playing one seemed fairly difficult in their eyes. Because even with an experience factor, you’re still missing valuable time that you can use to really identify what your teams strengths and weaknesses are.

So I’m not going to take this 3rd season with as much weight as I would have in a regular year. I think it’s foolish to do so. Right now, there are only three teams who came as advertised: Clemson, Alabama, and Georgia. Three teams who have played for a national championship in the past five years, and who have had a high level of success.

But I do not think we can call this a total throwaway year. Because there are observations you can make which speak to a coaching staff’s ability to both motivate their players and put them in the right position to succeed.

We did not see that against Kentucky on Saturday.

So where does that leave us?

Well, that leaves us with a coach that is 15-13 overall, who is still struggling with the offensive side of the ball, and still looking for someone who can play well enough to alleviate pressure from a good-but-not-great defense.

He’s also a coach that has greatly improved the defense from when he started, raised the overall roster talent, and reinvigorated commitment to the program.

But you can only give hope and promise for so long. There’s still plenty of time for the 2020 season to give us more clues about what the future holds for Jeremy Pruitt. But right now, I think it is very fair to say the 2021 season is going to be his make or break a year.

Could he conceivably get fired if 2021 is bad enough? Maybe. It’s not impossible. More likely however, I think it’s going to be either the canary in the coal mine, or the shot in the arm.

If the Volunteers succeed, it will convince the program to stay the course and continue giving him more time. But if they remain stagnant, I do think he becomes a lame duck coach. And once the season concludes in that scenario, the job hunt begins.

If you didn’t bother to read all that and just want the short answer to the question I posed in the title: Not yet, but soon.

(Side note: Ever taken a long drive after a Tennessee football loss? Probably the best way to clear your head and just think about what you just witnessed. Try to avoid Interstate-40 though.)