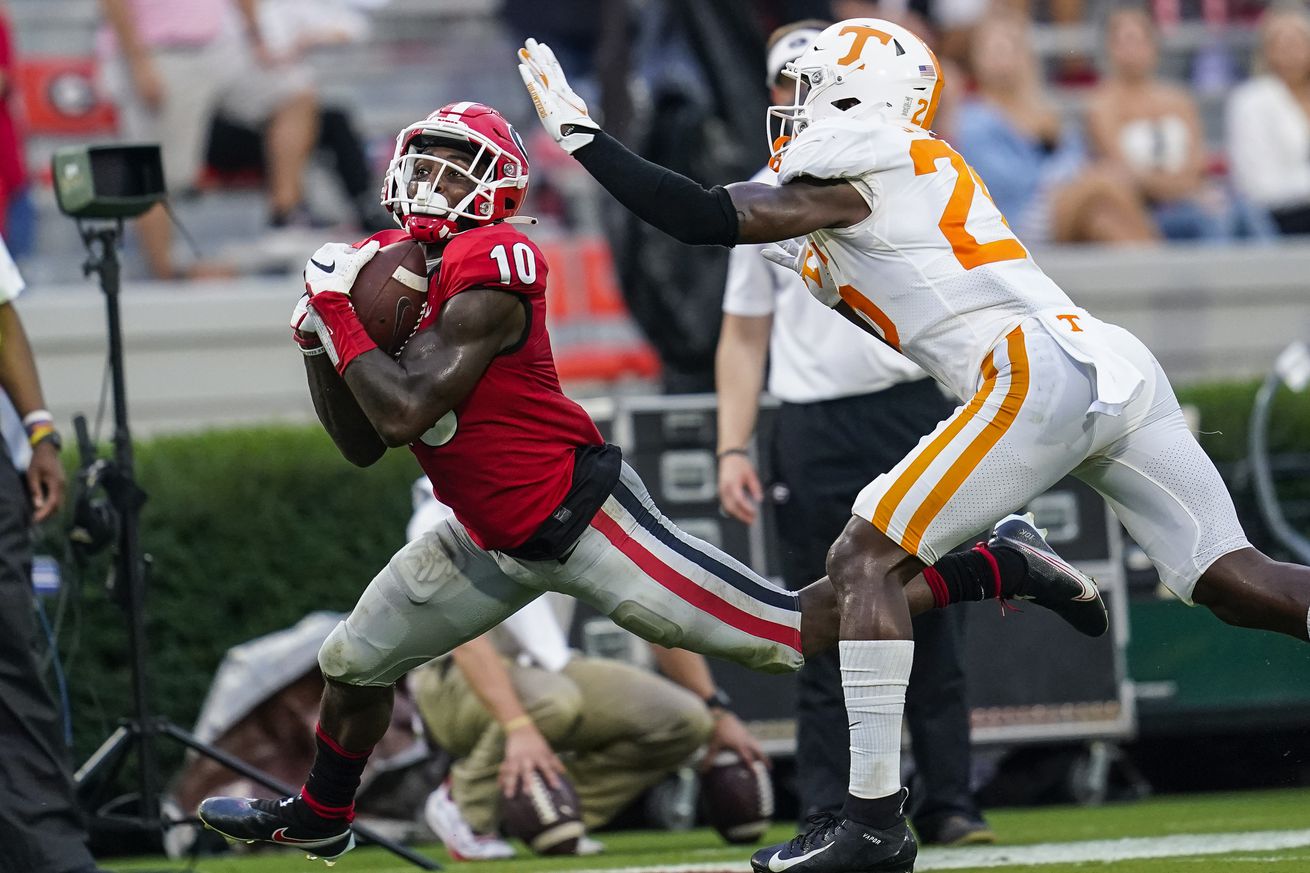 A clear area of weakness.

Against Georgia this past Saturday, Dogs’ QB, perhaps a little surprisingly, Stetson Bennett tuned the Vols up, scoring three total TDs by going 16-27 for 238 yards, two TD and then another 10-yard touchdown scamper. He and the UGA WR’s throw game made the Vols DBs look like they were out there playing some poor two-hand touch or running some lax (as in bad and not as in lacrosse) 7-on -7 drills.

Stetson hurt the Vols initially with the TD run — I STILL can’t get a replay of the game to re-watch, but the end result was Stetson diving over the pylon for a score, much to the dismay of poor Jeremy Pruitt’s headset (keep an eye on Pruitt at the end of the play). Shame on you, Jeremy. #HeadsetLivesMatter, too.

Jeremy Pruitt spiked his headset after Stetson Bennett scrambled and ran for a touchdown.
Bottom of the frame. pic.twitter.com/yg9oVHhCLn

I think Pruitt’s earpiece/mic met it’s untimely demise because the refs missed an egregious block in the back on UGA’s George “he ain’t no Carl or Boone,” Pickens. that set Pruitt and UT DB Bryce Thompson into fits of extreme irritation. (Top left of the image, where Pickens looks like he should have ABSOLUTELY asked for affirmative consent and taken Thompson for dinner before mounting him like a cowboy mounts a horse.)

This missed call and TD run aside, Stetson’s ability to take a flamethrower to everything between the numbers on near and far side field is really what cooked Tennessee’s goose.

According to PFF, Stetson’s the 24th ranked QB in the country, and you, me and every Georgia fan knows he isn’t the 24th-best QB in the country. I haven’t seen UGA’s other games, but Georgia’s game plan to attack the Vols in the short and intermediate middle of the field, and Stetson’s execution made for disastrous results for Tennessee.

According to PFF, Stetson was:

Me being me, this is dangerous, but I’ll save you the trouble and do the math. That’s 11-14 for 158 yards and a TD. Again, his total stats for the game were 16-27 for 238 yards and two TDs. I refuse to do anymore math and give you percentages, but that’s very clearly where Stetson did the most damage. Part of the problem, though all the problems are interconnected, and the following numbers contribute to Tennessee’s pass rush not making Stetson uncomfortable, often enough, to rattle him. Stetson was 14-21 when he faced no pressure, tossing for 186 yards with two TDs and an 8.9 (!) yards-per-attempt number. Below the border, that’s known as “no bueno.”

The non-pressures make it easier to execute the game plan to attack the middle of the field, just like the offensive line’s performance didn’t help JG or the running backs.

Defensively, the responsibilities typically fall on linebackers , safeties or nickel backs, depending on the depth of the passes. Though in man coverage, the outside CBs are often chasing wideouts across the middle.

Star MLB Henry To’o To’o got a 57.2 coverage grade from PFF, while fellow MLB Jeremy Banks got a 34 grade which was the worst coverage grade by any Tennessee defensive player. Outside CB ‘Tae Taylor got the second-lowest grade at 41.3, safety Theo Jackson got a 41.5 number and star/ nickel player Shawn Shamburger graded out at 54.2.

Somewhat surprisingly, LB Quavaris Crouch led all LBs with a 72 coverage grade out.

As I’ve said this is all interconnected —- what a tangled web we weave — but the Vols have to do better defending the middle of the field.