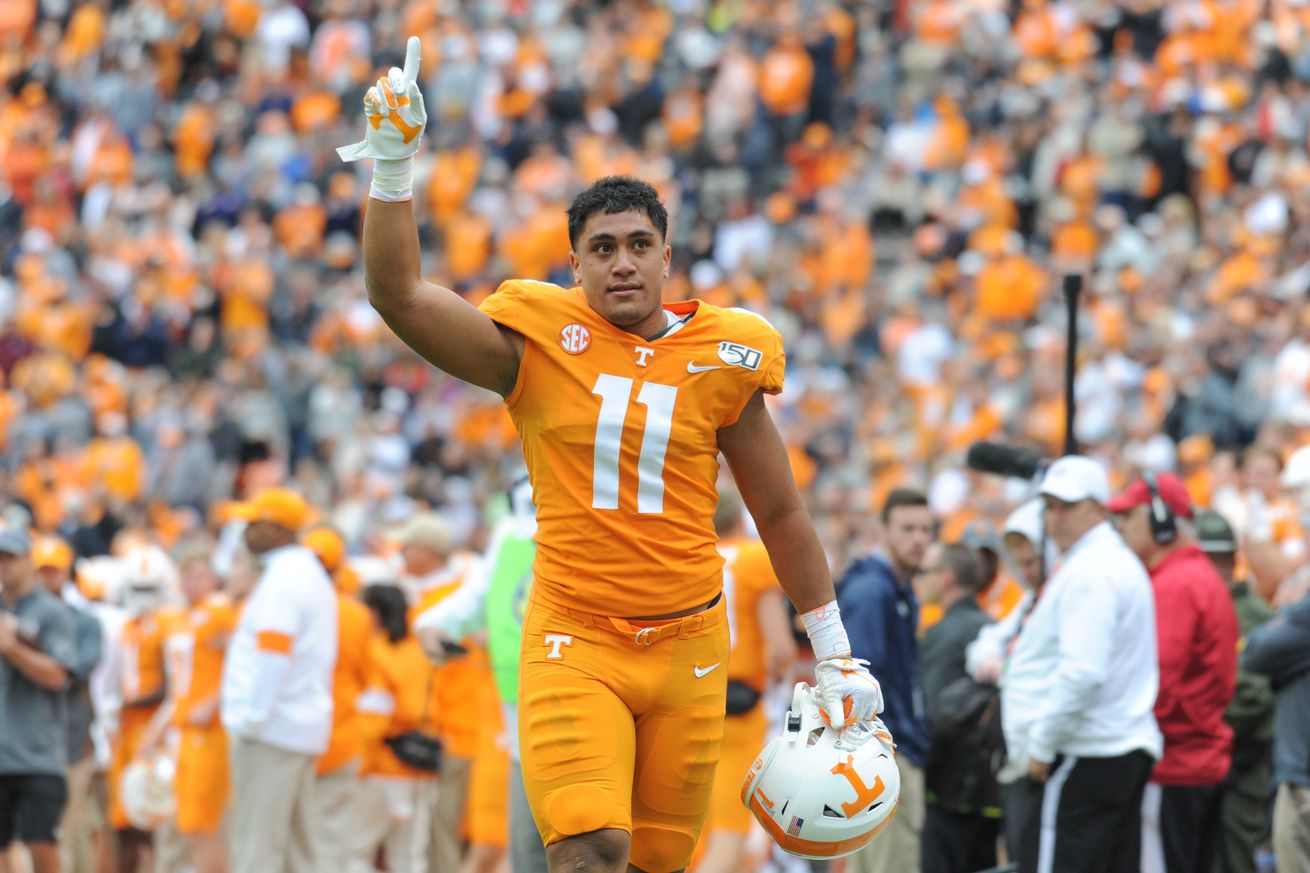 The defense is in good hands with To’o To’o. | Randy Sartin-USA TODAY Sports

The true sophomore knows that it’s time for him to step it up this year.

Anyone who has ever paid one iota to the game knows this. Someone has to hold others accountable, someone has to keep the team together, someone has to make sure that everyone is on the same page — along with many other responsibilities.

It’s a tough gig and it’s certainly not meant for everyone. The Vols are currently looking for a new leader on defense after the departures of Daniel Bituli and Darrell Taylor. Fortunately, they have someone who is more than willing to step up and be that guy.

In case you don’t read headlines (or are devoid of context), that guy will be Henry To’o To’o in 2020. The second-year linebacker sat down with reporters via Zoom on Thursday to discuss the offseason and his thoughts on the upcoming season. He was eventually asked about leading the defense and responded in a fashion typical of himself.

“I feel like I can do a lot more,” To’o To’o humbly said. “I feel like since I saw Bituli lead, since I saw the way that he did things on and off the field, he did everything right. So I just want to be able to do what he did. He showed me the ways and I want to excel at the expectations from him.”

To’o To’o is already showing that he can speak up when needed. He was one of the first Tennessee players to speak up in favor of playing the 2020 season after the Big Ten and the Pac-12 decided to cancel football. For To’o To’o, it wasn’t just about him wanting to play, it was about his teammates, as well.

“We’ve been through so much the past three months. We’ve done so much to be able to get to the point where we’re at now. So a lot of people have felt that way. It’s been that way for a while. For me, it was I put so much work in, done so much to get to the point where I’m at now, to come back from campus and be able to feel confident in the medical staff which they’ve done a tremendous job of keeping us updated. It’s normalcy for us, to be able to play ball, to be around the people we love. To be able to do the thing that we love, come out here and play ball. So that’s kind of the biggest reason why it was for me.”

Where does this confidence come from? Well, an outstanding freshman year will certainly instill confidence in a football player, but it also has to do with another year in Jeremy Pruitt’s system. Now that they know what is expected of them, all they need to do is go out and execute.

“Our defensive unit, we know what the coaches expect now. And we also know what we can do. That’s kind of the biggest thing. We’re trying to be the coaches on the field. We know the knowledge the coaches know. So now it’s just on us to be able to go out and execute it and be able to make the calls. We know all the plays in the playbook. Now it’s trying to focus on the little details that we have. Just being able to execute, that’s the biggest thing. You know what you’re doing, but just go out there and execute now.”

In a year of uncertainty, one thing is for sure when it comes to the Vols: They are in good hands with To’o To’o.