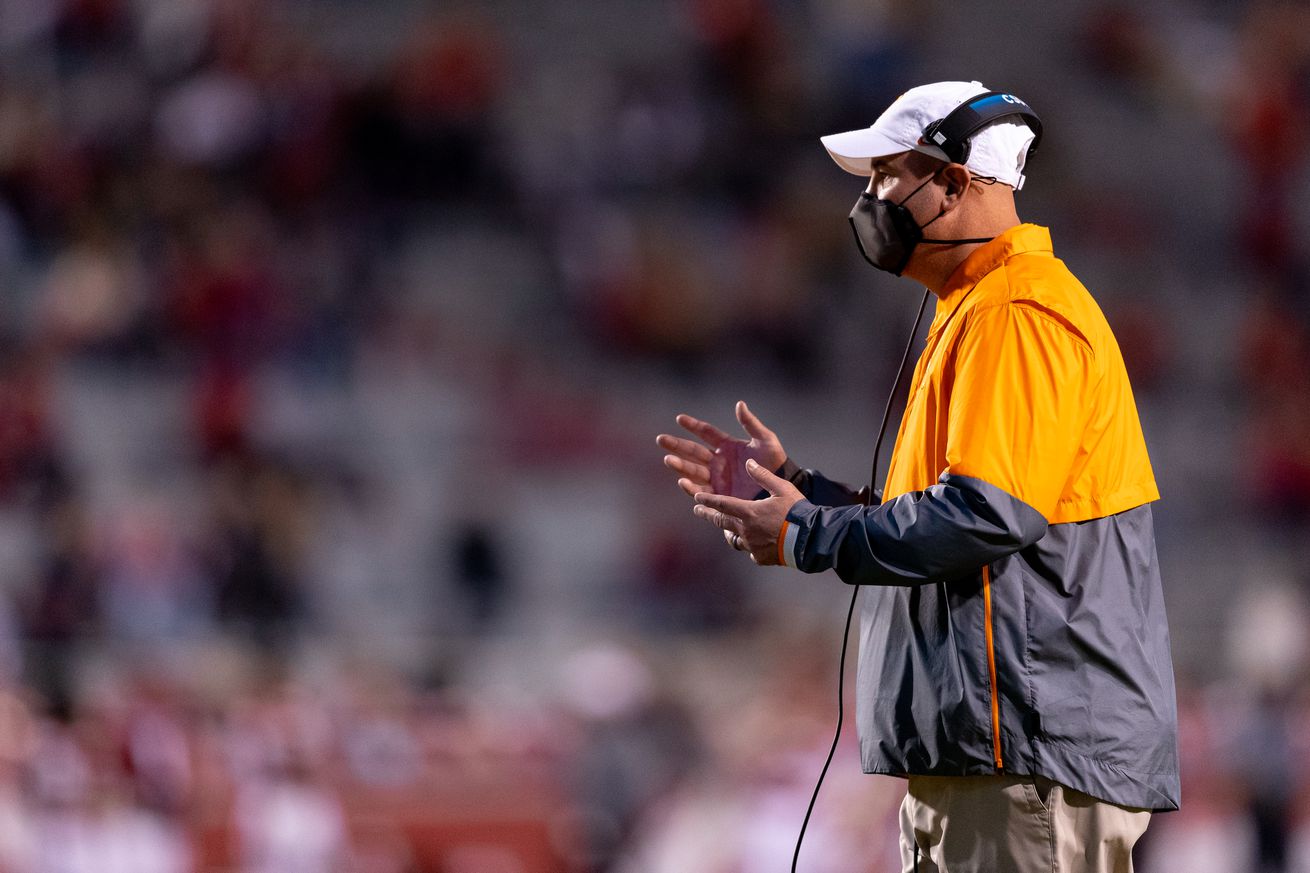 The sun is setting on Pruitt and co.

When Jeremy Pruitt was hired in 2018, it was clear that he signed up for a tough job and that it was probably going to take some time just to make the Vols competitive again.

Year One saw Pruitt snap Tennessee’s losing streak in the SEC and Year Two saw the Vols go on a six-game win streak and win a bowl game over the Indiana Hoosiers. Both years aren’t what Vol fans consider the peak of Tennessee football, but you could see what Pruitt was trying to do and what he wants to accomplish when it comes to running a football program.

But there appear to be more questions than ever halfway through Year Three.

The Vols came into 2020 with the expectation to compete in the SEC. We aren’t talking beating Georgia, Florida, or Alabama. We are, however, talking about building off a 2019 season that saw the Vols finish with a winning record in SEC play for the first time since 2015 and just the second time in the last 14 seasons.

Everything appeared to be on track after the first two weeks. Since then, the wheels have come off. The Vols can’t do anything right and there’s no one else to blame but this coaching staff.

You don’t have to look very far to see what competent coaching and proper development of players can do for a program. The Vols just encountered that against the Arkansas Razorbacks. The Hogs not only outplayed the Vols in their 24-13 win on Saturday night, but they outcoached the Vols, as well.

Just look at what happened after halftime. Tennessee was up 13-0, but saw Arkansas rip off three touchdowns on three straight drives to go up, 21-13. Sam Pittman and co. identified their issues, corrected them, and then put their players in the best position to win. And it worked.

And this is a team that didn’t win an SEC game for two years heading into 2020. Two. Years.

Arkansas was supposed to be the conference’s doormat. No one had any expectations for them, but here they are, beating teams that they aren’t supposed to beat and looking like a solid SEC team.

It’s quite the contrast from where Tennessee is right now. The Vols are staring down the barrel of a 3-7 season after their most recent loss.

Is that acceptable in Year Three? Even with all of the COVID-19 issues surrounding the season, there is no excuse for what we’ve seen from the Vols this year.

There are failures all over the roster. Quarterback. The offensive line. The defensive line. The linebacker corp. The secondary. The worst part about all of it is that nothing is improving. Jarrett Guarantano gets benched on a weekly basis. The offensive line continues to have lapses and can’t play a full four quarters. There is no pass rush. And of course, the Vols can’t guard the middle of the field to save their lives.

And it’s not like the Vols aren’t recruiting, either. They have the talent to shape a formidable roster, but it simply hasn’t happened in three years. This is one of the highest-paid coaching staffs in the country, as well. The resources have been applied, but the rest hasn’t.

It’s also not just the fact that the Vols are losing, but it’s how they are losing. Tennessee finished the 2015 season —Year Three of Butch Jones— with an 8-4 record. Those four losses came to Florida, Arkansas, Alabama, and Oklahoma. So, the Vols weren’t beating the top dogs, however, they lost those games by a combined 17 points and all four losses were one-possession.

The Vols have lost their four games in 2020 by an average of 23 points and all four losses have been multi-score defeats. The closest Tennessee has come to being competitive against a top SEC team was Guarantano’s fumble at the goal line against Bama in 2019.

There’s been a regression at some point every year and that’s not the sign of building a program. You should see progress every year and we’re simply not seeing that.

So, it’s time to start thinking of an exit strategy for Pruitt and his staff, unfortunately. He is officially on the hot seat after the Arkansas loss and it’s deserved. If the Vols continue to play and coach like this for the remainder of the season, then it’s time to start looking for yet another person to pull this program out of the depths of football purgatory.