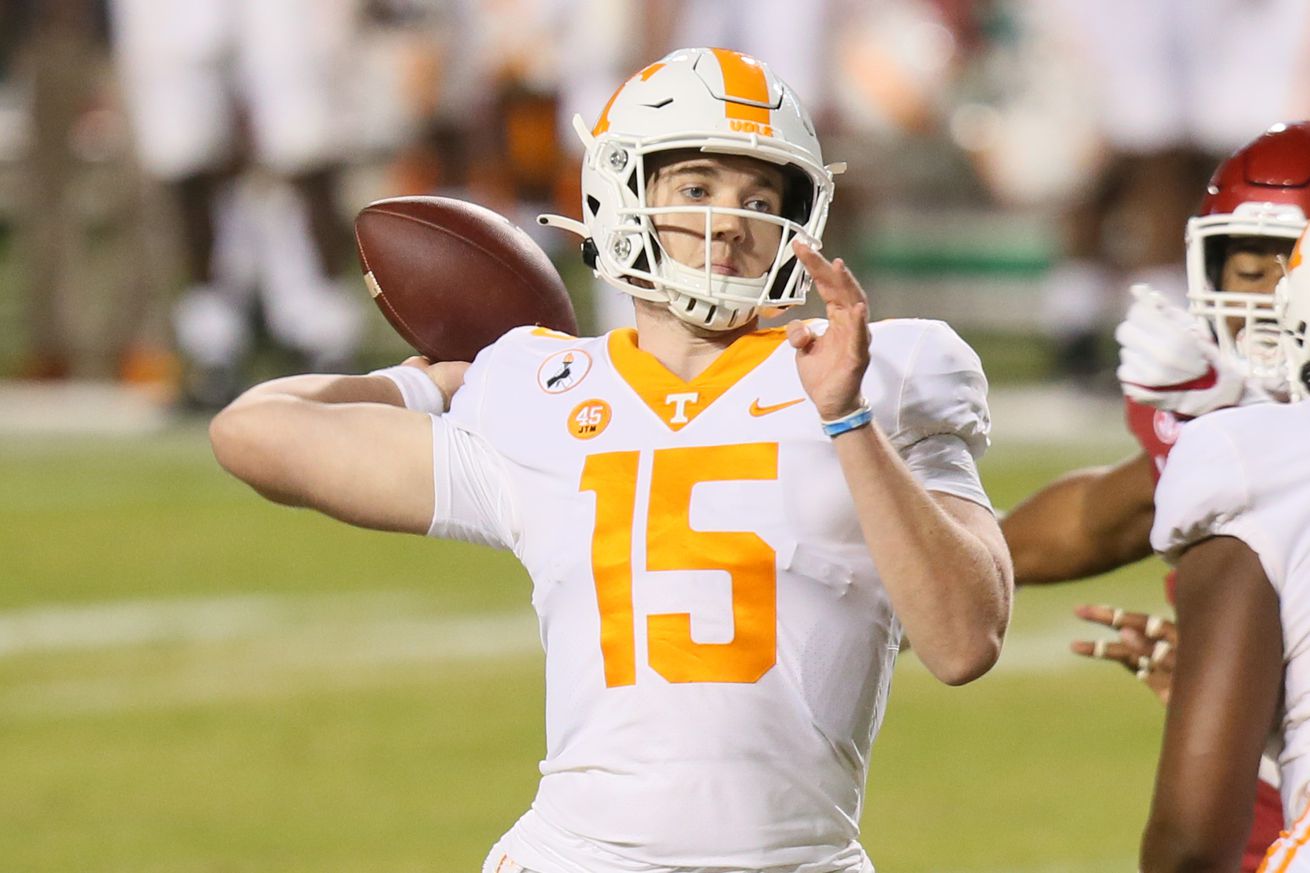 Maybe, just maybe, another gut-punch of a loss coupled with a surprise bye week to further develop a few freshmen will spur some lineup changes for Tennessee as they head into a matchup with the Auburn Tigers. Tennessee’s game with Texas A&M was postponed last week, opening up another opportunity for the staff to toss some youth further into the mix.

The main position of interest, of course, is the quarterback position. Jarrett Guarantano has maintained his starting position this season, despite a rough season. The staff has continually blamed that decision on a lack of development from the younger quarterbacks, which has been a result of quarantine issues, a canceled spring and a few injuries.

However, Brian Maurer and Harrison Bailey appear to be finally be full steam ahead, at least in practice sessions. Jeremy Pruitt updated us on Monday about what they were able to accomplish last week.

“This past week our team was really disappointed about not getting a chance to play,” Pruitt told the media via Zoom. “I thought we put three really good consecutive practices together. Harrison Bailey had a really good week along with Mauer and J.T. It was good to get Jimmy Calloway, Jimmy Holiday and Malachi Wideman extra reps.”

As I wrote on Sunday, tossing those younger players into the lineup could be a way to jumpstart this struggling offense. It may not be pretty, but the current situation can’t get much worse. It’s past time to try something — anything — different.

The biggest decision Pruitt has left to make this season is at quarterback, specifically whether or not to start the Harrison Bailey era. Bailey entered the game in relief of Maurer against Arkansas after he failed to complete any of his four attempts. It was a tough spot for the true freshman, one that was difficult to take anything from.

With another week off, Pruitt noticed one key area of improvement from his young quarterback.

“Just command,” Pruitt said. “When you are comfortable doing something, running an offense, whatever it is, you have confidence. Your peers can see it. You can’t fake confidence. It’s either natural or it’s not, and that’s not to take anything away from him, but the more you do something, the more comfortable you get at it and the better you feel and the more confident you are, and you can see that. The simplicity of communicating the calls all the way across the board. You’re talking about a young guy sitting here and you got to tell Trey Smith which guy he’s supposed to block on this run play right here. ‘The MIKE is 42 or whatever, we’re working 42.’ Just some of that.”

It remains to be seen whether or not Bailey did enough to earn the start on Saturday. That decision may come down to the health of Guarantano, who is coming off of a head injury two weeks ago against Arkansas.

Guarantano has returned to practice, but it’s unclear what his status will be heading into the weekend.

“He practiced yesterday,” Pruitt said of Guarantano. “But all of the other guys took a lot of reps over the last three practices. We’ll see how the rest of the week goes here.”