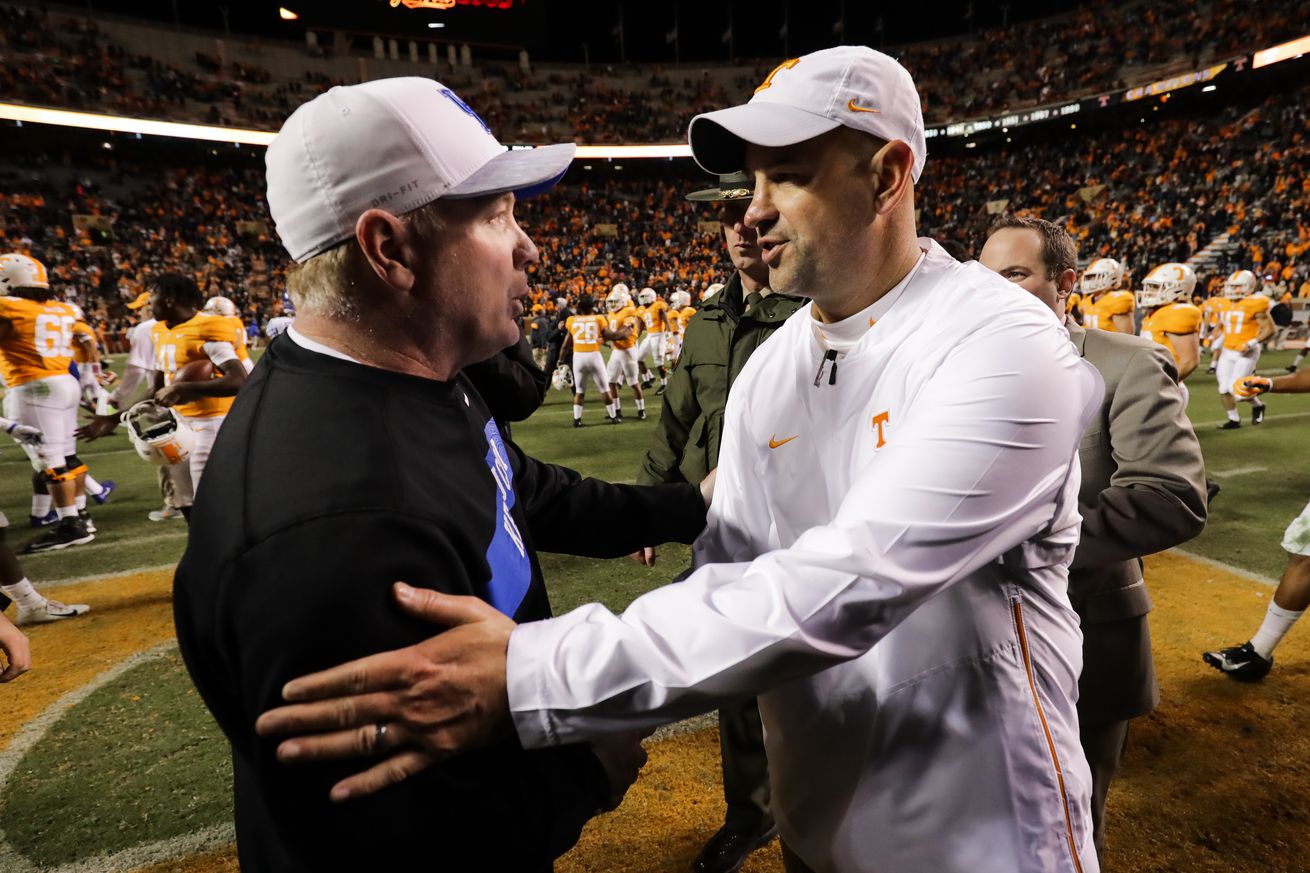 The No. 18 Tennessee Volunteers will try to bounce back on Saturday against Kentucky, following a loss to Georgia. It’s a series that the Vols have dominated through the years, but the Wildcats have kept things close in recent years.

Mark Stoops has brought a level of consistency to Lexington, something they haven’t had in some time. Tennessee found a way to win last year, but it took a goal line stand in the closing moments to do so.

Stoops has installed an identity for the program — toughness, defense and an ability to run the football. On Wednesday, Jeremy Pruitt discussed the Wildcats.

Four straight bowl appearances and 18 wins over the last two seasons, it’s tough to not be impressed with the job Stoops has done.

Kentucky lost Lynn Bowden from last years team, who was a one-man show on the offensive side of the ball. Quarterback Terry Wilson is back in action, leading the Wildcats in both passing and rushing attempts on the year. Christopher Rodriguez and Asim Rose lead the backfield, creating a three-headed rushing attack to deal with.

“The first thing that you look at in an Eddie Gran offense is their physicality,” Pruitt said of Kentucky’s offense. “They’re committed to running the football, and they’ve had success running it against everybody. The creativity that he does each week and how he does it is very impressive to me from a conceptual standpoint, just watching them and studying them. It’s a huge challenge for us, but I think Eddie does a phenomenal job.”

Kentucky ran for over 300 yards on Tennessee last season, but threw for just 25. In total, Gran’s offense mustered only 13 points on the Vols’ defense. Gran has more ability to utilize the passing game this season with Wilson back, but make no mistake — Kentucky is going to try to keep the football on the ground.

Stoops hangs his hat on the defensive side, which is something Tennessee got a taste of last season. The Vols only scored 17 points in Lexington, just barely doing enough to come out with a win. So far in 2020, Kentucky is credited with the 23rd best defense in the NCAA.

For Tennessee, coming off of another tough defense in Georgia, the offensive line and Jarrett Guarantano will have a tough task ahead of them if they want to bounce back.

That defense was put to the test against Lane Kiffin’s Ole Miss offense, which was able to score 42 points in an overtime win over Kentucky. However, that same group bounced back in the following week and held Mississippi State to zero offensive points, beating Mike Leach’s team 24-2.

The oddsmakers like Tennessee by about a touchdown in this one.

The Volunteers and Wildcats will kickoff at noon ET from Neyland Stadium, live on the SEC Network.