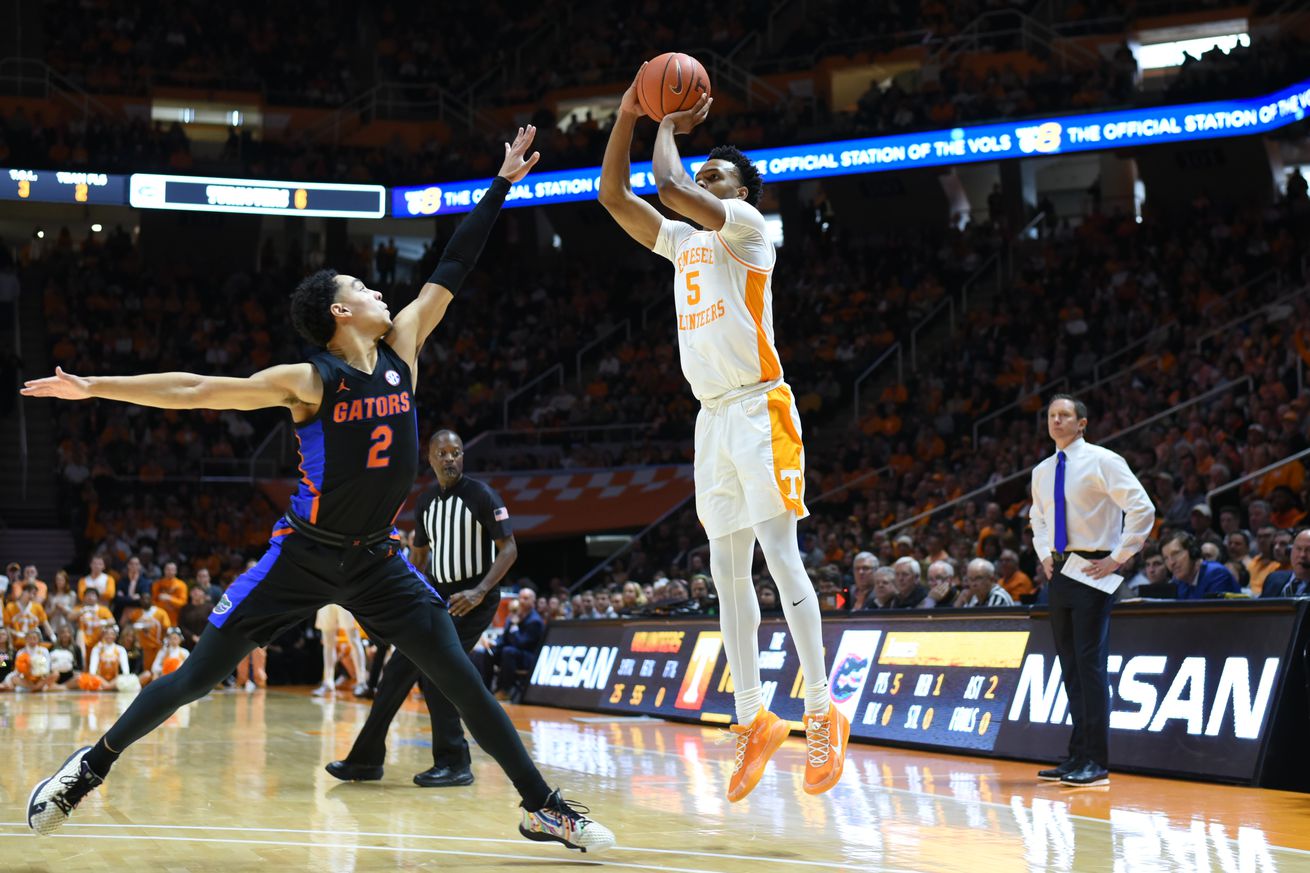 I have a somewhat interesting theory for you guys: Despite the two incoming freshman 5-star guards, Keon Johnson and Jaden Springer, 4-star Corey Walker (reminds me of Tyler Smith), newly eligible guard Victor Bailey and EJ Anosike, the double-double machine, grad transfer from Sacred Heart all joining the team, could Triple-J Josiah Jordan James be the team’s X-factor this season?

Look everybody is so caught up in football that I feel like what could be the most talented basketball team Tennessee’s fielded in, well, years, is being overlooked.

Sure, we’re still a couple weeks out from the season starting and everything is in flux thanks to the COVID pandemic. But, guys, this team could be really, really good.

And a significant jump in Triple-J’s play could provide the biggest jolt to this team’s ultimate destiny.

James was the first of Barnes’s recent run 5-star guards to join the team, the highest-rated signee in the 2019 class that included Santi Vescovi, Davonte Gaines and Oliver Robinson Nkamhoua. He was listed as a 6-6 combo guard and rated the No. 22 player in the nation.

But his freshman season was a bit, uhh, bumpy. He arrived to UT with what looked like a college player’s frame, but various injuries clearly affected his development. If I’m not mistaken, he dealt with a preseason injury of some sort and then missed four or five games thanks to a groin injury.

Last year’s team was supposed to be head-lined by two senior guards in Lamonte Turner and Jordan Bowden, an early injury cut Tuner’s season short, and I think it’s fair to saw Bowden didn’t have the season we expected from him.

But you guys know we never look at just the season averages because they don’t tell the whole story. It’s kinda like reading the back of a book you want to buy — it may give you a general idea, but you never really know till you crack that book and read it.

Five players logged more than 500 minutes for Tennessee last season, and of those five players Triple-J posted the best rebounds (7.4) per 40 minutes of anybody on the team not named John Fulkerson (7.8). Now those numbers likely reflect Tennessee’s absolute lack of any kind of inside game — besides Fulkerson and 6-6 Yves Pons — but they also give perhaps a peek at where James can contribute this season instead of/ or while vying for minutes in the all-the-sudden-very crowded Vols’ backcourt. His 3.4 TOs per game were second-worst in the group of 500-plus minutes players, behind early-season TO machine Vescovi who finished with 4.7 TOs per 40 minutes.

What’s maybe most troubling is that he had the fourth-lowest usage rate of the five 500-plus minutes players at 17.7 percent (Vescovi led the group with a 23.7 percentage), but he posted a 24.9 TO percentage that ranked second-worst on the team.

So, the numbers tend to say that perhaps he’s not suited to run the point and is perhaps more useful on the wing where he has a chance to crash the boards, get some rebounds and possibly extend some possessions for the Tennessee offense. In fairness, he did post the team’s second best assist percentage at 19.9, more than six percentage points lower than the team’s leader, Vescovi (26 percent).

Also, for what it’s worth, so we get a full and comprehensive picture, he posted the main-fives’ worst True Shooting percentage and Effective Field-Goal percentages at 48.7 and 44.8, respectively. Those percentages take into account the field goals a player attempts but also maths it into including FT percentages and working in that a 3-point basket is better than a 2-point basket.

So I guess the question is: what’s his role next season now that both the front court and the back court’s talent level have been bolstered. Where does he fit in? Can he up his 3-point percentage and become a player in the 3-and-D mold that’s become so essential for NBA teams? Does he play the wing? Or will Barnes trust him with the ball in his hands after an injury-free offseason to try and mitigate the TOs from the PG position?

I had hoped to include snippets of from his highlights last season, because I don’t want the overall tone of this article to be negative toward TRIPLE-J. If anything, I’m excited at his versatility and the prospects of seeing some true offseason development. But I can’t get any of his highlight videos to play on YouTube. So, I reckon, it is what it is.

Here’ some things I did find — this one showing a nice, step-back 3 from Triple-J. Doesn’t create James-Harden-like space with the stepback, and maybe it’s just me but his release looks a bit odd. Nevermind, it went it, so I’ll shut up.

As always, I live to hear how you guys feel in the comments. I know — football sucks. But basketball doesn’t, so like come back to the light. It’s warm and nice and not depressing.

You’ll be judged by what you do when nobody else is watching.

The gift Josiah gave Daemeon on a whim after driving by his house, much more, than a pair of shoes. pic.twitter.com/c677eaPVNH