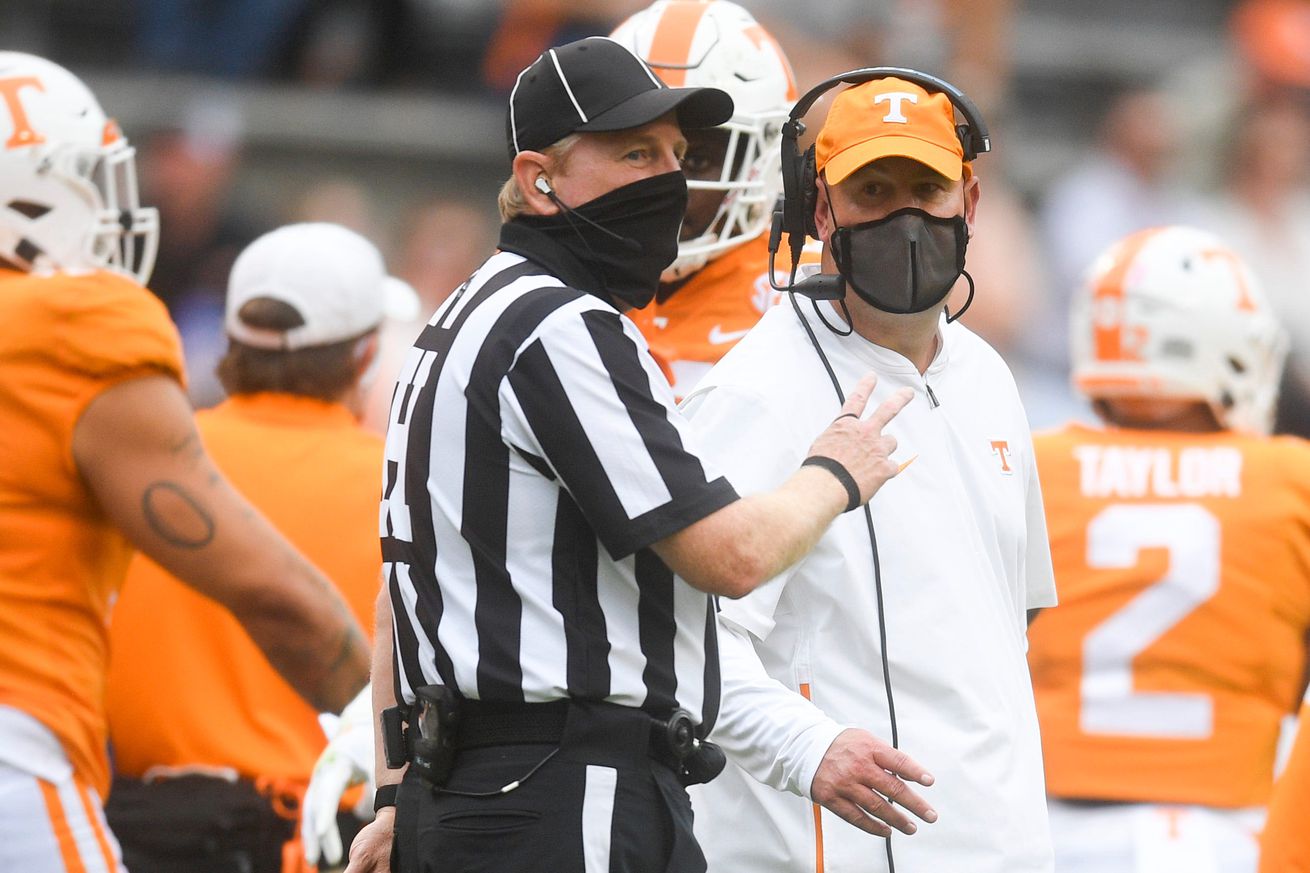 Up 13-0 at halftime, Tennessee fans felt pretty good. But boy, did things ever change.

Arkansas came roaring back in the third quarter, almost instantly erasing that lead. The Razorbacks took a 14-13 lead of their own, then quickly hit a deep throw down the sidelines to move to 21-13.

Coming out of the halftime break, it was clear which coaching staff had the upper hand. That’s been a theme of the year in the second half, going back to week one. South Carolina rebounded to take the lead to open the year, and we all know what happened in Athens against Georgia.

It was a far too familiar feeling — a feeling of helplessness. A feeling of being overmatched, this time by an Arkansas team that won two games last season. The Razorbacks are improved, but this is a game you can’t lose in year three if you’re Jeremy Pruitt.

Sam Pittman and the Arkansas staff coached circles around him.

Kendal Briles, a guy that Pruitt interviewed after the 2018 season for his own offensive coordinator position, found plenty of holes in his own scheme.

Tennessee’s defense had no answer for a simple slant route in the second half, this coming after pitching a shutout in the first half. That slant powered the Razorbacks to a commanding lead, one that the offense couldn’t overcome.

Speaking of the offense, this may have been Jim Chaney’s worst game at Tennessee. He was committed to the ground game in the first half, but got away from it when things hit the fan in the third quarter. When Brian Maurer entered the game, it was clear he had zero confidence in his sophomore passer.

Things got even worse when Harrison Bailey entered the game. The five-star freshman entered the game for Maurer and did nothing but hand the ball off — until a fourth down arrived. His first pass came on fourth and four in a pressure-packed spot, and was tipped and picked (after an uncalled pass interference) in a spot where the Vols had to have points.

So instead of choosing to cut the lead to a one score game with a field goal on fourth down, Tennessee went for it with their freshman quarterback who hadn’t thrown a pass all night. That decision just defies every ounce of logic.

As it turned out, Tennessee got the ball back with a chance to score a touchdown at the end of the game. This is basic stuff, too — take the points and cut it to a one-score lead and stay alive.

Jeremy Pruitt on not kicking the field goal late: “We weren’t close enough.”

It would have been a 42 yard field goal for Brent Cimaglia, who had hit from 50 and 48 earlier in the night.

It was just the latest example of frustrating 2020 moments for Pruitt, who now feels his seat beginning to warm. With Texas A&M, Florida and Auburn left on the schedule, there aren’t many chance to get this right.

Tonight was a matchup of two fairly even teams. In the end, coaching won out. In year three, that’s a massive problem that Phillip Fulmer might just have to address.