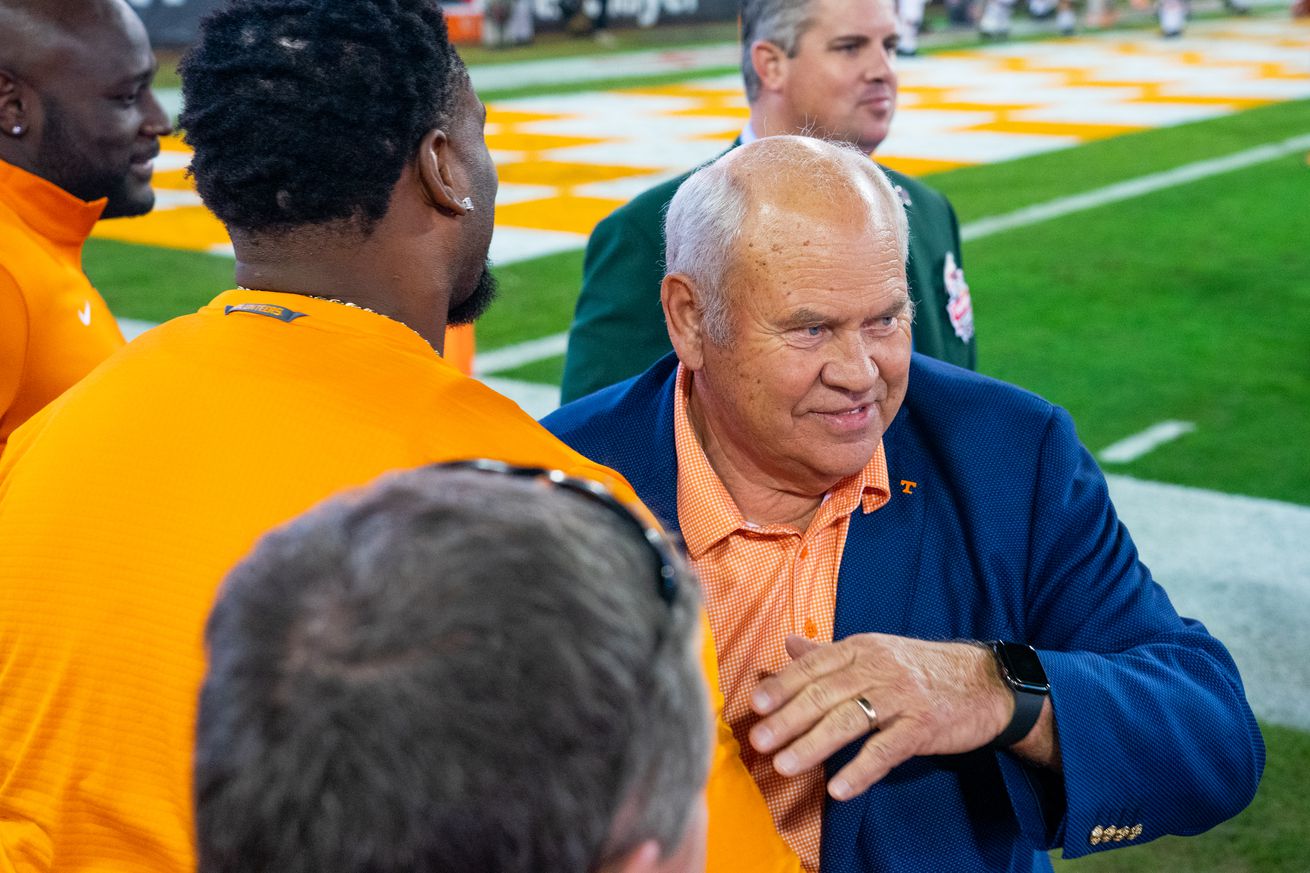 What to make of it all.

Much has been made recently about the decision of members of the Tennessee Volunteers’ coaching staff to refuse pay cuts. Sometime around Friday, news came down that eight members of the coaching staff declined pay cuts, with the exception of Jay Graham and Tee Martin, the only two Tennessee-lifers, as it were. (Head coach Jeremy Pruitt forfeited his scheduled $400,000 raise for this season.)

When I first saw this news, I didn’t think much about it. I certainly didn’t think it would blow up into what it has become, prompting Pruitt to remark that the situation is “fluid,” also stating that the book isn’t closed on the issue. The reason for the pay cuts is to save money in the athletic department, allegedly to keep from having to layoff other, less prominent employees within the department.

Apparently, pay cuts for employees earning between $50,000 and $100,000 were five percent, while those earning greater than $100,000 saw 10 percent cuts. Among those refusing cuts is offensive coordinator Jim Chaney, who earns $1.6 million this year.

As I stated, my initial reaction was to simply move on and not care, but folks on Rocky Top are certainly aggravated, if not outright outraged, over these recent developments, especially in light of a team that can’t seem to win a game. The Volunteers are barreling towards a 3-7 finish and, with the way Vanderbilt played Kentucky – a team that took the Vols to slaughter in Neyland – it isn’t inconceivable that Tennessee drops eight straight to finish its season, going 2-8.

Fans expect that the least the staff could do is make some monetary concessions in order to help the rest of the athletic department and employees whose jobs are at risk, especially those like Chaney who would see a $160,000 reduction on his $1.6 million pay.

In further cementing himself strongly in the minds of Vols’ fans, Martin simply said, “It was the right thing to do,” according to 247sports. He went on to say that nobody was “right or wrong.”

Further adding fuel to the fire is that contracted employees, like the coaching staff, weren’t subjected to automatic cuts in the same way at-will employees were, who all received automatic cuts.

The more steeped in information I become about this “fluid” situation, the greater my personal understanding grows. While an argument founded on morality might be applicable in this scenario in order to help others, to expect a group of people to take pay cuts is quite a large expectation. We have a tendency to single out individuals for not helping the cause, while larger enterprises, like the athletic department and university at large, skirt by without scrutiny.

When the university makes these types of choices which affect the individual, we file it under “what needs to be done.” Meanwhile, if the individual has a choice in the matter, we revert to the trope of them needing to be a team player. While I understand the gripe of the fanbase, I find myself asking: Why is it incumbent upon the individual to make concessions rather than the greater enterprise, corporation, or university?

While it’s easy for us to disagree with the coaches who opted to refuse pay cuts, none of us are in the position to make that choice. While the staff deserves no sympathy from the fanbase, to suggest they should behave in a certain way because the rest of us are less fortunate is irresponsible.

I think fans are right in ascertaining whether or not the individuals in question care about the athletic department, university, and city based on whether or not they agree to pay cuts, but I also suspect much of the anger being channeled into the issue is simply a diversion from what most fans are actually upset about: Not winning football games.

In the meantime, fans can choose to support those who did sacrifice for the greater good of the athletic department, like Fulmer, Barnes, Harper, and Vitello. When men’s and women’s basketball get rolling, and when the baseball season begins, that would be the perfect time to show support for those programs instead of focusing all your energy negatively into what members of the football program should’ve done, but failed to do.

With all that said, the Volunteer way is to show support for your colleagues, peers, and those who make the proverbial ship go. So, for non-Tennessee alums on staff, the perception that they don’t actually care in a real way about the university or athletic department was confirmed in the eyes of many.

Whether or not you agree, disagree, or don’t care about the pay cut saga, the University of Tennessee football team might have just lost the rest of the fanbase which had Pruitt and Co.’s back. The ill-will has spawned and is widespread. The coaching carousel continues to turn. Tennessee isn’t done with Pruitt and his staff — at least not all of them and not yet — but the sun has begun setting. The pay cut debacle might simply be catalyzing the process. When will the Tennessee carousel halt spinning? With the latest chapter being written, we can only be left asking: What can this program do right?