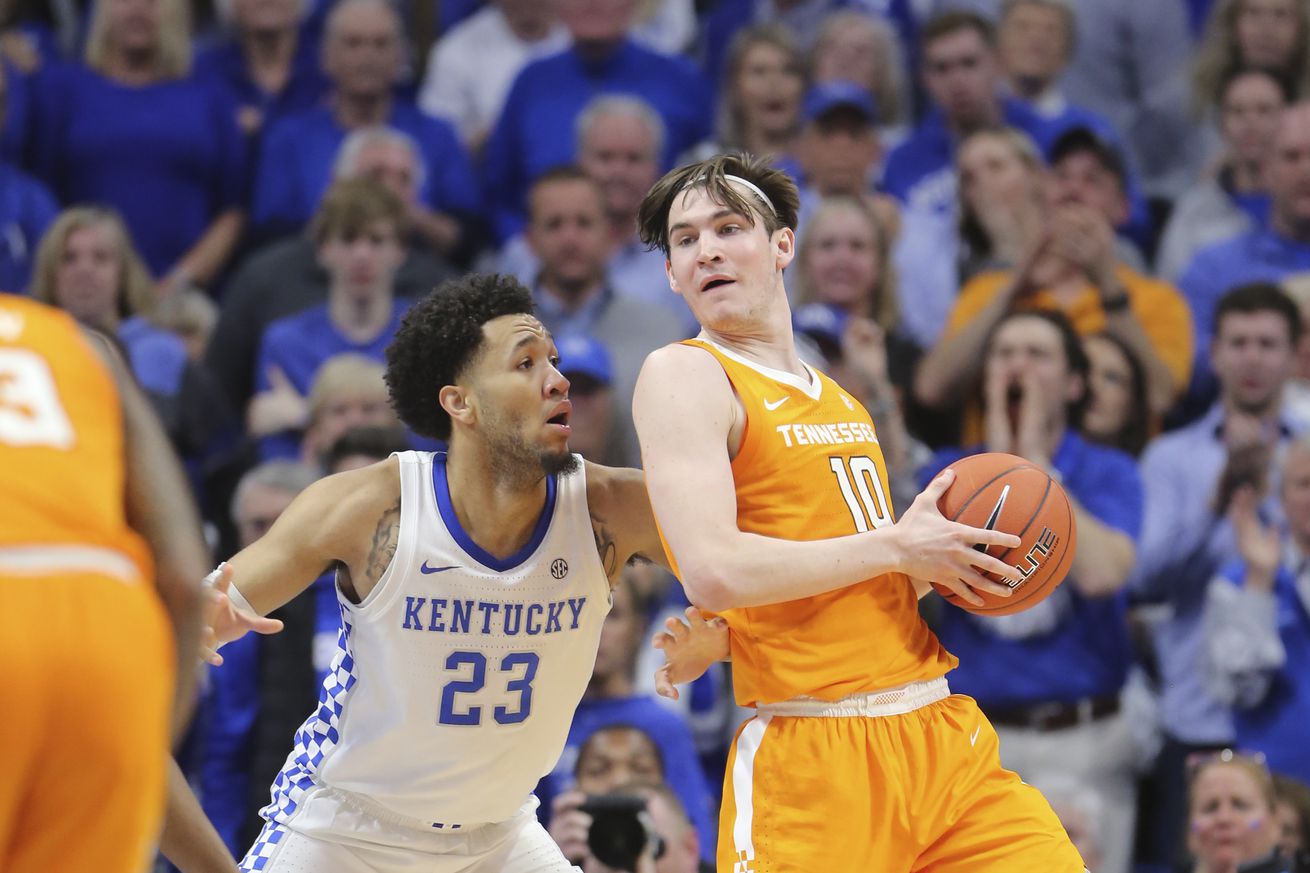 A look back at the season.

Tennessee’s 2019-20 season was one of transition, development and frustration. It ultimately ended at 17-14 overall, with any (small) chance of making some noise in March canceled by the coronavirus outbreak.

Today, we take a walk down memory lane. Keep reading below for our team MVP, most improved, best freshman and best performances of the season.

Fulkerson received some late season pressure from Santiago Vescovi for this award. But after a full season’s worth of results, it has to be Fulkerson.

The junior from Kingsport took a leap that few could’ve predicted before the season started. Fulkerson had his moments as a rotational option in 2018-2019, but his lack of athleticism and seemingly limited skills made him seem destined for a constant bench role.

He proved all doubters wrong with a season earning him Second Team All-SEC honors. Fulkerson refined his game around the rim and turned into a constantly annoying presence in the post for opposing teams. He wore down defenders with a never-ending motor that allowed him to feast on put back opportunities and easy buckets. Add in some respectable defense and late-game heroics, and Fulkerson deserves all the credit for keeping this team in the conversation as long as he did.

Go back 365 days and imagine reading this. It’s a testament to Rick Barnes and his staff’s ability to develop talent. Fulkerson seemed lost for the better part of the 2018-19 season, but all of that changed this year. Fulky became borderline dominant down the stretch, reminding me of Grant Williams in some ways on the block, which is a big statement.

When Tennessee needed a bucket, they found No. 10. There were just four games in SEC play where Fulkerson wasn’t in double digits for the Volunteers. That offensive light bulb coming on is an outstanding sign for next season, as Tennessee returns its core along with the best recruiting class in program history. Fulkerson should enter the season as offensive option No. 1, regardless of what the incoming trio bring.

Stay with me here for a second. Yes, Fulkerson is the instinctual choice for Most Improved, having gone from a reliable rotational player to team MVP. But let me share fellow writer Terry Lambert’s analysis of Pons’ game after last season.

Once SEC play began, Pons vanished from the box score. Eventually he was replaced by Lamonte Turner in the starting five. Suddenly Pons was struggling to even find minutes. His development has been disappointing to this point. He oozes athleticism, but you just don’t see a ton refined skill yet. That’s something that’s going to have to change. Pons is set to be a key piece off the bench along with Jalen Johnson. Tennessee doesn’t need him to be a 15 point per game scorer, but they do need his defense and athletic ability on the floor off the bench.

Guess what? Terry was completely correct. In fact, he was a bit more generous than others would have been when evaluating Pons.

Now let’s look at what he did in the 2019-2020 season. Pons tripled his minutes, raised his scoring average to 10.8 points per game, became a factor in the rebounding effort, and was awarded the SEC Defensive Player of the Year award after putting together elite defensive outings throughout the season, bolstered by 2.4 blocks per game.

The improvement on offense and defense alone puts Pons in the conversation. What seals the deal for me is the fact that Pons reversed a downward trend and grew into the player we all hoped he would. His Tennessee career was heading fast towards the “Bust” label at the end of 2018-2019. No longer.

As much as Pons improved, the things John Fulkerson did this year were jaw-dropping. After flashing as a true freshman, a shoulder injury derailed Fulkerson’s development. Rick Barnes blamed that injury for a lot of Fulky’s struggles to start last season. It’s clear now how much it was holding him back.

Still, we’re talking about a guy who looked lost most of the time as a role player on last year’s team. Tennessee fell off quite a bit when they had to rely on him for some key minutes off the bench. For him to go from that to what he was this season was truly a shocking turn. We’re now talking about a guy with a potential future in the NBA.

You really can’t go wrong with Fulkerson or Pons here, but I think we all kind of knew what Pons’ ceiling was. Nobody saw this coming from Fulky, which is why I have to give him the nod.

Freshman of the Year

Didn’t join the team until late December? No problem! Santiago Vescovi’s strange path to starting Tennessee point guard was anything but conventional, and yet his presence on the team felt so natural. Even if Lamonte Turner had been healthy all year, there was still a question of how smooth the team would transition on the offensive side of the ball, since they didn’t have an elite facilitator or an overly reliable three-point threat.

Vescovi turned out to be the answer. He won the starting job very quickly thanks to his flashy style of play and mesmerizing court vision. The occasional spark from long range also made him a fan favorite.

That’s not to say he was perfect—notably, turnovers and fouls were a lingering issue that will need to be corrected for next season.

While the offense never reached their full potential, Vescovi showed every trait you want from your “Floor General” when it comes to running the offense. If he continues the development he started as a freshman, he will be the Team MVP by end of his sophomore year.

I don’t see any other route you can take here. Tennessee rode Lamonte Turner early in the year, watching the senior point guard put the team on his back for better or for worse. Turns out, that shoulder issue was pretty bad, which ended up ending his Tennessee career early.

With the status of Jordan Bowden’s ice cold shooting, Tennessee was lacking an aggressor. From the first minute Vescovi played, he was that guy for the Volunteers.

He was inserted into a tough situation, tasked with starting after just three practices. Vescovi responded with immediate sharpshooting, high-level passing — and growing pains. It wasn’t always pretty, but he served as Tennessee’s creator at a time where they simply didn’t have one. The upside here is obvious, and he’s only going to have more to work with next year.

Best Performance of the Year

This game was my first response after a quick jog through the memories of the 2019-2020 season. Upon rewatch, it is totally deserving of the distinction.

Fulkerson did whatever he wanted up in Lexington on March 3rd. The box score alone hints at the dominance—going for 27 points on 67% shooting, along with six rebounds and two assists, indicates a highly efficient outing on offense. It’s pretty accurate, since Fulkerson scored on virtually every player Kentucky put up against him. Whether it was a difficult mid-range shot, a drive and spin inside, or a turnaround jumper, Fulkerson nailed it.

Yet that’s not the full reason I’m choosing this game. The deciding factor were the plays where Fulkerson once again made his presence known without even putting the ball in the hoop. Plays like this one late in the second half, when he helped stretch Tennessee’s lead to six points with under two minutes remaining. Or this one where he does a pinpoint pass to find the open man for three points and the lead. It’s plays like these which made his season all the more impressive. Before, he had a bit of a reputation for playing recklessly. He changed the reputation by being one of the more fine-tuned players on this year’s squad.

I’m getting a little creative here, but this one really stood out in my head. At that point, we really didn’t know what this team was going to look like. All we really knew was that Jordan Bowden and Lamonte Turner had to be the guys for Tennessee to be successful. We now know that didn’t exactly happen, but that Murray State game had us all hoping Bowden had taken a big step forward.

Tennessee was down in the first half. The Racers were putting it on the Volunteers, and quite honestly, things felt bleak. An 11 point Murray State lead had us questioning everything, until Jordan Bowden showed up in the second half.

That was as confident as you ever saw Bowden in Knoxville. He poured in 26 points, most of which coming in the second half as Tennessee came roaring back. Bowden shot 6-8 from long range, pulling up with confidence and draining just about anything he wanted. It was the Jordan Bowden we were all left craving for the remainder of the year.

Though we didn’t get many more of these examples for Bowden, it was a good representation of what he was at Tennessee. An inconsistent, streaky scorer capable of completely putting the team on his back in spurts.