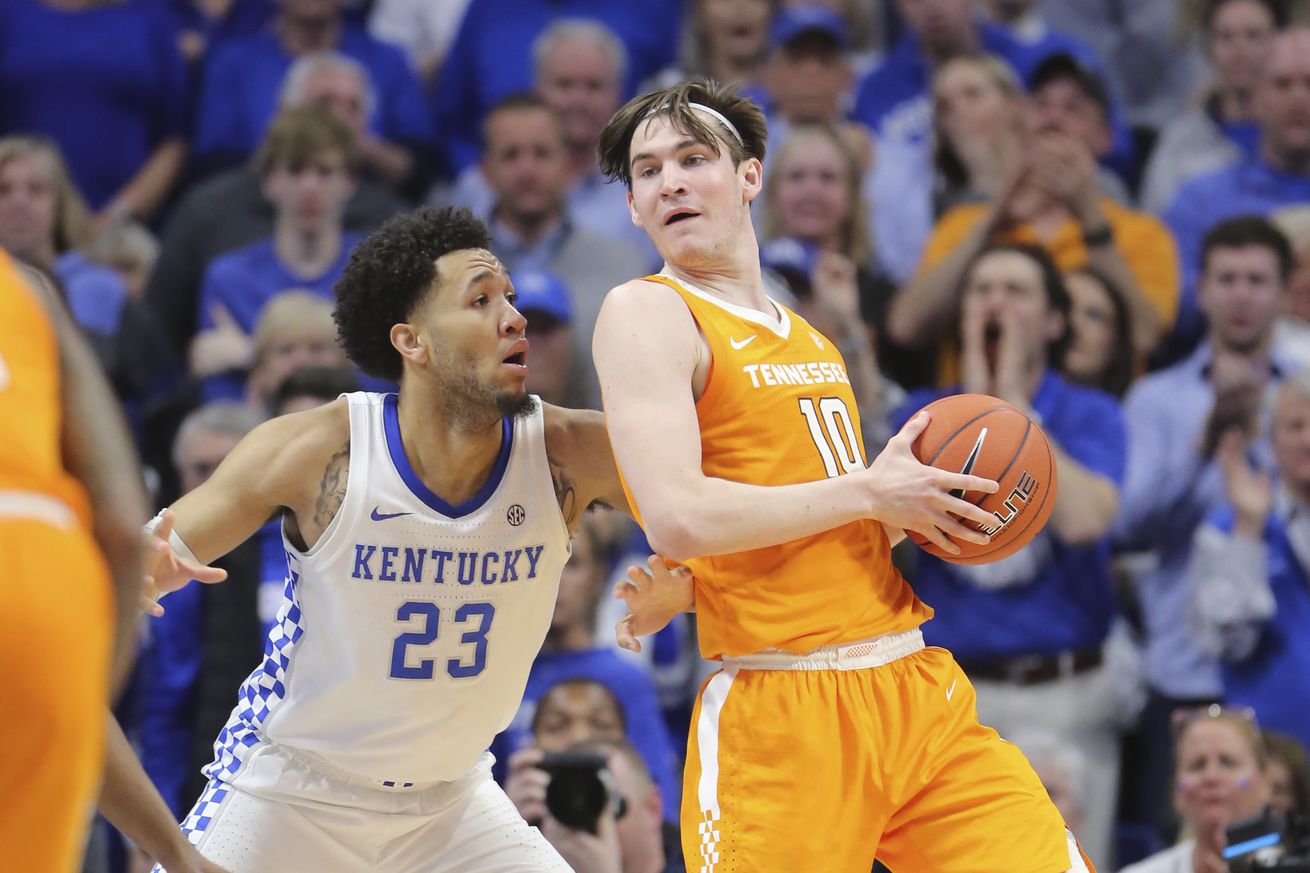 Here’s everything you need to know about the 2020-2021 Tennessee basketball team.

Just like that, basketball season is almost upon us. That’s good news for Tennessee fans, who witnessed the Volunteers rebound towards the end of last season and look prime to pull off an upset or two in the SEC tournament. Of course, that was before the coronavirus shut down the tournament (and the world, for that matter). It feels strange to even discuss last year’s squad, given what we know happened in March. It almost feels like a different timeline.

Tennessee went 17-14 overall last year and 9-9 in the SEC. That was a pretty large step back from their 31-6 mark in the prior season, even if they did lose multiple NBA draft picks. It also means they have a good amount of room for improvement.

If you’ve been under a rock for a few months—or if you simply need a refresher on what the basketball team brings for this season—here’s everything you need to know.

Bottom Line: The only real sting here is Bowden. He was a talented, albeit inconsistent, scoring threat. That meant a lot on a team who had very few options after Turner went down for the season. Fans were robbed of Turner’s final year after a surgery required him to miss most of the season. The only silver lining was that it forced Tennessee to discover their best starting five and give them all the opportunities they could handle. Johnson was also a decent role player, even if he wasn’t “irreplaceable” by any stretch.

G Victor Bailey – Transfer from Oregon. Had to sit out one year after transferring, available for this season. Averaged 7.4 points per game and 39% from 3-point range in the 2018-2019 season.

Bottom Line: Arguably the most talented incoming group of players in Tennessee history. Johnson and Springer were both elite grabs on the recruiting trail, and Walker is no slouch either. Anosike is a scoring machine and had a lot of top teams interested in him when he transferred. Bailey is a bit more of a wildcard. If he keeps improving his outside shooting, he could be a nice role player.

Bottom Line: A solid group of veterans with a lot to like defensively. Vescovi as the floor general is super promising, considering he took over the role without much time to practice. Jordan-James is a work in progress who can be a stud defender and elite offensive creator with more work. Pons is the returning SEC Defensive Player of the Year who came into his own as a scorer as well. Fulkerson is one of the best all-around post players in the league who out-hustles players with much more talent.

Bottom Line: A bit too many question marks to feel all that comfortable with this group. None of these players had “wow” moments last season, and all looked pretty raw whenever they stepped on the court. Plavsic in particular was disappointing, since he was a transfer and the staff hoped he could provide immediate help down low. If you had to bet money on who you’d see most this season, it’s probably Gaines and Nkamhoua. Gaines seems to be well-liked by the staff for his defensive effort and basketball IQ on offense. Nkamhoua is still a project, but his offensive skill set as a potential power forward is rare. His potential is through the roof.

How good can the incoming freshmen be?

Tennessee is going to be leaning heavily on their two 5-star freshmen to provide a spark to their offense. Right now the only proven offensive threats are Fulkerson and Vescovi. The former is a quality post presence, while the latter is a bit too streaky to rely on.

Enter Johnson and Springer—two guys known for their absolute dynamite offensive skillset. Both have the raw ability to become the leading scorer for the team right off the bat. Barnes recruited them with the goal of infusing the Tennessee offense with more scoring talent. Jordan-James is a quality guard but he simply doesn’t have the confidence yet. He also had major ups and downs last year.

It’s a bit scary to say that the season outlook hinges on both freshmen coming in and contributing immediately. If they’re a bit raw and unable to immediately capitalize—Tennessee could be in a dog fight for a tournament seed at the end of the season.

If they live up to the billing? Tennessee might be cutting down the nets after the SEC tournament and preparing for a top-4 seed in the Big Dance. Yes, there really is that much variance with this team right now.

How will the frontcourt shake out?

John Fulkerson is “the guy” in the front court. There’s no debate about that. His stunning improvement last season turned him into an All-SEC Second Team selection, and gave fans real excitement with Barnes’ ability to develop. Besides him, it’s still a huge question mark (we are viewing Pons as more of a hybrid option).

The assumption is that E.J. Anosike will be the first option. That’s probably a good assumption to make, since Anosike was one of the more highly sought after transfer players in the country. But one thing to consider is that Anosike-Fulkerson is a somewhat small frontcourt, and Anosike’s defense is not his strong suit. So there’s going to be plenty of rotation. It’s just a matter of who comes after him. Uros Plavsic was disappointing and did not look the part of a key contributor. Both Pember and Nkamhoua looked quite raw and not completely ready to take on a lot of minutes. Has that changed after the offseason? Or is Barnes comfortable with the duo of Anosike and Fulkerson? More intriguing, could Barnes simply roll with Pons and Fulkerson as the “big guys” on the floor, and try to figure out the best combo of guards in the backcourt? It’s a fascinating question.

How does COVID affect the upcoming season?

Theoretically, COVID-19 will be easier to contain on a team that is under 20 players, as opposed to one that is over 70. So in the event a game is cancelled or postponed, you can pretty easily shut things down and restart shortly afterwards. There’s some more flexibility with scheduling as well.

Conversely, the amount of travel usually required for college basketball will be interesting to deal with. The schedule released last week looks about what you’d think it would look like. I’m still a little surprised at some of the non-conference games, but most do seem to be limiting the aforementioned travel issues. Tennessee’s non-conference opponents are Charlotte, VCU, Cincinnati, Appalachian State, Tennessee Tech, and USC Upstate. They still have two more non-conference slots to fill.

Assuming they find two more teams, that’s 27 games total. Which is not far off from the 31 regular season matchups they would play in a regular season. So if you’re worried about the team not being given more time to “gel”, it looks like there will be a minimal drop off. It would still be a very small factor.

We’d be lying if we said we were confident in any of our assumptions, however. COVID-19 has already forced the SEC football teams to pursue some creative scheduling practices, and essentially neutered this weekend’s slate of games. It’s no secret that the country is in the midst of a second/third wave of the pandemic that looks even more widespread than the ones preceding it.

We simply don’t know how the season will play out, and we’re not even sure about the timing of it all. Just sit back and take it a week at a time.