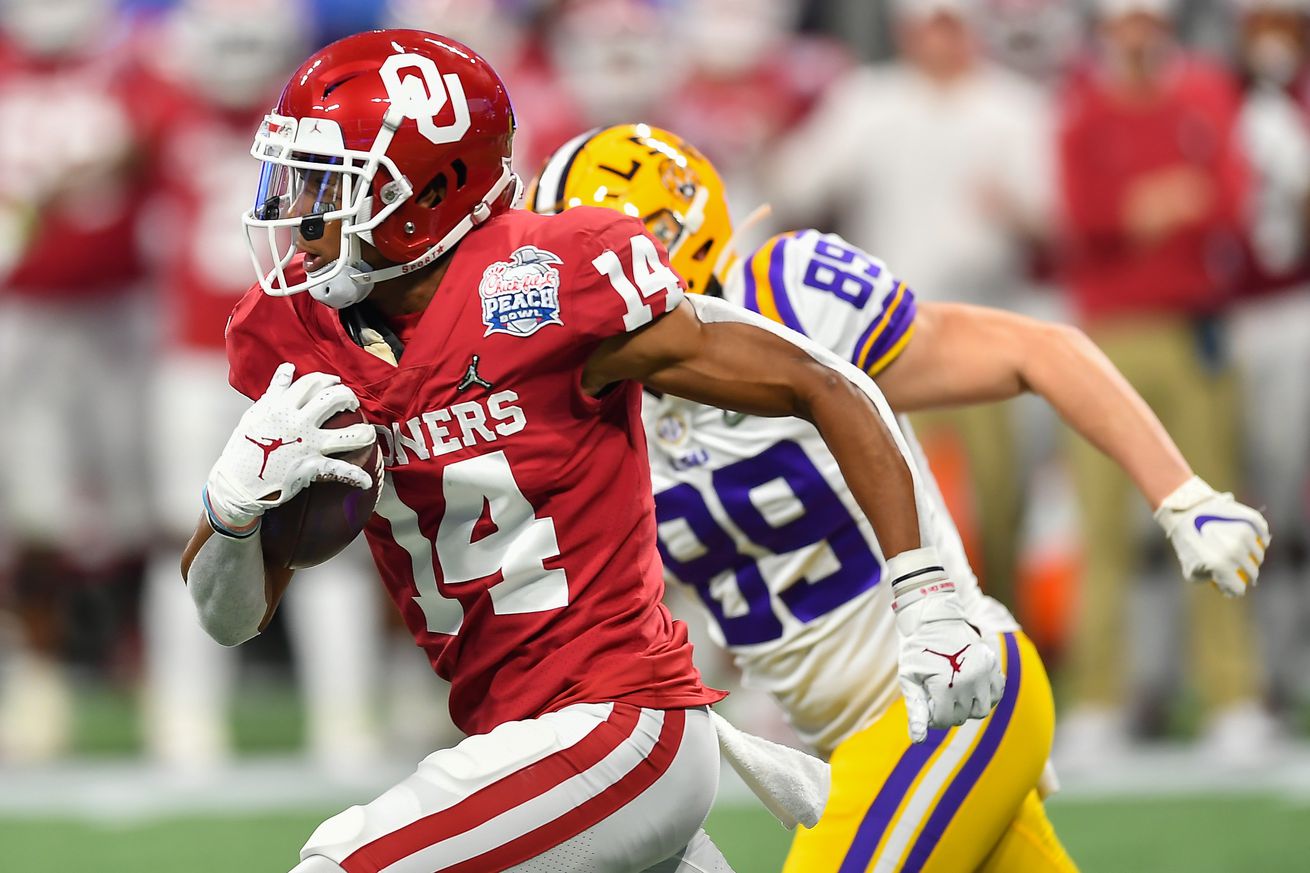 They’re young, but the upside is massive.

Without much news to digest these days, we’re digging in on one of this fall’s most intriguing non-conference matchups — Tennessee vs. Oklahoma. It’s going to serve as a bit of a measuring stick game for the Vols, who ripped off six straight wins to close 2019. Tennessee currently sits as a fringe top 25 team, looking to take an early step forward against a top ten team in Oklahoma ahead of SEC play.

The Sooners are still looking to get past the first round of the College Football Playoff, but they’ll have to do so with a new quarterback and several new faces at receiver. We highlighted quarterback Spencer Rattler in our last preview post, now it’s time to take a look at his receivers.

CeeDee Lamb has moved on to the NFL, keeping the steady stream of Oklahoma-to-NFL receiver talent moving. But don’t feel bad for the Sooners. They’ll replace Lamb with their ridiculous haul of receiver talent from the 2019 class, which includes three five-star receivers.

Still, experience will be an issue for this group.

“We were able to get glimpses of former five-star receivers Jadon Haselwood, Theo Wease and Trejan Bridges in 2019, but the depth chart and Jalen Hurts-catered offensive system kept them from truly breaking out as true freshmen,” Crimson and Cream Machine lead writer Jack Shields told Rocky Top Talk.

Haselwood led the way for that talented class of 2019 as a freshman, hauling in 19 catches for 272 yards and a score. You may remember that name, as Tennessee was involved down the stretch of his recruitment. He eventually chose the Sooners over Tennessee, Georgia and Miami.

“It’s readily apparent that the 6-2 Haselwood — an absolute monster both in the open field and in crowded situations — is going to be a sensation if he stays healthy,” Shields said. “In limited action, Wease showed that he is a major big-play threat. This was on full display in OU’s comeback win at Baylor, as Oklahoma needed him to step up in CeeDee Lamb’s absence. Bridges – who might miss the first five games with a suspension – also performed well when called upon.”

Lamb was the catalyst of the passing attack in 2019, putting up over 1,300 yards receiving in a bit of a different looking attack with Hurts leading the charge. Rising junior Charleston Rambo was second on the team behind Lamb, averaging over 17 yards per catch. He’s the logical choice to fill that game-breaking role that Lamb will leave behind.

“On the outside, OU still has speedster Charleston Rambo, whose skills weren’t fully employed in 2019 due to Hurts’ limited deep-ball proficiency. On the inside, tight end Austin Stogner is the total package. He’s a huge target who will be a handful for defenses in the red zone, but he’s also a much better blocker than predecessors Mark Andrews and Grant Calcaterra.”

With youth set to dominate the Oklahoma pass catchers this season, Lincoln Riley was able to add two grad-transfers as insurance for the 2020 season.

“Oklahoma also added a pair of grad transfers this offseason in UCLA’s Theo Howard and Marshall’s Obi Obialo, and each should play a role in this season’s offense, provided that Howard is healthy in time,” Shields noted.

Howard, a 6-foot senior, put up back to back 500+ yard seasons for UCLA before tranferring to Oklahoma. Obiala, a 6-3 senior, is coming off of a foot injury that limited him to just 19 catches at Marshall last season. But his upside was immediately put on display against Louisiana Tech as Obiala caught eight passes for 142 yards.

To summarize, the veteran Tennessee secondary will have their hands full with a talented, but inexperienced receiver group in Norman. There’s little doubt that they will figure things out as the season moves forward with a new quarterback and several new contributors at receiver, but Tennessee is fortunate to catch them during the second week of the season. Perhaps that will give the Vols a little advantage, even though the upside of this group is admittedly massive.