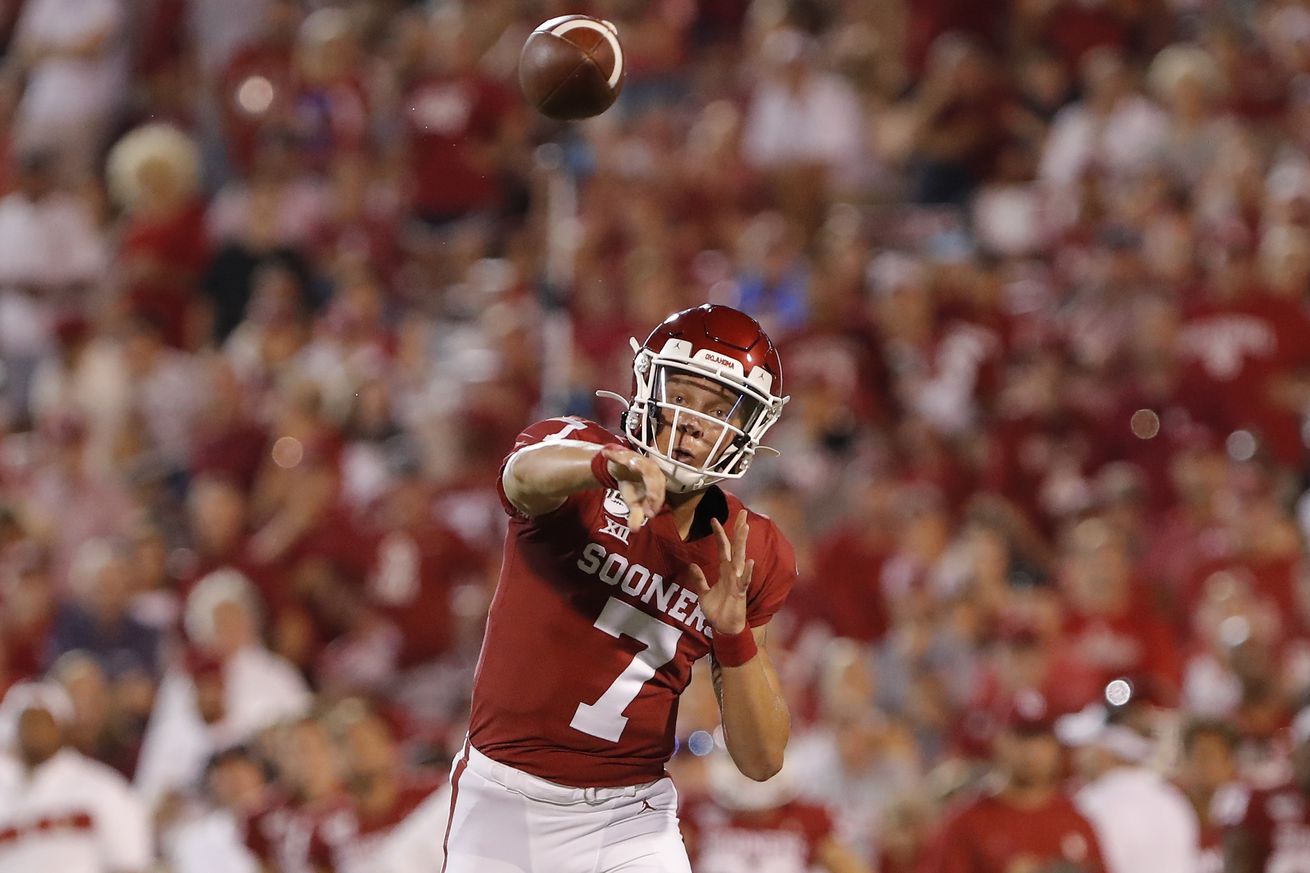 A brief breakdown of an Oklahoma staple.

I’m not sure how many times per game The Pride of the Southland Band plays ‘Rocky Top.’ I just know that it’s a lot. One article from The Advocate indicated that in 2016 our world-class band averaged 34 ‘Rocky Top’ plays per game. But, with just one article from three years ago to go on, it’s difficult to determine the accuracy of such an estimation. I think we can all agree that it’s one catchy tune that is universally adored across the country.

The crazy thing is that the above number pales in comparison to how many times Oklahoma’s band plays their fight song, ‘Boomer Sooner.’ According to this Dallas Morning News article — again from 2016. How bored were we in 2016 that we were keeping track of this? — Oklahoma’s band consistently belts out ‘Boomer Sooner’ more than 50 times per game. Occasionally, they even eclipse the 80 renditions per game mark.

In order to walk out of Norman, OK with a win on September 12th the Tennessee Volunteers are going to need to keep the number of ‘Boomer Sooner’s’ to a minimum. That will require keeping Lincoln Riley’s potent offense out of the end zone, which has proved to be a difficult task for teams not named Alabama or LSU in recent years. One of the key plays in the Sooner attack is Counter. We’re going to get into what this play is, and the many options that Oklahoma has off of it to be so successful.

In order to discuss Counter well it’s important that we start off with a clear definition of the play. There are many ways to define Counter, and my way isn’t ‘right’ while others are ‘wrong.’ For instance, some may argue that in order to be a true Counter the running back must fake in one direction, then cut in the opposite direction and receive the ball. I disagree. In my opinion Counter has just three essential elements that make up the play:

Again, there are many ways to discuss this play and no single way is more correct than another. For the purposes of this article, I believe working with the above definition will provide a strong foundation of understanding from which to build. For those of you visual learners below is a diagram of Counter from a 2 x 2 formation against a Nickel defense.

This diagram fits our definition from above. Here, the play side of the offensive line blocks down. The play side can also be described as the weak side, because although the offense is balanced in it’s 2 x 2 formation the play is moving into the boundary, and away from the running back’s initial alignment. The left guard is the leading puller and he is kicking out the edge defender. The left tackle above is the the second puller, and is assigned to the play side middle linebacker.

Interestingly, the strong side defensive end is left unblocked. That may seem strange at first, but it can be difficult for this defender to identify the play and chase down the running back. If this defender does start to anticipate Counter, and makes plays in the backfield, the offense has ways of dealing with him which we will touch on momentarily. For now, just recognize that at a basic level he will remain unblocked.

Below is an example of Oklahoma running Counter from a 2 x 2 formation against a Nickel defense, exactly how you saw it drawn in the diagram above.

Now, this play goes for a gain of almost five yards. The shocking part, though, is that it actually wasn’t blocked very well. Rewatch, and pay attention the the pulling guard and tackle. The guard does an excellent job of taking on the edge defender and kicking him out. However, the right tackle incorrectly pulls around the kick out block. There are occasions when this path — known commonly as ‘logging’ — might be called for, but certainly not in this case. The tackle should have gone underneath the kick out and blocked the play side middle linebacker. By not doing that, the play side middle linebacker was left unblocked. He doesn’t make the tackle in this case, but he does make the play by forcing the running back to cut back into pursuit.

Next, we’ll get slightly more complicated by looking at this play from a 3 x 1 formation.

I included the above example for a couple of reasons. For one, Oklahoma frequently uses 3 x 1 formations, and this will change a defense’s alignment compared to a balanced 2 x 2 set. Secondly, I wanted to draw your attention to the H-Back’s alignment. In the above example he fills for the pulling tackle, which causes this play to look similar to the one shown in Clip #1. Oftentimes, the Sooners will ask the H-Back will pull instead of the tackle. This makes the H-Back — an athlete typically more agile than a lineman — the ‘wrapper’ who is assigned to block the play side middle linebacker. Recognize when the H-Back is aligned on the same side of the formation as the running back as it is a strong indicator that Counter may be coming.

Clip #2 is a slightly better example of Counter because it was correctly blocked. The running back cuts it back when faced with penetration, but because the center and H-Back successfully cut off pursuit he is able to make his way into the end zone.

So if these examples were very basic looks at Counter, what’s the next step in complexity?

To make Counter more dangerous Oklahoma will add motion. An offense can use motion for a number of different reasons. Two such reasons are to create deception, and force a defense to adjust their alignment, both of which are on display in our next example.

The green arrows on the above figure indicate the pre-snap motion and resultant defensive movement. From 20-personnel Oklahoma sends one of their running backs out of the backfield toward the perimeter. The movement alone can cause a defender’s eyes to travel with the motion, and away from the key they are supposed to be reading.

If Georgia were to remain static against this motion they would be vulnerable to the bubble screen on the perimeter. Their safety would be caught one on one against a running back in space. To improve their leverage Georgia slides their linebackers toward the motion. This puts four defenders over the now three receivers on the perimeter.

Unfortunately for the defense, by sliding in the direction of the motion they actually improved the blocking angles for the offensive line. Above you can see a good push from the down blocks, a great kick out of the edge defender, and the correct pull of the tackle up to the play side middle linebacker. The running back has a ton of room, and rips off a huge gain.

Part of Georgia’s adjustment above was to sneak the nickel safety down toward the box. The nickel defender essentially becomes the strong side edge defender, which if you remember is a player who remains unblocked on Counter. The nickel is in conflict here because he needs to be mindful of the quarterback keeping the ball, and he needs to rally late to the flat if the bubble is thrown.

What happens when strong side unblocked edge defender that we have mentioned starts to crash down and tackle the running back in the backfield? That’s when the Sooners will add a read to the play and let their athletic quarterback go to work.

It’s not a great run, as Kyler Murray runs into the back of his blocker, but it’s positive yards on first down nonetheless. And, it could have gone for much more. The motion used here is a nice touch as it adds a lead blocker on the edge for the quarterback.

Spencer Rattler, the #1 ranked quarterback in the 2019 recruiting class, is projected to be Oklahoma’s starter for the 2020 season. Listed at six feet tall, and less than 200-pounds, he compares more in stature to Baker Mayfield and Kyler Murray and less to Jalen Hurts. My suspicion is that in 2020 the Sooners will use their quarterback in the running game more on the perimeter — like the Murray example above, or Mayfield example below — in an attempt to protect Rattler.

Counter In The Passing Game

Finally, Counter becomes especially difficult to defend when Oklahoma starts to add it to their passing game. They can do this in two ways. The first is by using it as a run-pass option (RPO).

Here again, the strong side edge defender is left unblocked as we have seen now multiple times. But, the running back’s flare route holds him outside rather than crashing down. This time the ‘read-key’ is actually the strong side middle linebacker. He flies out to the perimeter to defender the flare route. This leaves five blockers against four defenders in the box. Therefore, Mayfield tucks the ball and runs the Counter path with a numbers advantage.

Had the linebacker stayed in the box Mayfield would have thrown the flare, where the Sooners had the perimeter blocked up.

Counter can also be used in the passing game with hard play-action. By now you understand the structure of the play, so I don’t need to draw it out for you. Just watch what the hard play-action with Counter blocking does to the defense.

Almost every defender bites on the Counter action. This allows the X-receiver to attack the free safety, then break open to the corner where he is wide open for a touchdown.

There you have it, one of Oklahoma’s most devastating offensive plays. I’ll get to work on showing you how Tennessee might stop all of this in another post. For now, stay healthy and be kind to one another!

Quick Note: Before I get any e-mails from my readers who are Pride of the Southland members or alumni, I know that ‘Down the Field’ is technically our official fight song while ‘Rocky Top’ is unofficial. I love y’all, thanks for what you do!