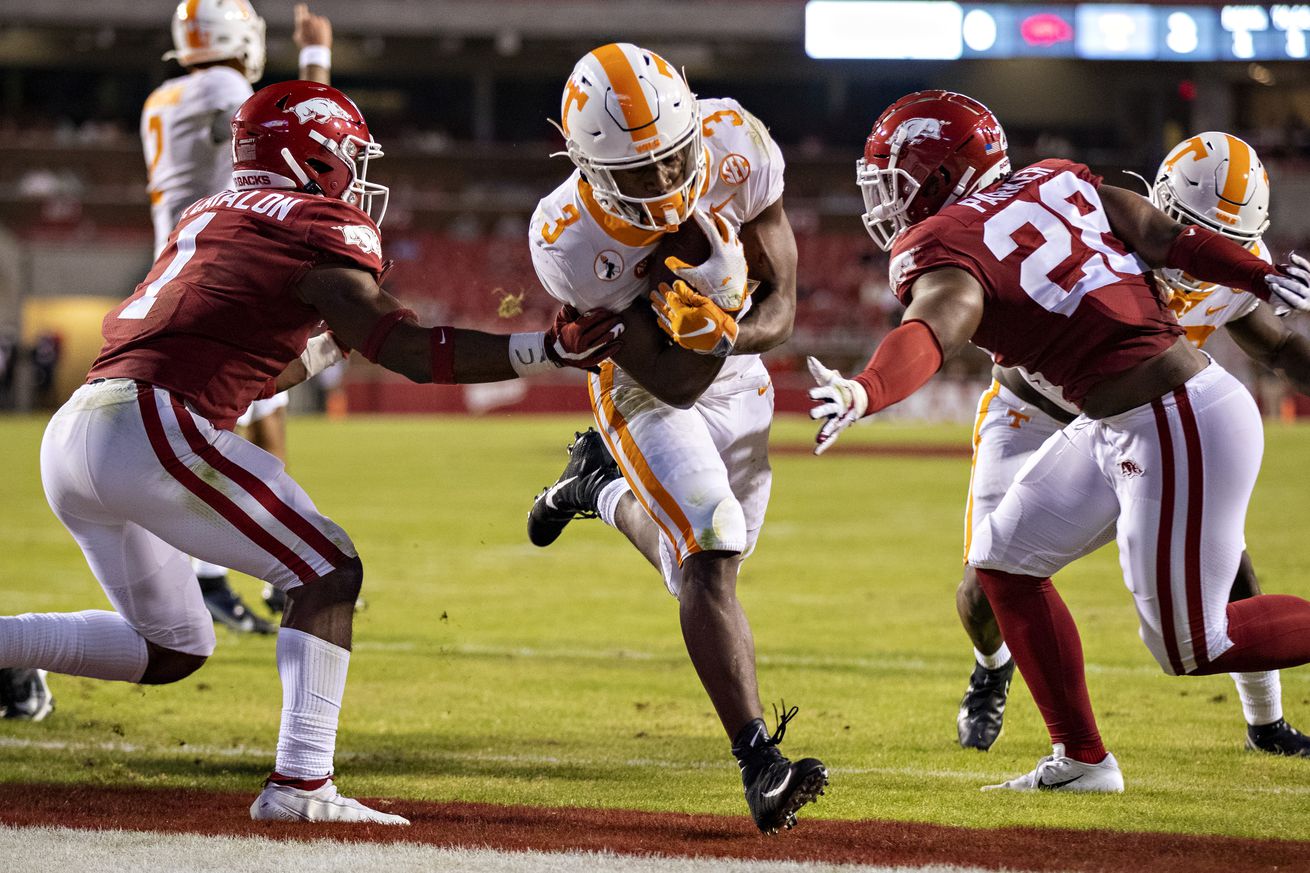 Yea. It was that bad.

The Tennessee Volunteers (2-4) entered Saturday night’s matchup with the Arkansas Razorbacks (3-3) with the hopes of getting the 2020 season back on track.

Well, that didn’t happen. A dismal second half led the Vols to their fourth loss on the season and boy, it was pretty ugly. Three second half touchdowns propelled Arkansas to the win and sent Tennessee packing with a ton of questions regarding the program’s future.

Tennessee was able to drive into scoring range rather quickly on the first drive of the game, but Jim Cheney decided to call a questionable wide receiver screen on 3rd and 13, which killed the drive and set up a 50-yard field goal attempt for Brent Cimaglia. The senior kicker drilled the attempt and gave Tennessee a 3-0 lead early in the first quarter.

Arkansas moved the ball a bit on their first drive of the game, but eventually punted the ball away. The Vols responded with a 16-play, 81-yard drive that ended in an Eric Gray touchdown. Gray rushed nine times for 33 yards and a score, while Jarrett Guarantano added 29 yards on two carries himself. Cimgalia hit the PAT and the Vols led, 10-0, with 13:35 left in the first half.

Eric Gray walks in for the touchdown.

Feleipe Franks helped construct a 13-play drive for the Razorbacks that was highlighted by a Blake Kern 24-yard reception, but the offense stalled out inside the UT5. To make matters worse, A.J. Reed missed his 21-yard field goal attempt and the Razorbacks still trailed, 10-0, in the first half.

Neither team could get anything done on the next couple of drives, but the Vols were able to extend their lead to 13-0 with 1:57 left in the first half thanks to a big holding penalty on Razorback corner Hudson Clark and a big 18-yard completion from Guarantano to Josh Palmer. The Vols’ drive stalled out at the ARK31, but Cimaglia hit the 48-yard field goal attempt to extend Tennessee’s lead.

Tennessee closed out the first half with 177 total yards compared to Arkansas’ 153. Both teams eclipsed 100 rushing yards in the first half and Arkansas averaged 5.3 yards per play compared to Tennessee’s 4.7 yards per play. The key was time of possession, however, as the Vols had the ball for nearly 20 minutes while the Hogs had the ball for a little over 10 minutes.

It didn’t take Arkansas long to find the end zone in the second half. In fact, the Hogs put together a 17-play, 75-yard touchdown drive on the first possession out of halftime. Hudson Henry, Trelon Smith, and Treylon Burks were all major players and each contributed plays of their own that resulted in Mike Woods’ one-yard reception to bring the Razorbacks back, 13-7, with 9:46 to go in the third quarter.

Wild hog won’t do it but Mike Woods will. Touchdown Arkansas.

Tennessee went three-and-out on its next drive and Arkansas —mainly Franks and Woods— broke it open on the next possession. Franks found Wood down the sideline for a 56-yard catch-and-run that took the ball down to the UT6. Franks found Kern on the very next play for a touchdown. Reed hit the PAT to give the Razorbacks a 14-13 lead with 6:35 left in the third quarter.

We are emotionally obligated to post the first touchdown catch of Blake Kern’s career. pic.twitter.com/g9czAVUT1k

The Vols were feeling the pressure as Brian Maurer came in to replace Guarantano on the next possession. It didn’t do anything, however, as the Vols went three-and-out and immediately punted the ball back to Arkansas.

It literally took two plays before the Hogs found the end zone. Franks hit Burks on a beautiful 59-yard touchdown pass to put Arkansas up, 21-13, with 4:13 left in the third quarter.

The Vols needed a spark. And fast. Or else this game would be over, quick.

As it turned out, Tennessee went three-and-out, again. Arkansas was able to follow up with a field goal on the next drive to push the lead to 24-13.

All of a sudden, the Vols entered the fourth quarter down two scores. Would Tennessee be able to pull off the comeback?

Neither team could get anything done over the next few possessions, but Tennessee’s defense started to come to life with four sacks in six plays against the Arkansas offense. The end result was a Tennessee drive starting at the ARK48 with 7:07 left in the game.

Freshman quarterback Harrison Bailey came in, marking the third quarterback the Vols would use in this game. It didn’t lead to much, though, as the Vols faced a 4th and 4 from the ARK24.

He couldn’t get it done as the Hogs knocked the ball in the air and picked it off. But what made the situation all the more confusing was the fact that Tennessee declined to kick the field goal in order to make it a 24-16 game, instead of keeping it at a 24-13 game.

It would be a decision that helped put the final nail in the Vols’ coffin as they would go on to lose, 24-13, and drop to 2-4 on the season.

Tennessee will host the No. 7 Texas A&M Aggies in Neyland Stadium on November 14. Kickoff is currently set for 3:30PM EST.

You can check out the final score and stats here.