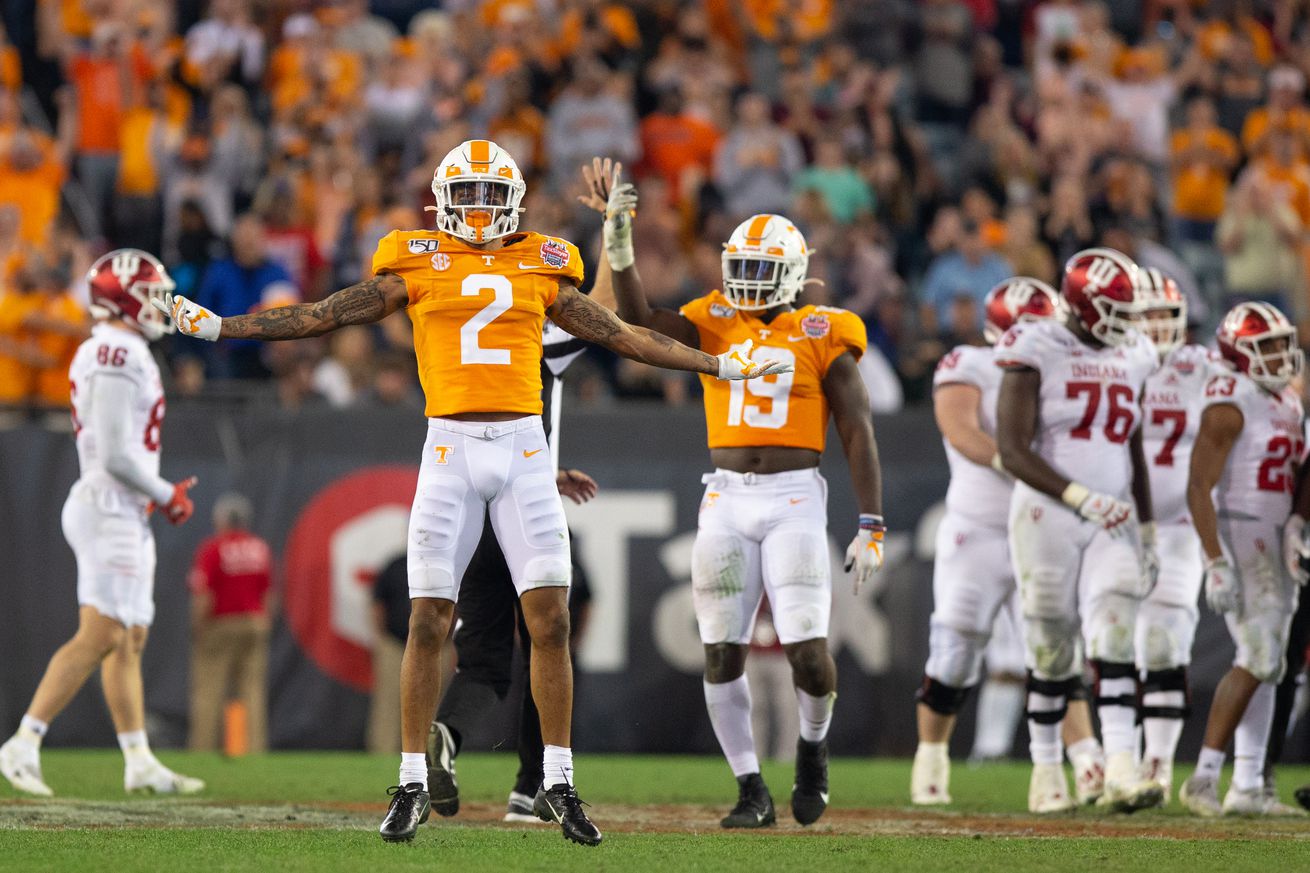 As part of our series previewing all the position groups, we break down every aspect of the team and give you an idea of what Tennessee football will be working with in 2020. So far, we’ve covered four groups in total. Those links are listed below for your interest.

On tap for today is cornerback. A position where Jeremy Pruitt has a reputation for sending players to the league and watching them succeed. After just one year on the job, he was able to bring Tennessee two starting true freshman cornerbacks who will likely add to that pedigree. In the years following, Tennessee’s results at the position—both recruiting and in-game action—are a bit mixed. There are plenty of signs for optimism, however. Along with one big worrying factor.

Fair warning, this section is sort of unclear when it comes to assessing just how important some players are. Tennessee likes to throw a lot of different looks in the secondary and rotate between players for various roles. What we’re pin pointing here is the players most likely to start at the three main cornerback roles: Field corner, boundary corner, and STAR.

The obvious standout is junior Bryce Thompson, whose absence at the beginning of the season was painfully evident. Thompson brings more than just great coverage ability—he’s relentless as a tackler and does an essential job containing plays on the outside. The defense’s turnaround would not have been possible without his continuously impressive outings.

Alontae Taylor is the more complicated of the two. In the first half of the season, he was arguably the team’s biggest disappointment. Even if you ignore the abhorrently bad play against BYU that basically allowed them to win the game, Taylor’s first four games saw him regress in both coverage and helping against the run. It was bad enough that he had to ride the bench for a short time while Pruitt figured out how to instill confidence.

The good news is he found that confidence. While he wasn’t as versatile as 2018, Taylor returned to being a lockdown corner in the back half of 2019. You could tell he was more comfortable in his role on defense and greatly benefitted from Thompson returning on the opposite side.

The lesser known surprise of the season was Shawn Shamburger at the STAR corner position (essentially a hybrid of a linebacker and a corner). The staff felt comfortable enough with Shamburger to start him in 12 games in place of the injured Baylen Buchanan. He responded with arguably the second or third best year of players in the 2019 secondary. Shamburger will be a valuable asset and has likely taken over Buchanan’s spot for 2020.

Truthfully I don’t have reliable numbers on how many snaps each rotational cornerback played in which positions. So I’ll just address them as one group.

Admittedly this is a pretty thin group. Hence why I named it Tennessee’s top need on the 2021 recruiting trail.

Even more worrying is the fact that Buchanan is by no means guaranteed to be cleared by doctors for the 2020 season. He missed all of 2019 due to spinal narrowing. That type of medical condition is obviously very risky and could easily rule him out.

Of all the players listed above, I think the staff is most interested in building up Burrell. The sophomore was thrown into the fire last season in light of Buchanan’s injury and Thompson’s suspension, forced to start the first four games as a true freshman. He struggled mightily to keep up with a lot of receivers, and it was only the Florida game where he really started showing the traits which made a lot of high profile programs chase after him as a recruit. The staff still fully believes in his potential and wants to build on his results in the back stretch of the season.

That’s not to say you won’t see George Jr. or Solomon much. By the virtue of thin numbers, both will have plenty of opportunities. George Jr. had a quietly decent 2019, though he may have reached his ceiling.

We’re throwing Fields in here because there is still the possibility he contributes in one of the cornerback slots. The staff regards him more as a safety, but they also valued his versatility when coming out of high school. He didn’t play much in 2019 and thus received a redshirt.

This is a bit of a weird situation, because Lawrence is typically regarded as a safety, and his ceiling is highest there. But Lawrence will indeed start his career at Tennessee as a cornerback. That’s not a giant red flag—Lawrence is very talented and has the ability to be a good corner—but Lawrence is much more natural at safety.

It does make you question the staff’s recruiting results at the position itself…and there’s a lot of good reasons to do so. Despite an already thin depth chart at corner, Tennessee failed to sign a true cornerback in the 2020 class. That puts their total of true cornerbacks in the past two classes at just three signees. That’s way below average and has led to an issue where they will need to sign at least four in the 2021 class.

The real effect won’t be felt in the 2020 season however. In fact, it’s fair to call the 2020 cornerback group a strength. They’ve got a core of veteran players that are all proven. While the depth leaves something to be desired, the position group should allow Pruitt and Derrick Ansley to be more flexible with some of their defensive calls.

Instead, it will be felt in 2021 after three players graduate: Baylen Buchanan, Kenneth George Jr., and Shawn Shamburger. There’s also a decent chance that one of Alontae Taylor or Bryce Thompson leave early. Even if Tennessee signs a good number of cornerbacks, their depth chart for next year will have a lot of (Fr.) on it.