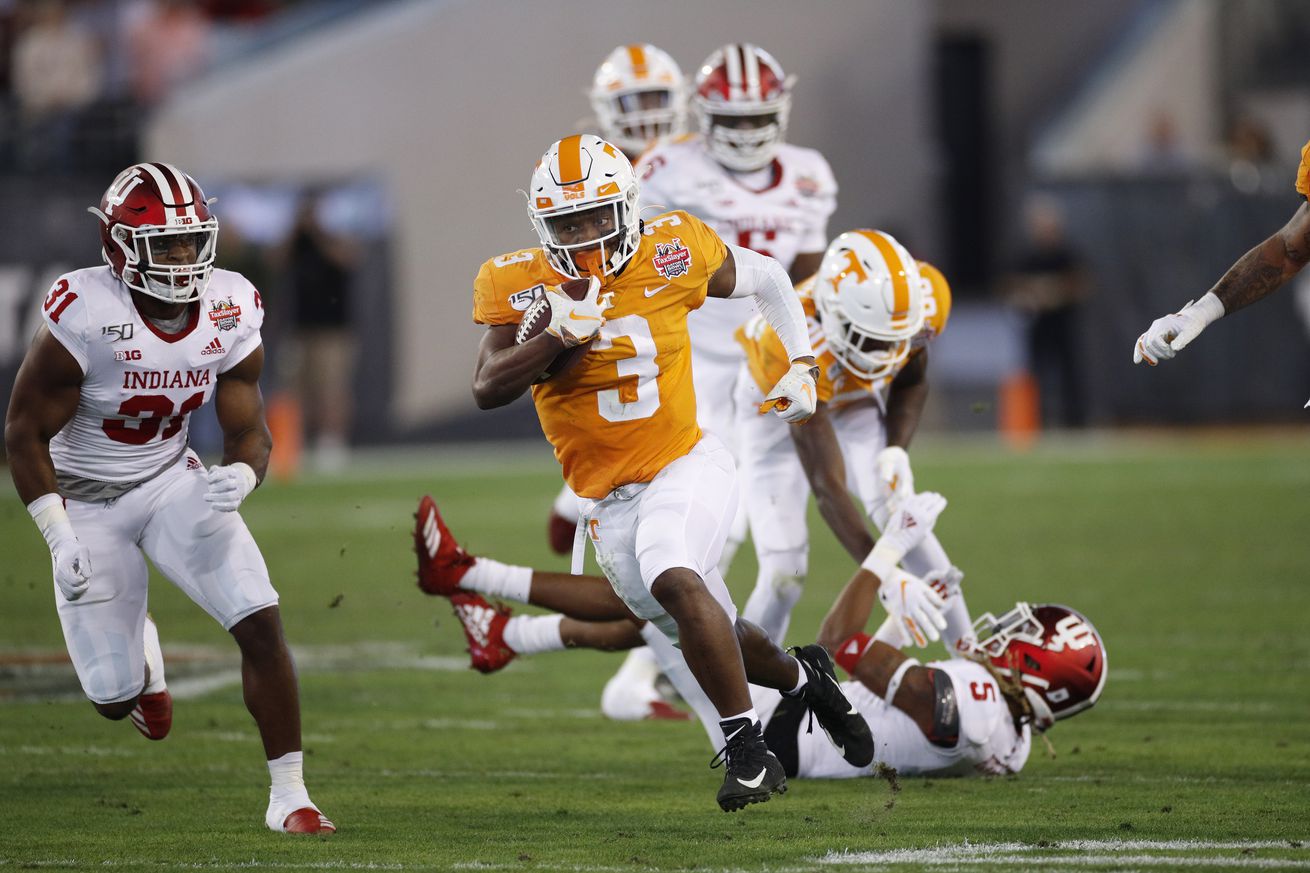 As part of our series previewing all the position groups, we break down every aspect of the team and give you an idea of what Tennessee football will be working with in 2020. So far, we’ve covered six groups in total. Those links are listed below for your interest.

We’re near the end of the series at this point, with just running backs and tight ends remaining. Today, it’s the absolutely loaded running back room that we turn our attention to. This group has everything, from talent, to experience, to versatility, and everything in between. The only question is which players take redshirts because of how much depth there is in front of them.

Most everyone expected Gray to get at least some action in 2020. Despite having two experienced backs in front of him, Gray’s high school production and strong senior year showcased a player with a unique skillset.

What we didn’t expect was Gray to have one of the best single game performances in school history and a clear lane to the starting spot for 2021.

Truthfully, being a starter here means you’ll just receive a plurality of the carries rather than a majority, since the two other backs are still on campus. It’s still notable that a true freshman like Gray was able to gain the confidence of the staff enough to become the primary option. Though, when you watch his burst on the field and his confidence when hitting the lane, it becomes a bit more clear.

Chandler had an odd year, considering the expectations set for him. Chandler was expected to be the dual threat of the backfield, hurting teams both on the ground and through the air with his receiving abilities. Instead, he got lost in the shuffle after the first few games and had an up-and-down year. The dual threat promise never arrived, and thus Chandler didn’t live up to expectations. Honestly I’m a bit surprised he’s still at Tennessee—but a healthy Chandler still brings an explosive style that could greatly benefit the offense.

On the other end of the spectrum, Tim Jordan still enjoys a nice role as the change-of-pace bruising back. He doesn’t fully fit the role (as evidenced by Quavaris Crouch getting goal line duties) but he still showed his talent in games like Mississippi State and Alabama. He’s also a lot more willing and capable of blocking in certain situations. That’s going to be key for next year while the quarterback situation gets sorted out, so Jordan might be on field for more snaps than he was the past two seasons.

Fils-Aime took a redshirt last year in hopes of contributing more in 2020. It’s unclear how many reps he’ll get, if any at the running back position.

Tennessee’s running back haul in the 2020 class is a big one, and more interestingly it seems they went after players with very distinct skill sets—rather than someone like Gray or Chandler, who are all-around type of backs.

First is Jabari Small out of Memphis. He excels as a receiving back and potentially a slot receiver. He doesn’t have the size to be an every down back, but he can more or less be what someone like Chandler was supposed to be as a receiving threat. Small will likely take a redshirt.

On the other end of the spectrum is Tee Hodge. A fellow in-state prospect, Hodge enrolls at Tennessee at 6-foot-2 and 230 pounds, which should indicate what type of running back he projects best as. The staff is hoping Hodge can stay healthy and turn into the “power” back who pairs nicely with their other weapons. He will likely redshirt this year. Note that Hodge does have a very high ceiling and could end up being the best back in the class years down the road.

Finally there is the case of 4-star signee Len’Neth Whitehead. We have gone on record saying we think he projects best at linebacker. We still believe that, but Whitehead is confident that he will start his career at running back. He certainly has some strengths which could translate well to the position—his tape is full of him breaking tackles and staying upright no matter what hits him. If the staff is adamant at needing a power back, Whitehead seems like the best choice. That alone means he might not take a redshirt.