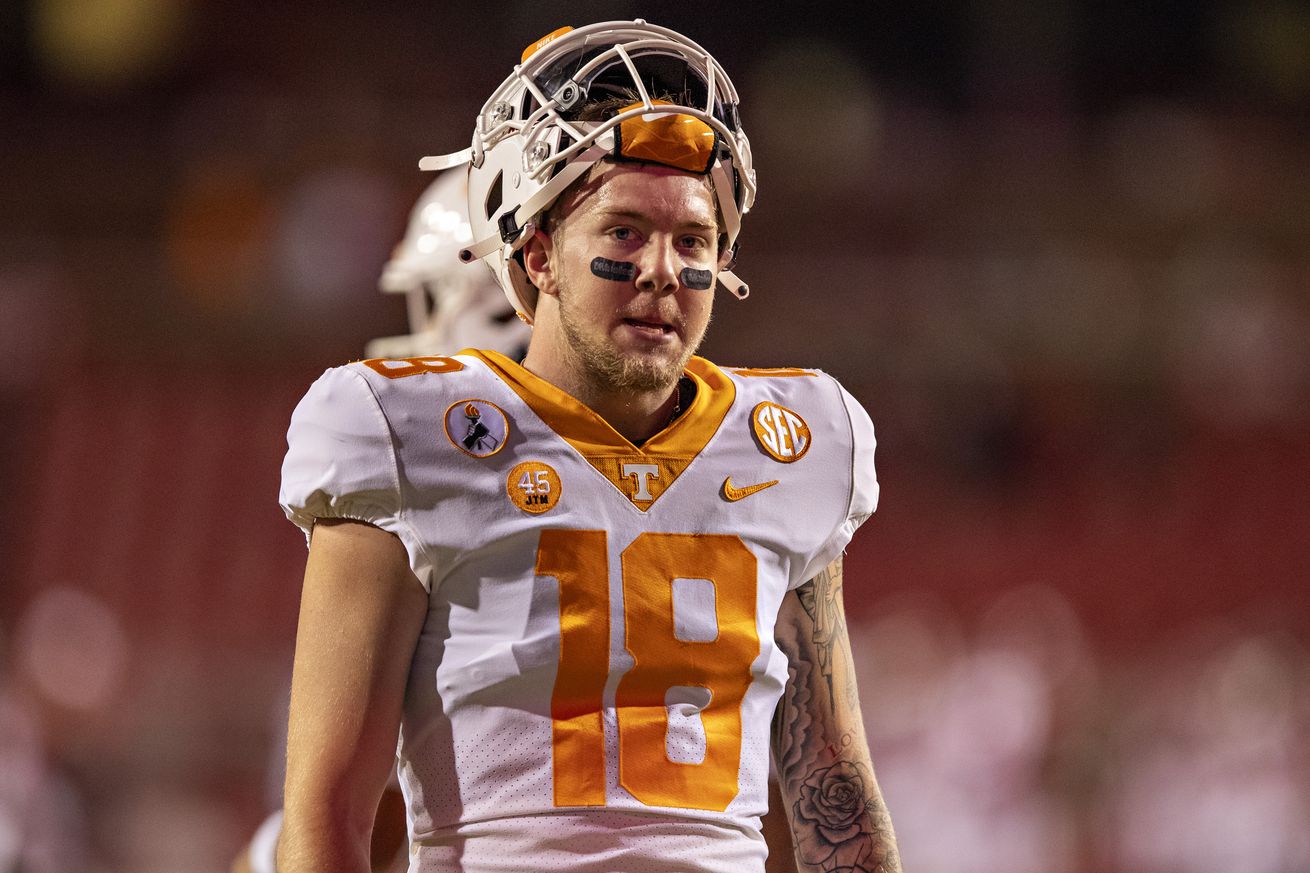 Somewhere, probably in Knoxville, somebody went to bed Saturday night and had a recurring dream: an inside handoff. On Saturday night, the Tennessee Volunteers (2-4) were in Fayetteville to take on the Arkansas Razorbacks (3-3) for the first time since 2015.

Both teams came into the game with identical records but were perhaps trending in opposite directions. From the Vols’ perspective, it was a no-win proposition, as I wrote last week. After three consecutive losses by wide point margins, including a home game to Kentucky, Tennessee desperately needed a win. For fans, Saturday’s match wasn’t about winning – it was about not losing. Good teams try to win. Bad teams try not to lose.

From Arkansas’ perspective, they were headed in the right direction. After a narrow defeat against Auburn and a fairly close loss to Texas A&M, it was a bit surprising odds makers gave the nod to Tennessee this weekend.

It was another week of Jarrett Guarantano behind center for the struggling Vols, trying to avoid a loss in a fourth consecutive game. Despite past issues, Guarantano wasn’t really part of the problem Saturday night. While he didn’t put up star numbers, Guarantano served largely as game manager through the first half before being taken out of the game due to a head injury in the third quarter. He was 5-of-8 with 42 yards, but didn’t throw a pick – his Achilles heel – as Eric Gray did most of the work for an offense that never seemed quite able to get rolling. But it was evident that Guarantano wasn’t going to hit the big play Saturday, like I outlined would need to be done in order to win in Fayetteville.

Pruitt would go on to say that he’s “not disappointed,” he’s “pissed.” That’s a sentiment he can share with the fan base. Now we’re left asking, where’s the line drawn? Before the game ended, fans had taken to Twitter to rail against Pruitt and a seemingly inept Tennessee team. Some continued their assault on Guarantano, others said Pruitt was to blame, while other singled out offensive coordinator Jim Chaney. The truth likely lies somewhere more in the aggregate.

For starters, many might not like it – and some might even disagree – at this point, Guarantano may well still give the Vols the best shot to win, as Pruitt keeps suggesting. The problem is: the defense knows what’s coming. According to CBS Sports, Tennessee ran 41 designed run plays (50, if you include quarterback scrambles) to 21 pass plays, many of which came in the final minute, down 11. Once Brian Maurer entered the game, Arkansas began selling out for the run, and made Maurer’s life miserable. He was uncomfortable during his entire appearance, eventually going 0-for-4 passing before being pulled for Harrison Bailey.

The coaching woes continued once Bailey entered the game, with the team opting to go run after run after run. The first time true freshman Bailey finally threw a pass was on that 4th-and-4 down when the field goal unit should’ve been on the field. That pass bounced off a pad and was subsequently intercepted. By the time Tennessee got the ball back, the game was virtually in hand for Arkansas. This is when the majority of the Vols’ pass attempts came to be, but they weren’t done with much urgency. Down 11, fans found themselves watching checkdown after checkdown. If it wasn’t evident the game was over before that drive, it didn’t take much to know with certainty that the Vols were about to lose their fourth consecutive game.

On why Pruitt decided not to kick a field goal in the fourth quarter that would’ve brought the Vols within a score, the head coach said, “It wasn’t close enough, I didn’t feel like, so we felt like we had a good play there and just didn’t get it done.,” according to GoVols247. He made that claim despite kicker Brent Cimaglia nailing two kicks from longer distance earlier.

Those types of statements will only further alienate a frustrated fanbase from its coach. To make a remark such as Pruitt’s on Saturday night is to insult the intelligence of the fan. In reality, it was a poor decision from the sideline – a trend common not only against Arkansas, but increasingly so as the weeks tick by.

As for the dreadful third quarter in which Tennessee was outscored 24-0 in an absolute onslaught of a period, it echoed problems the Volunteers have had all season. According to The Athletic’s Tennessee writer, David Ubben, “in its past four games, Tennessee has scored seven second-half points. In those four games, Tennessee has surrendered 88 second-half points.” To fans, this signals the obvious point that opposing teams are making halftime adjustments to win games, while the Volunteers ostensibly squander their break at the half on who knows what?

As for Pruitt, his once admirable humility has become a similar refrain in the shadow of a colossal loss. He said, “The execution part is not where it’s at. That’s my fault, not the players. It’s my fault. We’ve gotta work hard to get ‘em there.” After a rogue loss in a game you’re supposed to win, it’s nice to hear the coach utter words of responsibility, but when the road the Vols are consistently on seems to include losing games against teams which they’re supposed to beat, it’s nothing more than frustrating. It’s reasonable for fans to question the competence of the coach and his staff, especially in conjunction with all the other coaching miscues and management issues.

Tennessee now has no choice but to turn its attention to the Texas A&M Aggies next week, a 5-1 team coming off a blowout win over South Carolina, 48-3. This is the same Aggies team that already knocked off the Florida Gators – who just beat Georgia – and whose only loss came to Alabama.

Texas A&M knocked off Arkansas on Halloween, 42-31, and the transitive property suggests that A&M should therefore beat the Volunteers by three scores. But because of human – and athlete – inconsistencies, who knows with certainty how close – or out of reach – Saturday’s game will be. With the way Tennessee’s been playing, a three touchdown loss seems well within the realm of possibility. In fact, it might be underselling it.

A common joke around Vol Twitter over the last month is how Tennessee is no longer a football school, it’s a basketball school. At this point, I’m not sure it’s a joke. But Tennessee fans are nothing if not resilient. Come Saturday, we’ll be back in front of our television screens for another game.