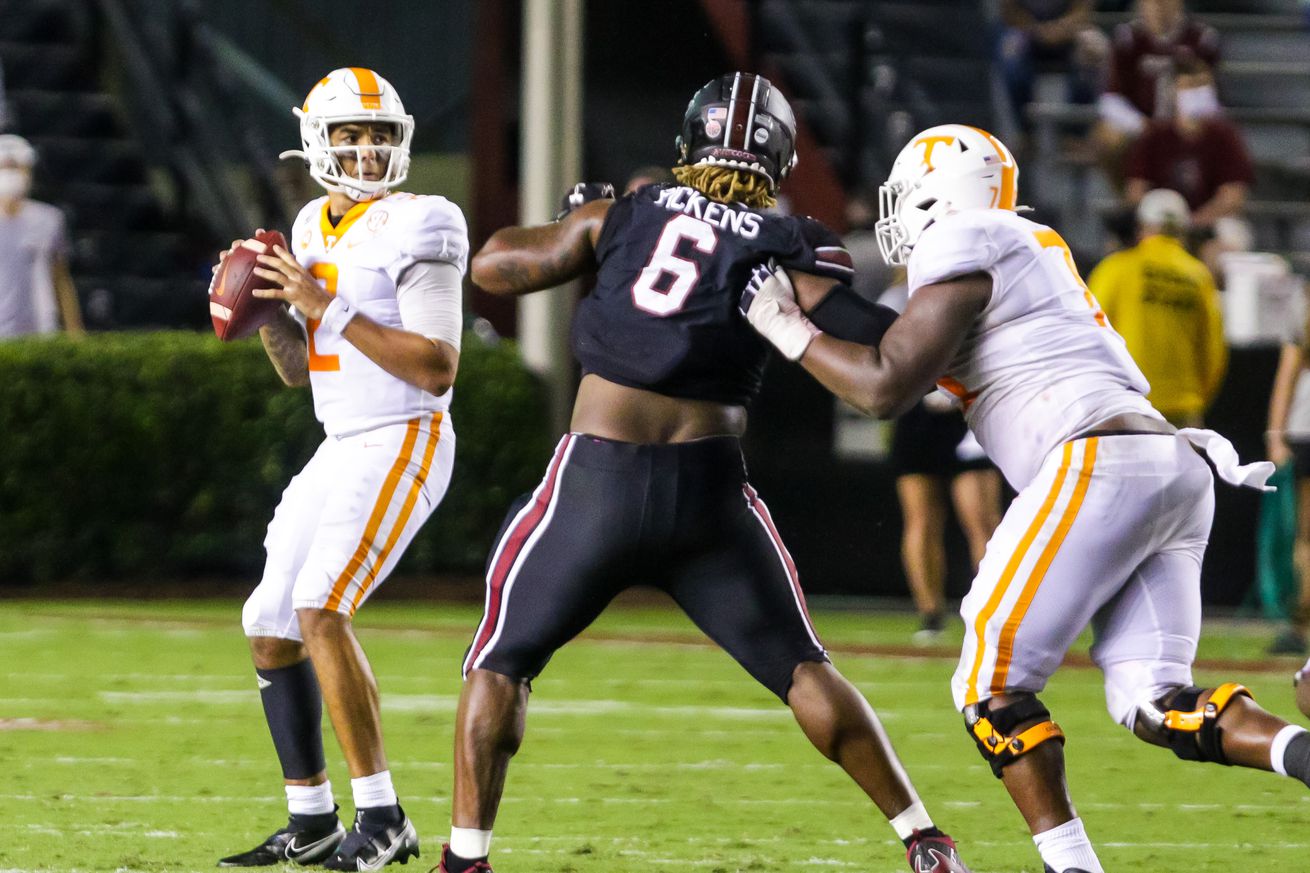 Jarrett Guarantano had a solid night, but he needs to keep improving. | Jeff Blake-USA TODAY Sports

There was a lot to like from last night, but Tennessee needs more out of its starting quarterback.

This isn’t anything earth-shattering. We all know quarterbacks impact the game of football more than any other position. A team typically only goes as far as the quarterback can take them.

But it’s especially true (so far) in the case of the Tennessee Volunteers.

This is obviously about Jarrett Guarantano. The fifth-year senior had a solid outing against the South Carolina Gamecocks. He completed 19/31 passes for 259 yards and a touchdown while helping lead Tennessee to its seventh straight win dating back to last season.

And man, the offensive line looked really good. But I digress.

Back to Guarantano. Overall, he played well. There were times, however, that he looked like the Guarantano of old. If Tennessee wants to take the next step in 2020, then he has to shed his old habits.

He overthrew open receivers on several occasions and there were times when he still struggled to get a feel for the pressure around him. Many of the overthrows were a big reason why certain drives stalled out and the Vols were lucky to fall on Guarantano’s fumble after Kingsley Enagbare’s first sack.

“[Guarantano was] inconsistent,” Jeremy Pruitt told reporters after the game. “He made some really … his decision-making was good. I think there were a couple times, maybe, he was confused a little bit. His decision making was good. I know he would like to have some throws back. He was high on some throws. But you know what, we ain’t had hardly any wide receivers practice for a long time. We’ve got them back for the last five days. Hopefully we can clean some of this up and get our timing better for next week.”

There were several excellent moments, as well. The check down to Eric Gray on the flea flicker showed tremendous awareness. The deep ball to Josh Palmer on the touchdown was absolutely glorious.

To be fair, Tennessee’s deficiencies weren’t all about Guarantano, either. The Vols botched the snap on a punt attempt in the first quarter. Jeremy Banks was responsible for two crucial penalties and one even led to a field goal for South Carolina. The defense was shredded a few times, especially on Shi Smith’s 29-yard touchdown reception. Those were just a few mistakes to name.

But Guarantano is the one with the ball in his hands on every play. He is the one who bears some burden on every offensive snap. The Vols were good last night, but they could be better. And if they want to get there, Guarantano has to lead the way.