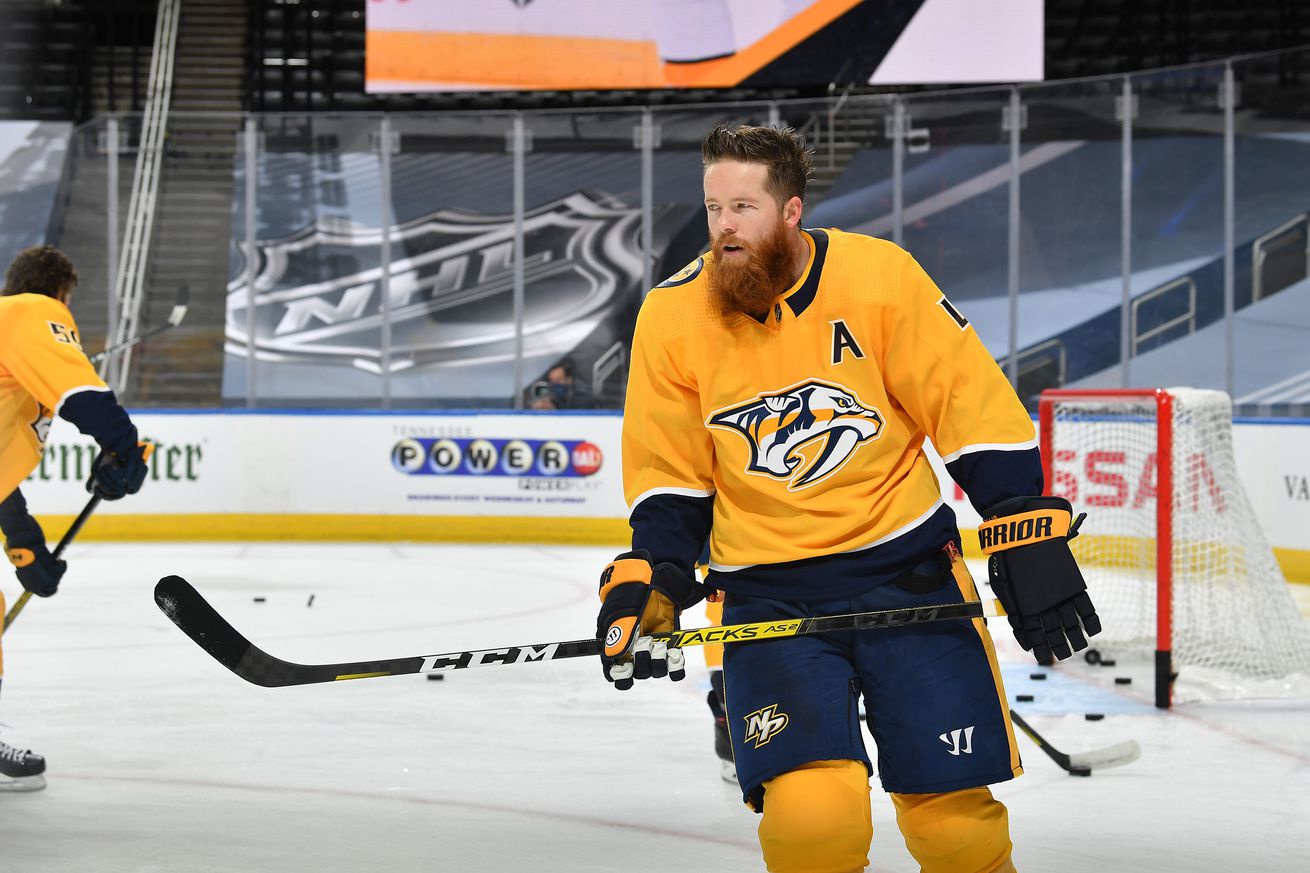 Today we review the one and only human rocket ship.

After a down 2018-19 season, Ryan Ellis bounced back and put in one of his best years yet in this 2019-20 season. Roman Josi’s Norris Award overshadows every other defender on the Predators, especially his partner in Ellis. There’s also an argument that Ellis’ numbers this season were boosted by just how good Roman Josi was. However, such contentions are unfair, as Ryan Ellis was excellent in his own right, arguably being one of the top ten defenders in the league this season.

So, overall, what grade did Ryan Ellis earn for this season? Let’s dive into it.

For giving Ryan Ellis a grade, we will evaluate three elements of his season: offense, defense, and his expectations.

For offense, we are looking for performance in all three zones. A team is on offense the moment it starts to break the puck out of their defensive zone, which continues through the neutral zone and culminates in offensive zone attack. Did Ryan Ellis perform well in all three zones? Was he a catalyst for offense?

The same goes for defense, as the moment the other team breaks the puck out, your team is on defense. We’re looking for strong pinching in the offensive zone, disruption and not getting caught flat-footed in the neutral zone, and strong zonal awareness in the defensive zone. Were players able to blow by Ryan Ellis as he defended the blue line? Did he mark his responsibilities in the defensive zone with due diligence?

Finally, there are expectations. Ryan Ellis should perform at the level of his role: a top-pair defender. He’s also supposed to be an offensive catalyst who contributes to the power play with his one-timer from the point. Did he accomplish that? If so, by how far did he surpass his expectations?

Ryan Ellis had a strong offensive season but, at the same time, is perplexing. This is because, in the systems that the Predators utilize, Ellis is given every opportunity to be an effective weapon on the power play. He was not. Yet, despite failing his duties on the power play, he had such a good season at even strength that it’s hard not to look on his offense this season fondly.

It’s funny, because it’s the exact opposite criticism of this year’s Hart Trophy winner, Leon Draisaitl. The Oilers’ center Draisaitl was unbelievably good on the power play this season, but was pedestrian at even-strength hockey. Draisaitl is a dramatic example, but players should (or rather, need to) be better when on the power play than at even strength.

The fact that Ryan Ellis was worse on the power play than even strength can be attributed to a couple of factors that compliment one another. First, the Predators’ power play was simply bad across the board. Nashville finished 25th in the league in power play effectiveness, scoring only 17.3% of the time. For comparison’s sake, the best power play in the Central Division belonged to St. Louis, which finished third in the league with a 24.3% conversion rate. The power play was not functional under former head coach Peter Laviolette, and John Hynes understandably opted not to force players to learn a new system in the middle of the season.

The second factor is that Ryan Ellis was consistently taking low-danger shots on the power play. While he has a good one-timer from the left point, his shot simply is not elite enough. There’s nothing inherently wrong with his shot—Ellis does have a good shot. However, goals from that spot come from players defined by their shot, like the Alex Ovechkins, Patrik Laines, and Shea Webers of the world.

Nonetheless, since Ellis’s goal-scoring explosion against the St. Louis Blues in the 2016-17 playoffs, he has been used exclusively in his one-timer role on the power play. Truth be told, a lot of Ellis’s success came from a 5’9” Viktor Arvidsson perfectly timing when to jump so that Arvidsson could get a little extra height to cover an opposing goalie’s eyes. It was never going to be a sustainable strategy.

The answer is simple—he was assigned the point on the power play and told never to leave it. In being given the freedom to rotate and attack at even strength, Ellis was able to use his talent to access, and help his teammates access, those dangerous areas of the ice where generating a goal is easier. Ellis, at his core, is not a point shooter—he’s a mobile defender.

This goes to show that Ellis’s power play numbers come from being misused and are not a fault of himself or an indication of a lack of talent. It’s clear that, given freedom, Ryan Ellis was an elite offensive player this season. Here’s hoping that John Hynes recognizes that when he implements a new system next season.

Ryan Ellis has never been the physical defender who bullies opponents off the puck, but he does a fine job using his mobility to quickly cover opponents when his responsibilities shift. In the same vein, Ellis does a really nice job recognizing when opposing threats are uncovered and that he needs to shift those responsibilities. As the bottom two charts show, he’s stifling in the defensive zone due that spatial awareness and his quick feet.

One area in which he could improve in the defensive zone is in being more aggressive. Sure, it would be great if he was better about clearing bodies out from Pekka Rinne and Juuse Saros’s lines of sight, but he simply doesn’t have the frame to be effective at that. However, as the bottom left graph indicates, he lets opponents generate a fair bit of offense from the bottom of the left face-off circle. Now, he does a great job right in front of the crease, which shouldn’t be sacrificed, but his primary zone of influence needs to extend further than just the crease. Ellis is a player who is very mindful of his responsibilities, but this sometimes leads to him being a little too cautious in the defensive zone.

As for the neutral and offensive zones, Ellis’s mobility lets him get into position to stop a lot of passes. However, his overly cautious nature seems to again lower the ceiling of what he could accomplish. Ellis often sits back to defend the blue line, but is liable to being caught flat-footed. Someone with Ellis’s speed should be more active in the neutral zone. Why is he covering off passes when he has the talent to intercept them? Every team would rather gain possession than simply deny options. And yes, there is some risk in jumping into a lane and stealing a puck, but Ellis absolutely has the talent to do so.

Ryan Ellis plays excellent reactive defense. Nonetheless, he has the talent and quickness to play proactive defense. He’s great at eliminating an opponent’s options, but he needs to jump into the play and become more disruptive.

Ryan Ellis came into this season off of a season where he set a career high in points, but wasn’t necessarily impressive in doing so. This season, he played a more fundamentally sound game and reaped the rewards of it. In playing a season shortened both by COVID-19 and a concussion in the Winter Classic, Ryan Ellis posted 38 points in 49 games. He only missed his career high, which he set in a full 82 games last season, by a mere three points.

If that doesn’t contextualize how good Ryan Ellis was offensively this season, I don’t know what to tell you. Ellis was not arguably a top-ten defenseman in the NHL this season—he absolutely was one.

We can lament his performance on the power play and his defensive shortcomings, but the power play is more the fault of a flawed system and Ellis was still a good defensive player. Obviously I provided a critique of Ellis above, but just because a player has areas to improve in does not take away from what they did well.

This was the best season in Ryan Ellis’s career. And, just as one can say that maybe Ellis was helped by the great season that Roman Josi had, Roman Josi would not have won a Norris Trophy without Ryan Ellis being tremendous this season. That partnership is exactly what you want in a first defensive pairing.

Ryan Ellis fully deserves a solid A for his season. He set career point-per-game highs, did so relying on strong fundamentals instead of a streak of luck, and provided exceptional even-strength offensive presence. While he could bear to be more aggressive when defending opponents, he still did a fine job. Finally, while he was not effective on the power play, that lack of effectiveness came from the system he was used in, not his own decision making.