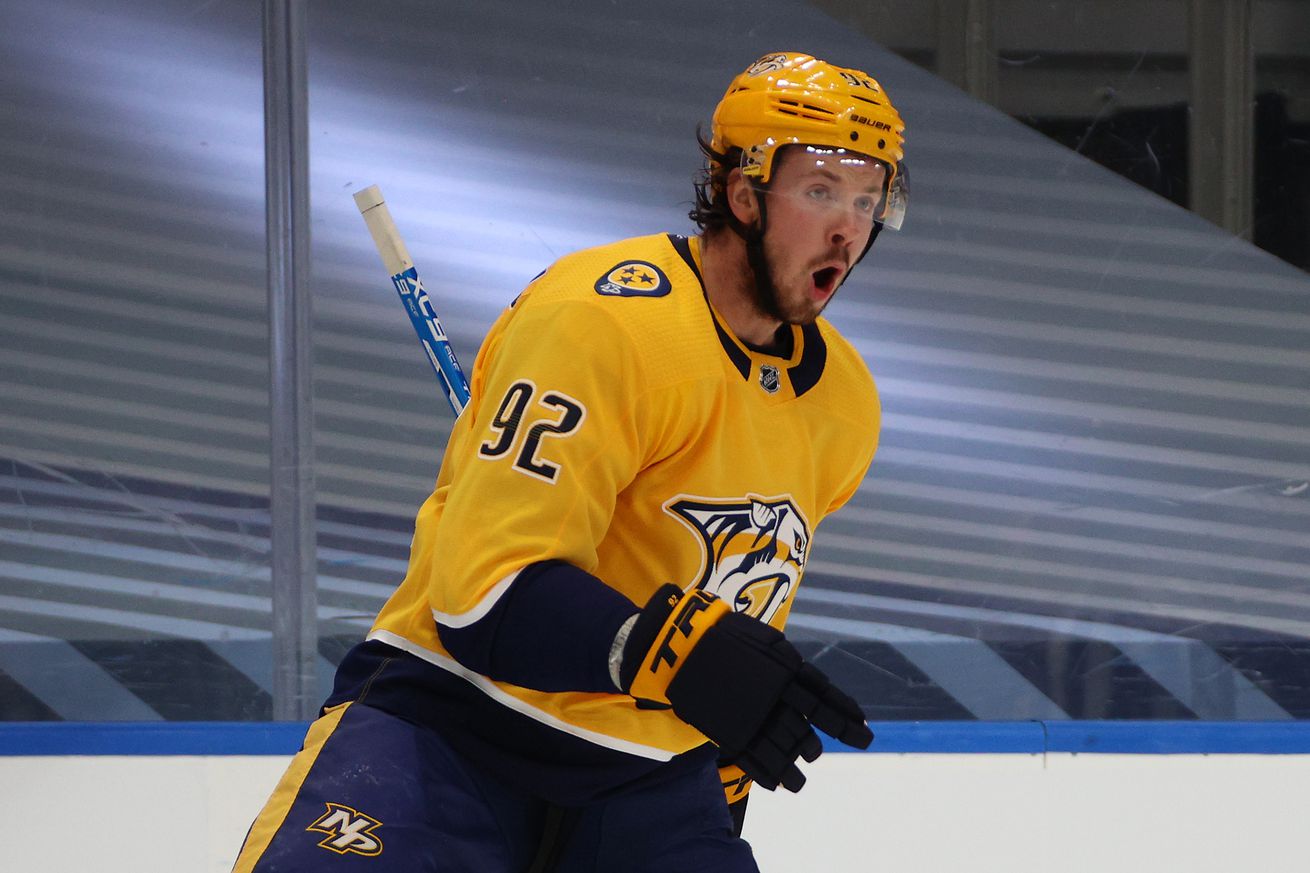 The top-line center struggled to create offense, but found new life after the NHL resumed play.

Ryan Johansen’s usually reliable gameplay was noticeably absent during the 2019-20 season—but the same could be said for nearly every Nashville Predators player this season. It’s not that Johansen was terrible on the ice himself, he just found himself stuck in a rut of not being able to create offense.

There are many factors at play to look at when discussing why there was a blockage of offensive production for Johansen. Those factors are largely: struggles in a stale coaching system that’s no longer working, lack of line chemistry due to constant shuffling, and a midseason coaching change.

Below, I’ll break down Johansen’s season and grade him based on the results.

Last year, I talked about Johansen’s reliability when it came to creating offense through getting the puck to the right player to make the shot in the back of the net. He is still making those great passes, there were just fewer than normal this year.

If you take a look at the data hand-tracked by Corey Sznajder (@shutdownline), you’ll see that though Johansen still isn’t shooting the puck himself, he’s in the top 15 players at being the last person to pass the puck before someone else takes a shot. He’s still making great passes to open players.

In looking at another one of Sznajder’s charts, this one focusing on the type of passes made, Johansen is among league leaders in great passes. He makes accurate, high-danger passes, but is also great at setting up point shots.

Johansen also finally found his footing in the Stanley Cup Qualifiers when the JoFA line was reunited. He recorded an assist in each of the four games played and was a pivotal player in those games. It’s unfortunate that the season paused when it did (for many reasons, mostly for the horrible impact COVID-19 has had on people across the U.S.), because with Johansen’s productivity in the postseason, one can assume this would’ve happened in the final two months of the season as well. This could have potentially set up Nashville for greater success in the playoffs.

Ryan Johansen is no longer a scorer and will probably never be a scorer again. He’s found his role as a passer and offense creator. Unfortunately, the thing he did the very best during the 2018-19 season was not what he was known for this season. Where Johansen led the team in assists last season, this season he ranked sixth among his 22 teammates in assists. As discussed above, the passes he did make were excellent, but due to lack of line chemistry, there was also a lack of scoring.

As seen in the chart above from Evolving-Hockey.com, Johansen’s defense for this season was bad—bottom 20% of the league bad. On a team that’s weak defensively as a whole, you want your 1C to be a more complete player.

Though the Stanley Cup Qualifiers only brought more disappointment for Predators fans, there were bright spots as well. The JoFA line was reunited and, as said previously, Johansen recorded an assist in all four games. In the best game for Nashville of the series (Game 2), Johansen also found the back of the net. It isn’t something you see often from him, but when he does score, it’s a thing of beauty.

As my colleague Bryan Bastin said, “Overall, his goal scoring days were beat out of him by Lavi. He’s still a top-tier passer, but if he can go back to normal under Hynes, he’d be a better complete player.”

Johansen had a very stale season. I feel like stale is the correct word to use in this situation because it wasn’t overtly bad, but it wasn’t impressive or memorable either. Like most of the team, he was just stuck. However, a full season under a new coach with an entire season to perfect a new system—hopefully with less line shuffling—should bring about positive changes from the entire team. I feel no reason not to be confident in saying Ryan Johansen will return to creating offense and be among team leaders next season.

I’m giving Johansen a C. As a whole, his play wasn’t horrible and it wasn’t great either. It was just average—and I mean that in the sense of the word your school teachers used to insult you. “Average is 50%. 50% is failing. Don’t be average,” said my school teachers before every test. Did anyone else have teachers that said that or were mine just way better at psychological warfare? I digress…

Anyway, vote in the poll below for the grade you’d give Ryan Johansen and let’s discuss it in the comments.