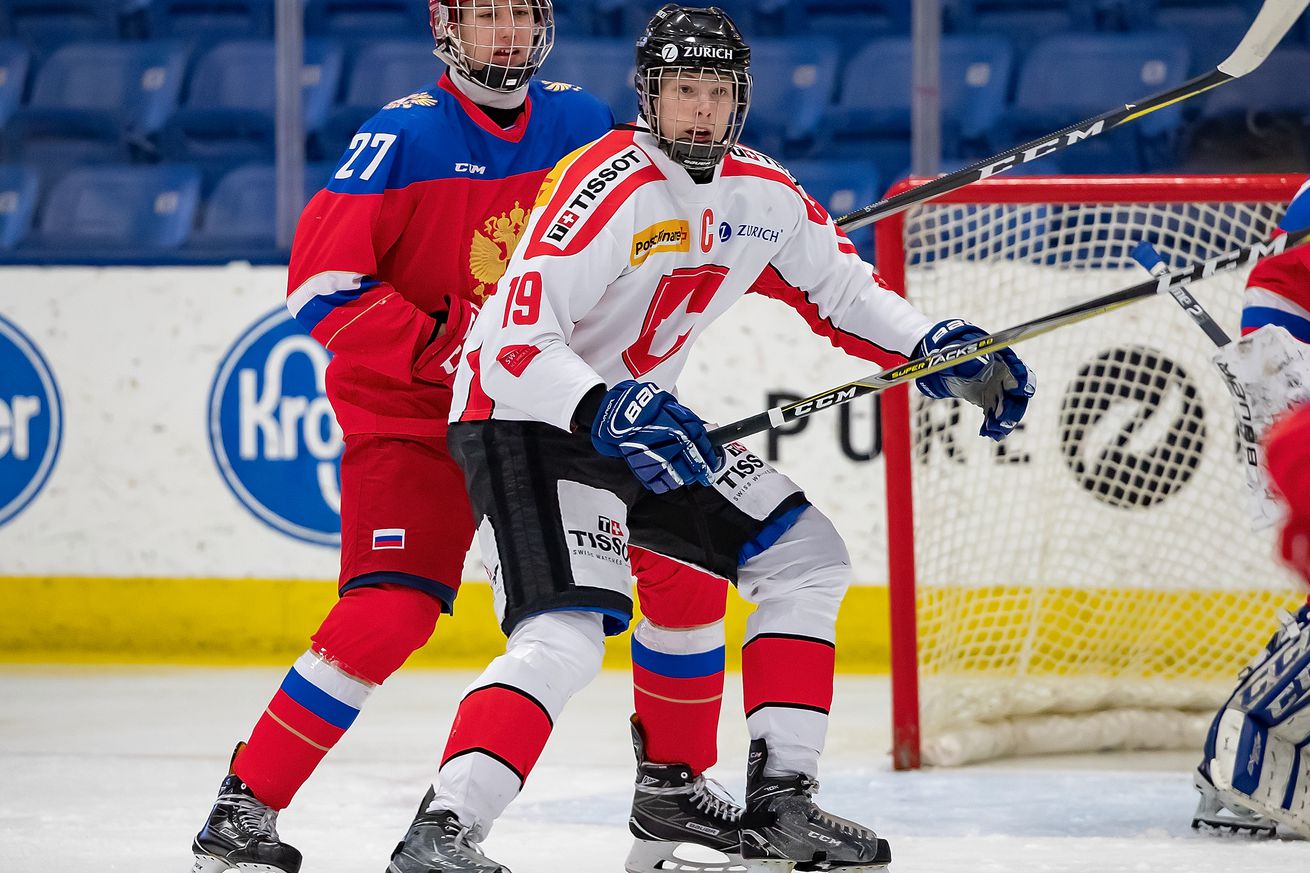 Mukhamadullin is one of the first 2002-born skaters to debut in the KHL.

Despite the 2019-20 NHL season being on hiatus, 2020 NHL Entry Draft coverage here at On The Forecheck continues. It’s incredibly possible, in fact maybe likely, that the Draft is postponed from the end of June; it’s also possible the league may have to take unprecedented measures to conduct the annual event. Regardless, this is the latest in my draft prospect profiles here at OTF.

A majority of the European junior and pro leagues had finished their regular seasons before the COVID-19 pandemic shutdown play for the balance of the year, so there is still plenty of game tape on the prospects I want to profile.

In this edition, I’ll profile one of the more fascinating Russian prospects in this year’s class: defender Shakir Mukhamadullin.

Mukhamadullin has grown up playing entirely for his hometown club, making his MHL (the top junior league in Russia) debut at 16 years old in the 2018-19 season. That season, Mukhamadullin joined Russia internationally at the U18 World Junior Championship and the World U17 Hockey Challenge, going scoreless in 12 total games on a defense corps led by Nashville prospect Semyon Chistyakov.

In 2019-20, I’m not sure you could find many single-season resumes of draft-eligible prospects longer than Mukhamadullin’s. The 6’2” defender began the regular season playing for Tolpar Ufa of the MHL, but that was after he spent his August skating for Russia’s U18 team at the Hlinka Gretzky Cup.

After 10 points in 13 games, Mukhamadullin matriculated to the KHL (with a single stop in the VHL, too). His 0.77 points per game in the MHL were third among Tolpar defenders, and despite just recording one point in 27 KHL games and averaging just over three minutes of ice time per game, Mukhamadullin is the only 2002-born skater who played more than two games in the entire KHL season.

Mukhamadullin also made international stops for Russia at the U19 World Junior A. Challenge—where he scored the gold-winning goal despite a forgettable tournament—and for Salavet Yulaev Ufa at the Spengler Cup.

Before you dive into the scouting tape below, I want to warn you at how infuriating Mukhamadullin’s play can be sometimes. You can tell right away how gifted he is with the puck on his stick and how well he skates for his size, but then he’ll turn the puck over or just be absent from play and it will leave you scratching your head.

Mukhamadullin is a comfortable puck handler and maintains good awareness when playing off the puck; it’s helped him come out of battles with possession and a head of steam up ice. In the clip above, Mukhamadullin (#85, green) comes in from a line change to clean up a neutral zone battle. Three quick moves around the opposition and quick acceleration into the zone come next and before you know, the defender has buried the puck with a nice wrist shot.

I noted above how Mukhamadullin has a good first pass out of the zone. This is true when he connects on those passes, but he’s more known for joining the rush with or without the puck. Take a look above: before the puck carrier has even taken a stride outside of the defensive zone, Mukhamadullin is cruising up ice nearing the opposition’s blue line. Once Tolpar finally maintains possession in the offensive zone, Mukhamadullin (a defender) spends half of the shift looking for space below the hash marks.

I’m entirely comfortable with position-less play from defenders. But sometimes Mukhamadullin can get caught lingering away from the blue line. In the scoring chance above, it’s honestly impressive how aggressive he is in joining the rush. He doesn’t peel off and return to the point when the initial chance fails, but instead he re-engages as the net-front forward and assists on a good scoring chance.

Other times, however, Mukhamadullin isn’t so engaged in creating scoring chances. In the clip above, he nearly turns the puck over right in the slot and then, after collecting it for a zone exit, turns it over in the neutral zone. It’s just natural that these stick-handling based zone exits won’t be as successful at higher levels, but what’s frustrating is that you can count nearly five seconds of Mukhamadullin just not reacting to his own turnover. He does a decent job of getting back into the zone, but is more concerned with zone play and allows a high-danger chance on his goalie.

Sometimes his turnovers can be seen as just a miss on a puck, and that’s certainly fair, but he repeats them often and with such recklessness that it could keep him down on some teams’ draft boards.

Mukhamadullin has a great defensive foundation due to a long wingspan and a big body. For the most part those are helpful in breaking up zone entries (seen above) or keeping opponents to the perimeter of the zone. In watching his tape, however, I’ve noticed he almost overthinks his next move when retrieving pucks. If he can sharpen up his decision-making and cover up the holes in his defensive stance that can be exposed, then I like his defensive upside. 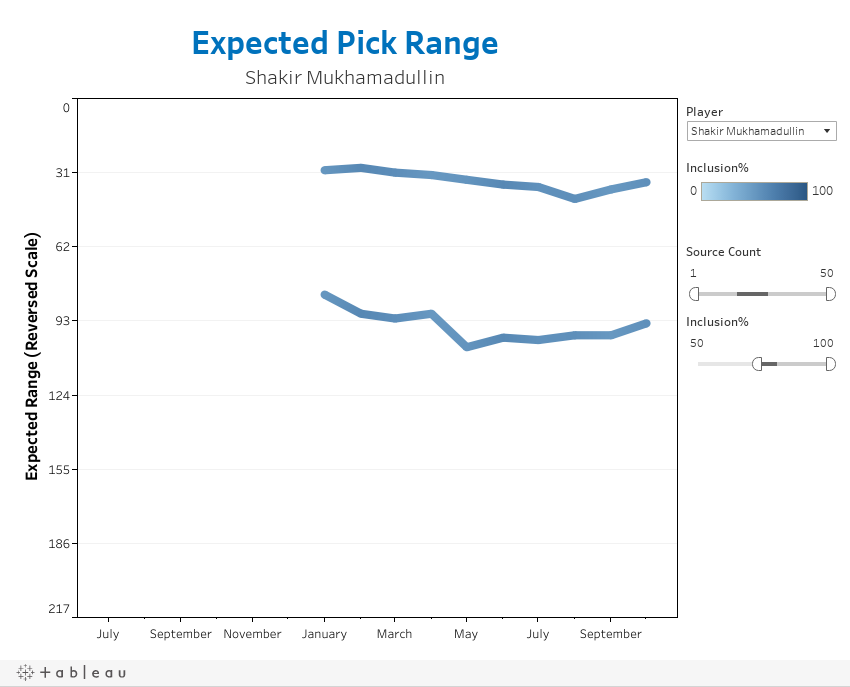 Mukhamadullin’s projected range is a bit all over the map. I’ve seen some who like him as high as the late first round, and I’ve seen just as many who wouldn’t touch him until round three. As usual, I think the answer is probably somewhere in between. He could legitimately be a first-round talent, but I can see why talent assessors may see him as a project.

All statistics are courtesy of eliteprospects.com and liiga.fi. Thank you to prospectshifts.com for providing some of the Liiga game footage used.