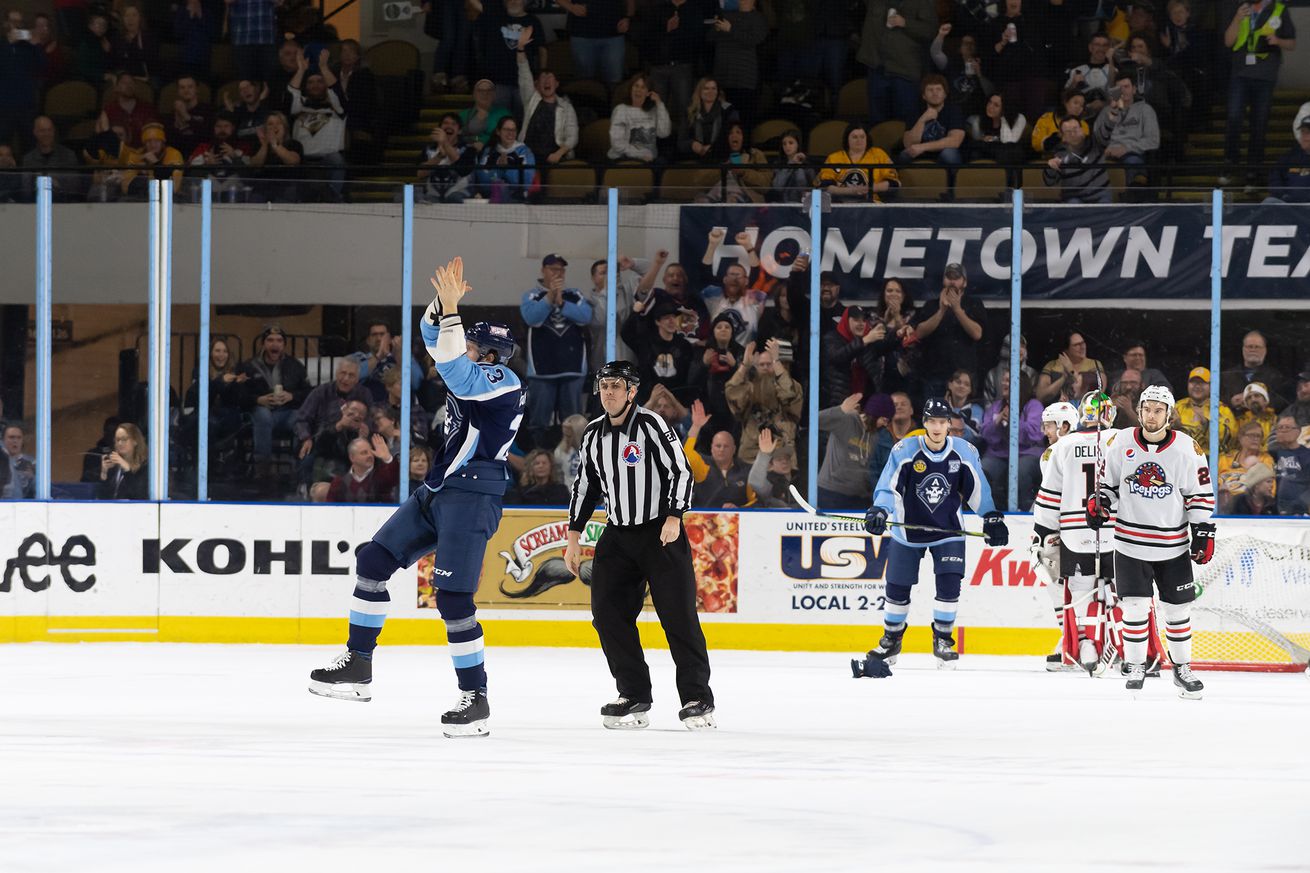 On Wednesday, the Nashville Predators announced they have re-signed Michael McCarron to a two-way, one-year contract for the 2020-21 season.

A trade in January sent Laurent Dauphin to the Montreal organization in exchange for McCarron. The 6’6” center then suited up for 27 games for the Admirals and joined Nashville in the playoff bubble in Edmonton.

After coming over from Montreal last season, McCarron doubled his goal output (10) and added three assists in 27 games for Milwaukee. Despite that, his 0.48 points-per-game this season were his second-worst since joining the AHL for the 2015-16 season. Only seven of his 15 goals this season were scored at even strength.

Often centering a rotating set of wingers from the bottom six (and seeing significant ice time on special teams), McCarron was a solid shot contributor, recording 16.23 individual attempts per 60 minutes, 5.163 of which were from high-danger positions.

Despite his shooting rate, McCarron was often saddled driving lines with skaters like Mathieu Olivier, Tanner Jeannot or Frédérick Gaudreau. As a result, McCarron struggled at out-possessing his tough assignments, recording a 50.34% Corsi in seven games tracked.

In transition, it was clear where McCarron’s comfort zone was. Not a player built for speed or quicker pace, McCarron often relied on a traditional dump-and-chase style of play as seen in his zone exit success rate (80.00%) versus his zone entry success rate (40.74%).

It’s clear by the time he left that the organization had lost some faith in Laurent Dauphin fitting into their offensive fold. With just seven goals and 16 points in 33 games, Milwaukee was in search of a center with more utility—one they could rely on regardless of linemates. Enter Michael McCarron.

Behind Rem Pitlick and Tommy Novak, McCarron helped round out the Admirals’ top three centers. However, his time in Milwaukee hasn’t been defined by driving a specific line but by cashing in on rebounds, screens and opportunities on the power play.

As noted above, McCarron wasn’t counted on for an elite transition or possession rate. But his positioning when entering the offensive zone often came with good puck support and, sometimes, right-place-right-time positioning. It was in those moments he could capitalize on unforced errors and convert on his lethal shot, as seen above.

With his 6’6” frame, it’s obvious McCarron was heavily used as a screen both at even strength and on special teams. It doesn’t always require tons of finesse, but there’s something so critical about what a frame like his can do to a goalie’s vision. McCarron plays with an active stick at the net-front, too, often creating small tips or deflections that lead to goals as seen above.

Frustratingly, McCarron isn’t so much a dynamic skater (in any zone). On defense though, it becomes a concern at times. In this shift above, you’ll notice how reactive he is to the play, barely moving his feet and allowing a shooter from the point to simply coast in for a massive rebound before barely turning around. I’d like to see him pick up his pace and attack that open ice more.

I noted above how reliable McCarron was in exiting the defensive zone; he’s a near guarantee to hit the Milwaukee blue line with possession. But his transition pace is too slow to be dynamic, so he often relies on short passes (above) or dump-ins to advance the puck. Another thing I noticed: McCarron was the face-off taker for all his shifts, but often rotated up to the point in the defensive zone while a player like Frédérick Gaudreau took defensive responsibilities at center.

Lastly, McCarron came from Laval with a reputation for stupid mistakes: ill-timed fights, bad penalties, misconducts. I don’t recall it ever being a severe issue in Milwaukee, but it can be frustrating watching his decision-making. I appreciate what a player of his size can do on the forecheck, but too often he hits the blue line and decides he’s completing his check no matter what. It results in awful penalties like the one above, where he could be dynamically attacking the Rockford breakout and forcing a giveaway instead.

McCarron is a fine AHL player who fits well into Milwaukee’s middle-six game plan and can be helpful on special teams. With the organizing likely moving on from Gaudreau, this signing was a foregone conclusion.

McCarron’s contract is a one-year deal with a $700,000 cap hit at the NHL level and a $300,000 salary in the AHL. The deal is entirely base salary with no bonuses, and, upon expiry, McCarron will be a restricted free agent.

All statistics are courtesy of eliteprospects.com or hand tracked by me. All contract information is courtesy of capfriendly.com.