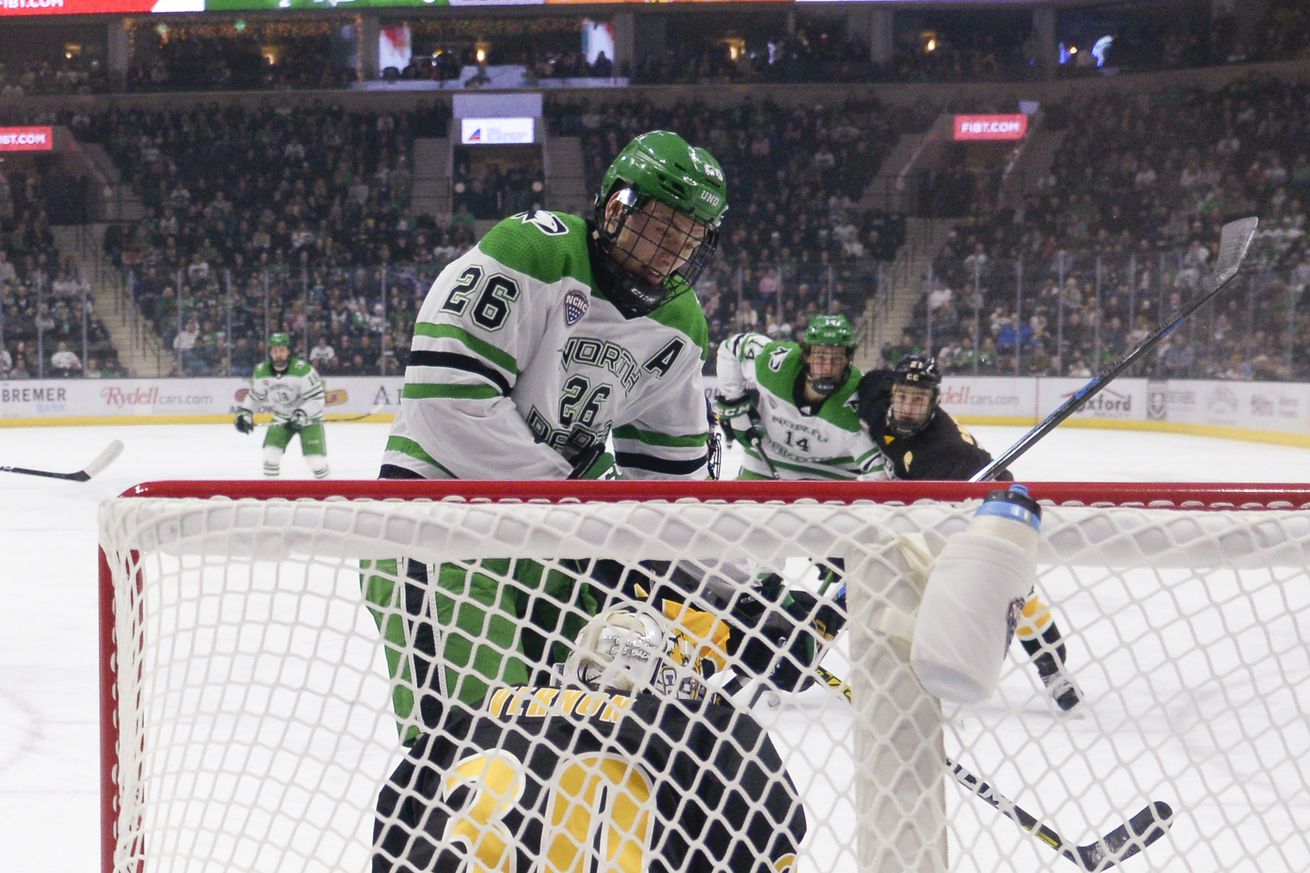 The 24-year old was a four-year player at North Dakota.

On Thursday, the Nashville Predators announced the signing of college free agent, Cole Smith. Never drafted into the NHL, Smith played four years at the University of North Dakota including 137 total NCAA games.

Smith’s entry-level contract is a one-year, two-way deal beginning in 2020-21.

After a stretch of five consecutive healthy scratches to begin his collegiate career, Smith went on to play four seasons for the Fighting Hawks appearing in 137 games, scoring 24 career goals and 51 career points. By counting stats, Smith’s senior campaign was his best; he finished eighth on the team in scoring (18) and fifth on the team in goals (11).

As my colleague Bryan noted earlier, Smith scored at a 0.47 primary point-per-game pace this season – both at even-strength and in all situations – which lands him sixth among all Fighting Hawks’ forwards. Most notably, 13 of Smith’s 18 points this year were primary ones scored at even-strength, and he added three power play goals and one shorthanded tally.

Primarily relied on for his defensive abilities, it’s unsurprising the Smith (-11.50%) and his two linemates – Gain Hain (-11.95%) and Mark Senden (13.96%) – had three of the four lowest relative goals-for rates at even-strength for North Dakota this season.

Cole Smith has also been tabbed by the National Collegiate Hockey Conference’s (NCHC) as a finalist for this year’s best defensive forward award. Brad Schlossman of the Grand Forks Herald pointed out that four of the award’s five previous winners have gone on to play in the NHL (although all of them scored at significantly higher rates than Smith did in the NCAA).

When you watch Cole Smith’s game, the type of game he’s successful at immediately stands out. He understands how passing lanes develop and close well, is an annoying presence (in a good way) on the forecheck and provides hard-to-move net-front positioning.

In the clip above, Smith (#26, black) demonstrates how effectively he can use his big frame on the forecheck. His skating stride may come off as wonky as he chases the puck through the neutral zone and that’s common for someone standing 6’3”, but he does have good form in his push-offs and his strength allows him to win a puck battle he is out-numbered for.

The benefit of Smith’s wingspan is his ability to seal off passing or skating lanes as opposing teams are breaking out of the zone ore looking to gain entry on the power play. In the clip above, notice how he adjusts to the puck-carrier as soon as he hits the ice and forces a turnover with his stick and then body positioning which ultimately leads to a controlled zone entry.

Smith adds value on special teams, too. On the penalty kill shown above, I love how he attacks the puck along the wall with his stick consistently blocking Omaha’s bailout pass to the point. He essentially forces the opposition to give up the puck since the remaining Omaha skaters are too concentrated near the net. But his smart shorthanded play doesn’t stop there; he capitalizes on the turnover and executes a smart zone exit without panicking and is eventually rewarded with a shorthanded assist.

One of my favorite aspects of Smith’s special teams play is the net-front presence he is on the mad-advantage. What’s noticeable is that it’s not stagnant positioning, rather he’s constantly shifting laterally and adjusting his stick. This is so he doesn’t force his teammates to shoot through him and so he can better respond to rebounds or deflections.

Smith, despite executing sound technical skating ability, isn’t the quickest forward on the ice. It’s not so much a product of his push-off motion but maybe more his size. He also may not be the most effective “Forward-1” on zone entries. Regardless, he can be a solid minor-league addition who rotates well on special teams units and provides intelligent and obnoxious (in a good way) defensive play.

Smith’s signing age for his entry-level contract is 24 meaning he was eligible for just a one-year deal. That contract carries a cap hit of $792.5K with a $92.5K signing bonus and $132.5K in potential performance bonuses.

Smith’s salary in the minors will be $70K, and he will be a restricted free agent next summer.

All statistics are courtesy of eliteprospects.com and pick224.com. All contract information is courtesy of capfriendly.com.