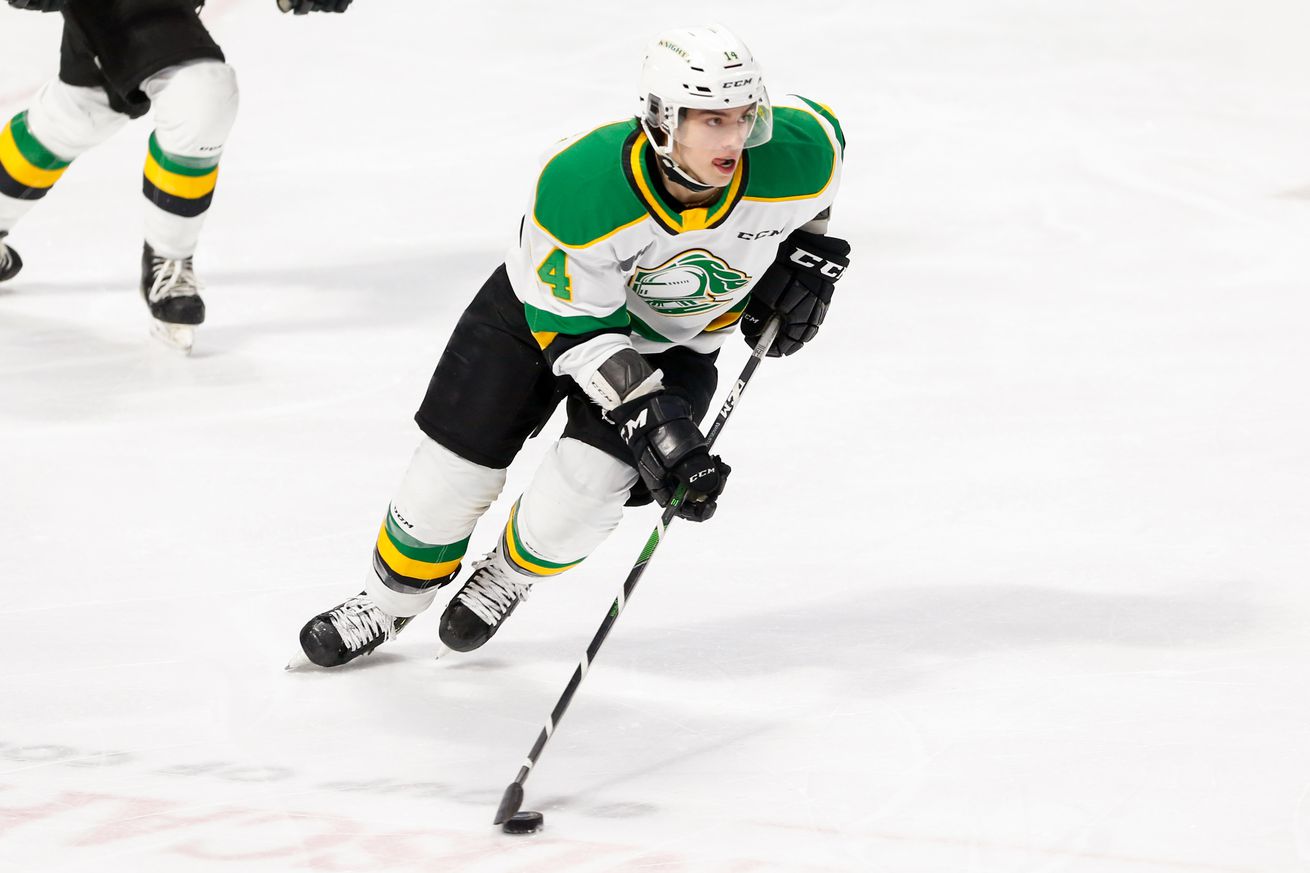 We take a look at the new talent from leagues other than the USHL, including first-round pick Iaroslav Askarov.

So who did Nashville add to their pipeline, what’s there to like and not like about their games, and what do their development paths look like? I answer those questions and more below.

The crown jewel of Nashville’s draft class, Askarov is a generational talent in net who projects as this organization’s franchise goalie for a decade-plus moving forward. There’s not much that hasn’t been said about the Russian goalie; he’s excelled at every level of play against competition several years his senior. Despite the small sample size, that trend has continued in the KHL this season as he’s posted a 0.974 save percentage through three appearances.

With a 6’4” frame, you wouldn’t expect Askarov to need to be so agile, but that’s what sets him apart. There is no single calling card to his game: blocker side covered? his glove hand will be in excellent position; looking to beat him up high? he’ll recover in time from the butterfly, etc. Askarov is dynamic in his movements, challenging shooters and forcing them to make quicker decisions. Even when his puck tracking leads him to being beat laterally—as seen above—he possesses the athleticism to extend his legs that extra inch and come up with such brilliant saves.

His squareness and angling to the puck are almost always excellent, and his strength and stance allow for quick recoveries to cover any rebounds like in the play above.

When Askarov gets beat, it’s often on a play where there’s little he can do. His positioning isn’t always perfect, and he can get carried away at times with his cross-crease movements, but it takes a truly deceptive release or slick move to get the puck past him.

In the clip above, Askarov displays great positioning to challenge the shot and not cede space to the screening player. As he’s slowly diving into a drop-down position, he quickly recovers for the rebound and is able to extend his glove to shore up any open corners. It seems so simple to say, but he’s truly never out of reach or agility to make a challenging save.

With his KHL contract running through 2021-22, Askarov will spend the next couple seasons in the SKA organization before coming straight to the NHL, per David Poile’s stated plans.

After dealing away the first of their two second round picks, Nashville selected forward Luke Evangelista from the OHL’s London Knights. In what was his first truly full season in the OHL, Evangelista finished fifth on the Knights in scoring with 61 points in 62 games. All but four of those points were score at even strength—an impressive mark—and his 0.5968 even-strength primary points per game ranked 11th among all draft-eligible OHL forwards.

Despite being just 5’11”, Evangelista carved out a role as a crafty playmaker for London this season. He’s a cerebral player on and off the puck, something I admittedly didn’t give him enough credit for pre-draft. He’s sound positionally at both ends of the ice and is always forcing defenders to chase. He then turns those engagements into catalyzing cycles or scoring chances, as shown above, where Evangelista (#14, white) spins off his challenge and delivers an excellent rebound pass right to his teammate.

I love how carefully he engages opponents when the puck is on his stick. He’s confident in his playmaking skill and can pull defenders away from teammates with ease. He just looks so poised in his positioning at all times—something I think will translate well to the NHL. On top of that, he can look off challengers with his above-average passing skills, as displayed above.

Evangelista has a quietly impressive finishing touch that leads to highlight reel plays like the goal above. Nashville is wise to bet on the developmental pedigree of the London organization, and I think Evangelista will turn into an elite OHL player in the next couple seasons but may have some growing pains when adjusting to a middle or bottom-six role in the NHL.

After further deliberation, I can’t find a more curious pick in Nashville’s draft class than Prokop. He’s certainly got a higher ceiling to his game than others, but I can’t imagine many other teams would have been rushing to the virtual stage at pick 73 to select him. A second-year WHL defender, Prokop finished the season with 23 points, including 0.2373 even-strength primary points per game (third among draft-eligible WHL defenders).

Too often in my viewings, I saw too stagnant positioning from Prokop (#6, black) once the cycle was established in his defensive zone as seen above.

But my colleague Derek Neumeier of Defending Big D offered his assessment of Prokop, as he has more close viewings of the Hitmen defender than I:

Prokop is a huge defenseman with a ton of natural athleticism and a great mentality for the game. [He] can get up to a really nice head of steam when he has the time and space, but hands and offensive vision are an issue. He should be the true number one blueliner for the Calgary Hitmen for the next two seasons, which will allow him to round out his game. I really like his odds of becoming a defensive, shutdown defender and penalty killer in the NHL, and he might even reach as high as the second pair if Nashville is patient with his development.

Prokop’s skating mechanics will undoubtedly look awkward in the clip above, but I love his lengthy leg extension and he has a solid recovery under his torso. For his size (and skill difference to the opponent he was chasing), I’m not sure Prokop has much to refine here to catch up to this play.

I’d say I’m more skeptical of Prokop’s NHL potential than Derek is, but we likely agree he’ll need significant time in Milwaukee after his WHL career comes to a close.

Wilsby is a fascinating pick, and you could make the argument he’ll be the first pick in this class to make it to the North American pro levels. At 20 years old, Wilsby was in his final year of draft eligibility and impressed with three goals and 30 points in 41 games at the HockeyAllsvenskan level in 2019-20, including 0.2195 even-strength primary points per game.

Despite my usual reservations about overage players, I’ve been impressed with his viewings in the SHL this season. Wilsby (#2, yellow) is a dynamic defender who will gladly take the first available route up ice. In the clip above, notice how quickly Wilsby can clean out the slot and then jump into the F2 position to chase the puck deep into the offensive zone. He uses his excellent skating mechanics and powerful edge control to constantly engage new parts of the offensive zone and force opponents to keep their head on a swivel.

In this clip, Wilsby calmly pulls the attacking winger in tight before dishing off the puck. Most defenders, especially those of his age at a professional level, would hold tight to the blue line here. Instead, Wilsby immediately cycles down low and quickly identifies a lane to a high-danger scoring chance.

Wilsby has great offensive instinct, unsurprising for someone who is pushing the boundaries of position-less hockey. The read he makes in the clip above to lead his teammate to his neutral-zone clearance is excellent.

There are natural concerns that Wilsby will need to tighten up his defensive game to be an impact player at the NHL level, but I think that’s just a matter of playing time. He’s largely sound positionally and maintains good gap control with an active stick as seen above. While he’ll need to refine his pivot timing and ability to force the play to the perimeter, he’s got a leg up in his ability to quickly turn these gap closures into a controlled transition up ice.

Nashville’s exclusive negotiating rights with Wilsby expire in June 2022, so this season will be a critical one for the Swedish defender. Don’t be surprised if we see an entry-level contract offered here this coming summer.

All statistics are courtesy of eliteprospects.com or pick224.com.