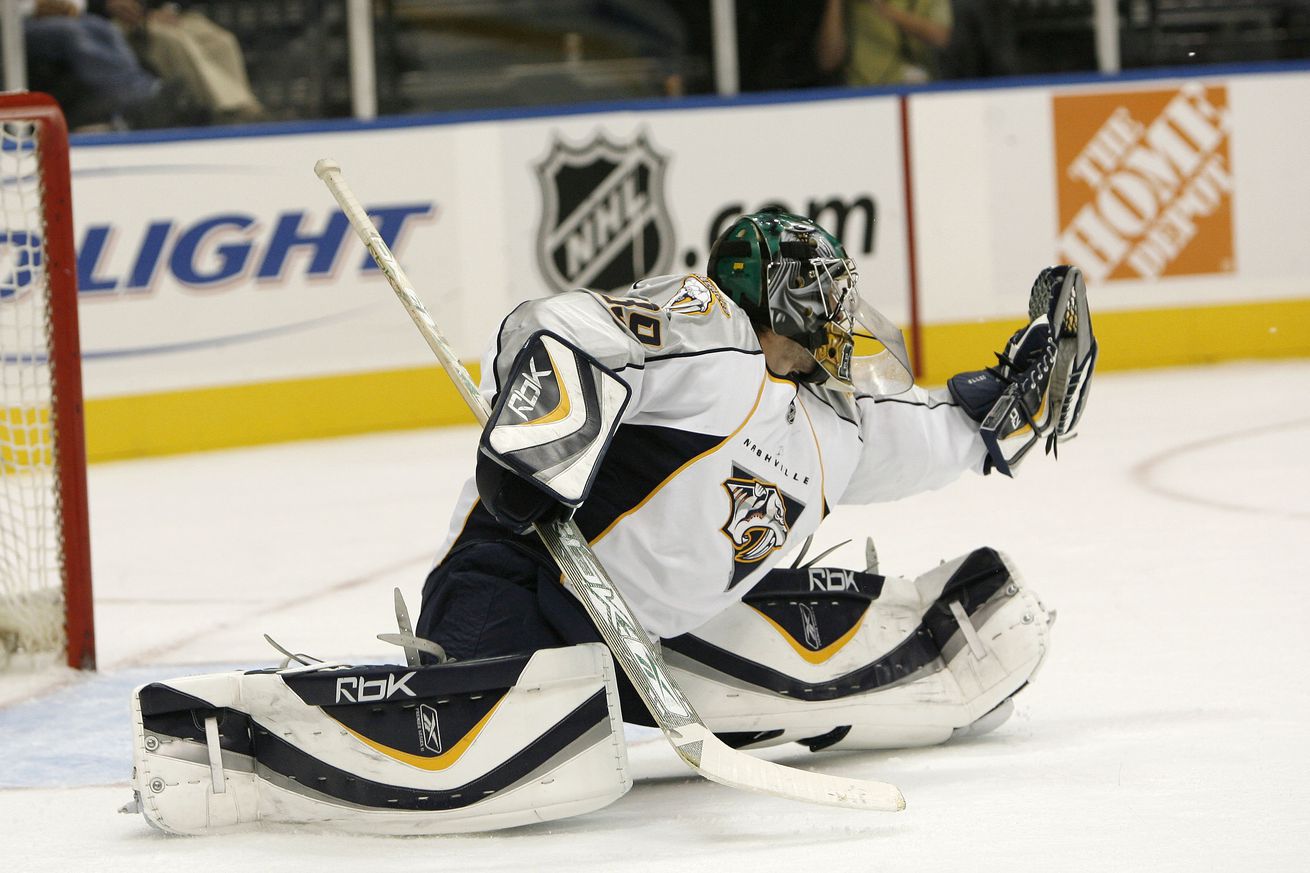 We’re back, folks! A new NHL offseason means it’s time for us to bring back one of last offseason’s most popular segments. We’re putting on our retro-glasses and breaking down all of the offseasons from Predators past: the good moves, the bad moves, the draft highs and lows, and all the fun stuff in between. If you missed any of last year’s grades, you can check out the links below.

So, let’s dust off the old articles and see where we left off.

Yes, we’ve made it to the BAD Summer, the one where Rihanna invited us under her umbrella (ella, ella, ella, ay, ay, ay,) the iPhone became a thing, and… yeah… the Nashville Predators almost moved to Canada.

Coming off the best two-year stretch in team history, owner and chairman Craig Leipold suddenly announced the sale of the team to Jim Balsillie, a.k.a. the Blackberry guy. Balsillie said he had no intention of moving the team, waited two days, then — for totally unrelated reasons probably — started accepting season ticket deposits in Hamilton, Ontario.

We know now how that situation played out. But at the time, that uncertainty created a dark summer for Predators fans and players alike. The roster resembled an Anton Chigurh scene from No Country For Old Men, with beloved players being jettisoned every day.

The most frustrating thing about all the turmoil was that it happened after Nashville’s most successful season to date (besides the whole “getting destroyed by San Jose in Round One for the second year in a row” thing.) The Predators were actually atop the President’s Trophy race in March. They finished with the third best record in the league, and a furious late-season run by one of the two teams ahead of them (Detroit) was the only thing that kept them from the #1 seed in the West.

On top of that, the roster David Poile and company had painstakingly built for eight years was firing on all cylinders. Six Preds had at least twenty goals (I know! Scoring!) including Paul Kariya, whose 76-point total remains the team’s second-best scoring season ever. New additions J.P. Dumont and Jason Arnott aced their debuts (66 points for Dumont and a co-team-leading 27 goals for Arnott.) Peter Forsberg wound up being the team’s biggest name addition at the time. and even though Preds fans look at his tenure less fondly today, the Hall of Famer did add 15 points in his 17-game regular season stint. Long-time mainstays Kimmo Timonen and Tomas Vokoun both made the All-Star team, while the likes of David Legwand, Martin Erat, and Scott Hartnell were looking more like legitimate NHL stars with each passing day. Everything was going swimmingly.

I went back and forth with this one, mainly because so many of Poile’s little niche signings worked out WAY better than expected. But let’s face it, the Predators wouldn’t have even been in the 2008 had it not been for Dan Ellis.

Ellis, a career-AHL guy with the Stars, was brought to Nashville to back up Chris Mason, who appeared to be the Preds’ new number one after Vokoun’s departure. In his first start with the Preds, Ellis backstopped a 3-0 shutout (only his second NHL start.) After that, he slowly started getting more of the lion’s share of starts.

But Ellis’s legend really begins with a late March snowstorm. Ellis and Mason had struggled, and the team instead turned to their AHL starter (some guy named Pekka or whatever… not important) to get the start on March 22 against the Blackhawks. The aforementioned snowstorm delayed that Pekka guy’s callup, and Ellis was given another chance. Ellis made 37 saves, leading Nashville to a critical win. His next two starts were shutouts, and he very nearly got a third, but ultimately, his shutout streak ended in an 1-0 overtime loss to Detroit. At 233:39, that sequence is still the longest shutout streak in Predators history. Even with that OT loss though, Ellis finished the season 4-0-1, giving Nashville the boost needed to make it into the postseason.

In that postseason, Ellis was the primary reason the series against Detroit was even remotely close. He faced a whopping 240 shots in that six game series, coming away with a kudos-worthy .938 save percentage. His 52-save performance in Game Five at Joe Louis Arena is still the Preds’ record for most saves in a single game (yes, even more than Rinne had in those triple OT games.)

Ellis played two more seasons in Nashville, but didn’t come close to that level of success. After a rough start to the 2009 season, Ellis lost his starting job to that one Milwaukee snowstorm dude (no clue how he’s doing now), and lived out his Preds years as a backup before leaving for Tampa Bay at the end of the 2010 season.

Still, what a “hot goalie” run that wound up being.

Worst Move: Drafting Jonathan Blum in the first round of the NHL Draft

This is a tough one to judge. Obviously, many of the departures had a negative impact on the ice. However, most of them were out of the front office’s hands, a byproduct of the ownership turmoil. Because of that, it’s hard to put the blame on Poile for those.

Instead, the biggest glaring “didn’t work out” move was Blum, who the Predators took with the 23rd overall pick. Scouts thought Blum had a lot of upside as a puck-moving offensive blueliner. He showed glimpses of that potential in his first handful of years after the draft, including a 41-point first pro season in Milwaukee, and a successful debut stint in Nashville that cemented his roster spot for all 12 of the Preds’ playoff games.

But in the seasons that followed, Blum’s development slowed. His defensive skillset didn’t match up to his offensive upside, and as a result, was sent to Milwaukee for the rest of the 2012 season. Blum did make the roster for the lockout-shortened 2013 season, but by then, he had been passed on the depth chart by the likes of Roman Josi, Mattias Ekholm, and Ryan Ellis. The Predators didn’t offer Blum a qualifying offer the following offseason, and Blum moved on to Minnesota before continuing his career in Europe.

Mikael Granlund, David Perron, and Brendan Smith — all of whom are still in the NHL — were taken in the picks right after Blum. Plus, a young defenseman named P.K. Subban was still on the board as well.

Again, circumstances made this a tough offseason to grade, and made it an equally stressful Summer for Predators fans to endure.

Still, despite all the drama surrounding the team’s sale, Poile managed to piece together a fairly decent team. Bonk, Gelinas, and de Vries became solid depth pieces that contributed to the Predators’ playoff run, while Ortmeyer served his purpose as an extra forward who could add some checking power if needed. Even Antti Pihlstrom, who would wind up on the Preds’ permanent roster the next season, was an acceptable third-line winger in his lone full season.

The draft wasn’t one of Poile’s finest. However, it did produce Nick Spaling, a Smashville fan-favorite. Spaling’s quick skating, forechecking, and defensive prowess allowed him to cement a full-time spot on the team towards the end of the 2010 season. He developed into a reliable third-line center before being traded to Pittsburgh (along with Patric Hornqvist) in the James Neal deal. Ryan Thang (1 game in 2012) and Andreas Thuresson (25 games split between the ‘11 and ‘12 seasons) were the only other picks from the class to appear in an NHL game, and be honest, you don’t remember Ryan Thang.

In the context of everything that happened, the free agent haul wasn’t bad at all. The draft will unfortunately go down as one of Nashville’s worst, however, which takes the grade down to average.