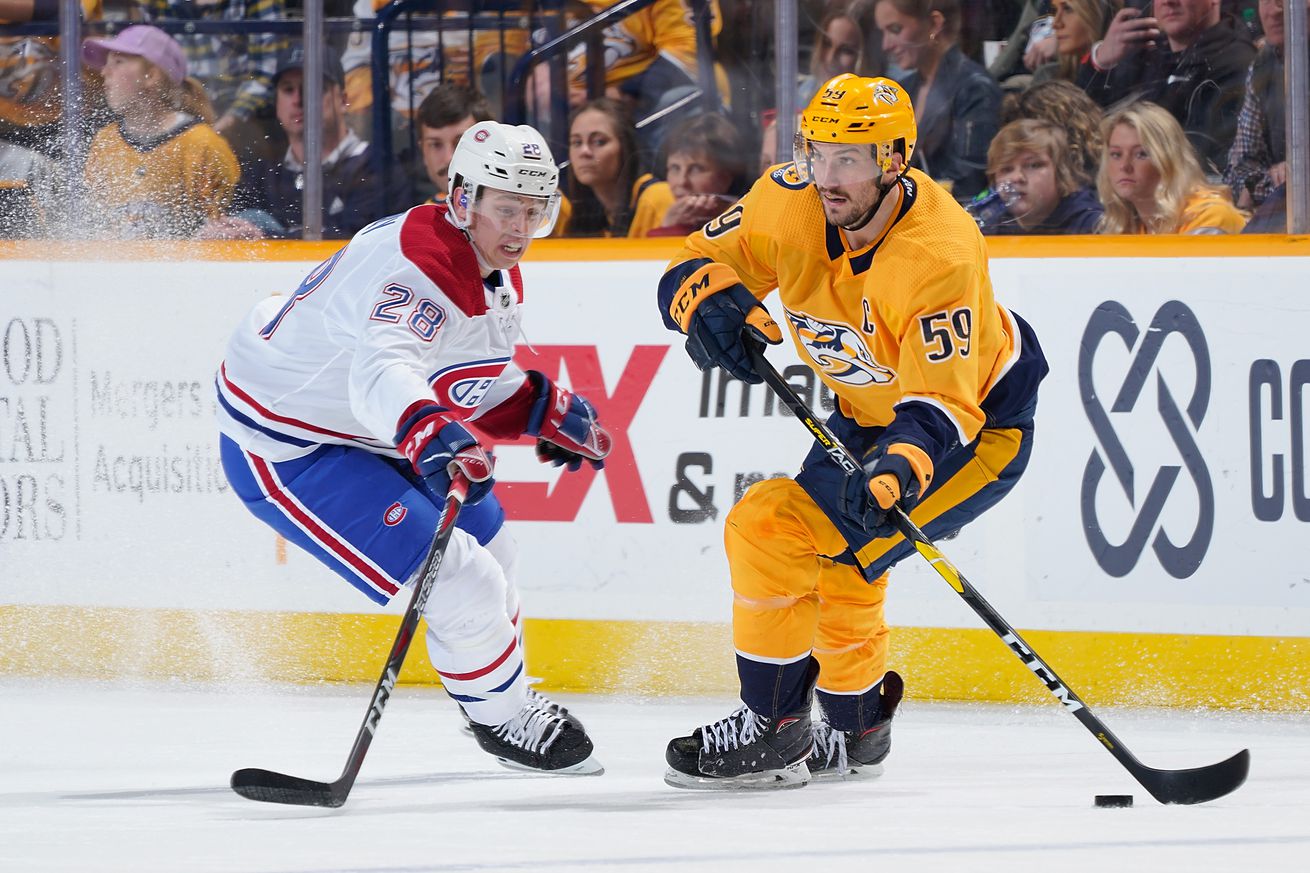 The Preds are in Montreal tonight.

After they swept the Stars in a home-and-home series, I’ve decided that I know nothing about these Predators. They continue to surprise me.

With Juuse Saros as the starter, we might see Pekka Rinne once on this road trip. Saros has been incredible in 2020, and as much as we hate to see it, he’s definitely the #1 right now.

With Filip Forsberg finally on the scoresheet again, it’s time to get Matt Duchene, Ryan Johansen, and Viktor Arvidsson back on track. Arvidsson has been looking like his usual pesky self, suggesting that his return from injury was likely a bit too fast. Duchene has hit more posts than seems fair. Johansen added a big goal against Dallas last week, but getting these guys back on track will be key for any kind of playoff run.

Jarred Tinordi remains in the lineup, likely paired with Korbinian Holzer. Tinordi was drafted 22nd overall in 2010 by Montreal, so there might be a bit of motivation in #24’s game tonight.

It seems like no matter how many points the Preds acquire, the Jets, Wild, Canucks, and Coyotes keep sneaking up on them. Two points tonight put the Predators closer to a wild card position, so get used to watching the standings like you used to watch for final grades to post in college. Remember to breathe.

I didn’t realize how many games Carey Price has played until I checked his stats. He’s been in 57 contests this year, posting a .909 Sv%. Price’s positivity levels depend on the mood of the fan base. He’s easily one of the best goalies in the world, but as the team goes, so does #31. His backup, Ryan Lindgren, has only been in 6 games. (Note: WOW.)

Our favorite Hab, Shea Weber, has had an incredible season for a so-called “aging” defender. He’s returned from some presumed serious injuries to post 36 points this season (15 goals, 21 assists).

Tomas Tatar, who is currently out of the lineup with an injury, leads the Canadiens in points with 61 points (22 goals, 39 assists). Phillip Danault has 47 points (13 goals, 34 assists), and Max Domi has 44 points (17 goals, 27 assists). Youngster Nick Suzuki has been fun to watch this season. He has 40 points (13 goals, 27 assists) in a breakout season with Montreal. One of my favorite Canadiens, Jesperi Kotkaniemi, was assigned to the Laval Rocket a few weeks ago to gain some confidence. He injured his spleen this weekend and has returned to Montreal, but his status is not known in terms of returning to the Canadiens lineup.

Montreal dropped games to Florida and Tampa Bay last week, so they’re going to be looking for a big win in front of their home crowd tonight.

– So many feelings during this game.

– Will Matt Duchene ever score again?

Tonight’s puck drop is at 6:00 Central. 102.5 The Game will have the radio call and FS-TN will have the broadcast. I’ll have coverage for OTF tonight.