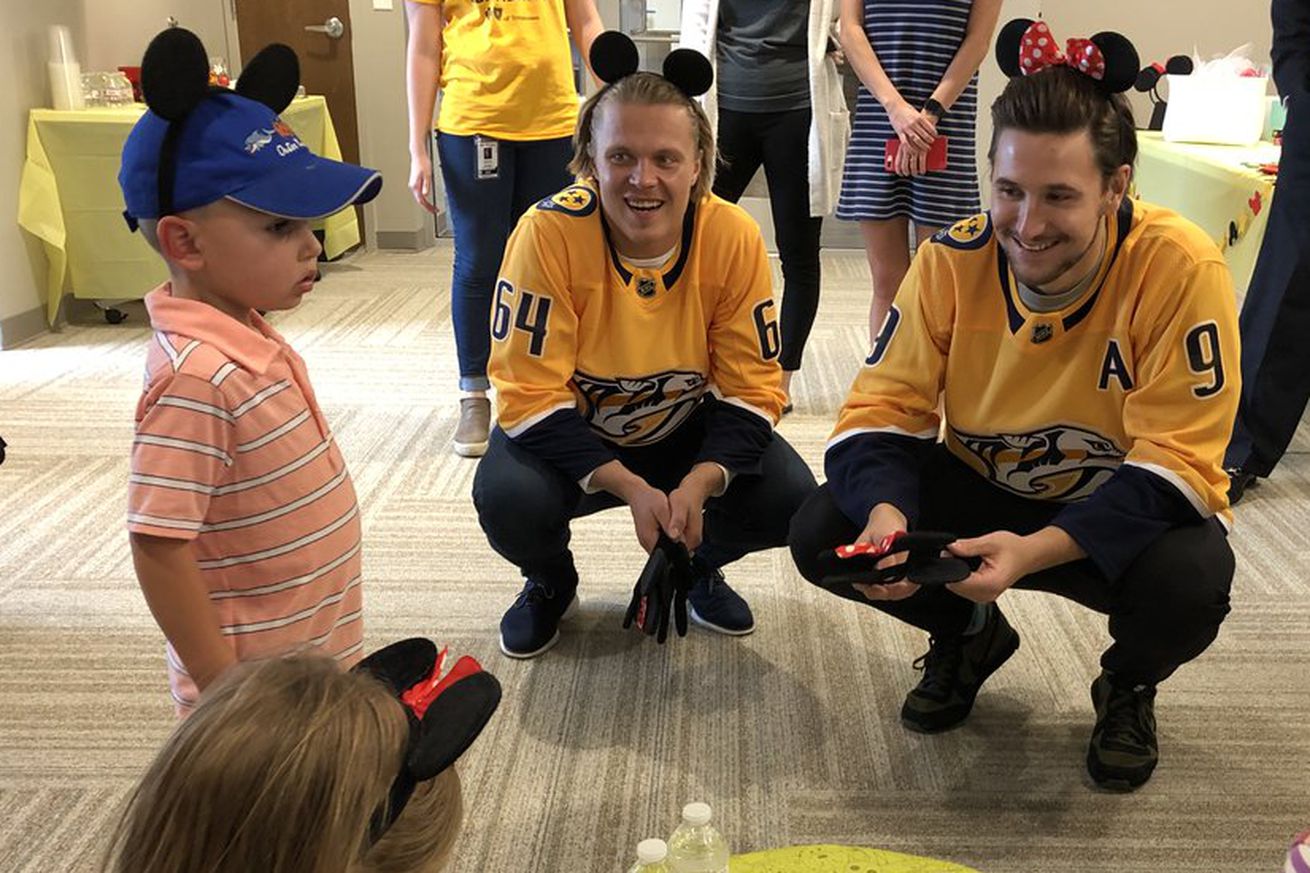 @PredsNHL and The Nashville Predators Foundation

Need something fun to discuss? Join our debate!

The NHL may be “on pause,” but the fine folks here at On The Forecheck are still committed to bringing you engaging content. And since the news of the day has been bleak, we want to bless your feeds and timelines with some fun discussion.

That’s why we’re starting a short series called “Off The Forecheck,” featuring rounds of intense debate on some topics NOT having to do with hockey.

Today, we’re going back to our childhoods (or adulthoods, we don’t judge), and giving you our picks for the best Disney songs of all time. For the sake of time, we’re limiting this to our top three. Nothing’s off limits here. These can be from movies — both new and old, soundtracks, sing-a-longs, whatever! As long as there’s a Disney link, it’s fair game.

Once you read our thoughts, chime in with yours.

I’ll go off the board for my #3 and go with “Be Prepared” from The Lion King. It’s the BEST. VILLAIN. SONG. EVER. PERIOD. And it perfectly sets up the intensity of the following stampede scene.

For #2, “You’ll Be In My Heart” from Tarzan, which — side hot take — may have the best top-to-bottom soundtrack of any Disney movie. Seriously, Phil Collins kills it, and this track is his non-“In The Air Tonight” magnum opus.

And the winner… I’m going to be called boring for this… but it’s “Circle of Life.” It’s always going to be “Circle of Life.” The intense opening immediately followed by the slow, building first verse, the iconic chorus leading the powerful bridge and outro. There’s a reason this is the most recognizable Disney song. This is the “Stairway To Heaven” of Disney music, and I won’t hear otherwise.

My top two come from “The Lion King.”

I was raised on the classics, so…

3. “Be Our Guest” from Beauty and the Beast

And you can’t forget our underwater friends:

4. “Under the Sea” from The Little Mermaid

3. What do Disney Animation Studios, Charles Dickens, and Billy Joel have in common? If you said they are the main ingredients in the third-best Disney song of all time, then you’d be right. Billy Joel, a rich man’s Huey Lewis, voiced the character “Dodger” in this Disney-fied retelling of Dickens’ Oliver Twist. That means he lends his voice (and songwriting talents) to the song “Why Should I Worry?” from Oliver & Company. The smooth, upbeat melody of this song, combined with the carefree message almost makes me forget not only the intense poverty of Dickens’s time, but also the the existential dread of yet another day on our slow march toward death.

2. This one is a little bit new, and even though it had some stiff competition from within the same movie, “Shiny” from Moana is the solid second-place finisher on my Disney songs list. First off, the songs lends itself incredibly well to the action during the scene in the movie. At the same time, it also stands up on its own when played without the visuals. It helps that Lin-Manuel Miranda, who is an excellent lyricist, wrote the words to the song, but the performance from Jemaine Clement takes it over the top. Let me say this, I am now aware that Clement is well-known from the cult hit “Flight of the Conchords”, but I was not at all aware of that when I first heard it, so you can’t say that’s the only reason I rate this song so highly. I think the song has the right mix of sinister intimidation and braggadocio (and a pinch of fun) to make this one you can listen to over and over again.

BONUS STORY: As promised above, here’s a bonus story. When we were discussing this article, Bryan told me nostalgia counted for nothing. But you know what? I don’t care what Bryan says. So, here’s a little nostalgia. Who else got to see Bambi in the theater? No, I’m not that old, but they used to re-release these oldies to the theaters when I was growing up. I remember watching Bambi in the theater and getting really fired up about the song “Little April Showers”. Not really sure why, it gets a little weird in the middle and the words aren’t that exciting. However, it’s tied to a memory…and in walks nostalgia.

It was my daughter’s first trip to Disney World. She was just under the three-year-old threshold (because she got in for free) and it started pouring rain as it is often wont to do. Many people decided to take refuge in stores, but we were already in line for the Prince Charming Regal Carousel…one of the few outdoor rides that continues running in the rain. So we decided to ride out the storm by riding the carousel. While we were enjoying the magic of the carousel, I noticed that the music the carousel was playing changed over to…you guessed it…“Little April Showers”. As we went around and around, still wet from waiting in line, it helped cement that precious memory in my mind. Now, every time I hear it, it takes me back to that day in the rain with my almost-three-year-old daughter.

Like many of you, I’ve got kids. Two young girls that are both in that stage where they lock in on something they like and that’s all they care about. Babies and toddlers like watching the same thing over and over again because it helps them understand and take everything in (there’s even a study).

So I feel uniquely qualified to offer an opinion due to frequent exposure making me hear new songs just as much as I heard the ones growing up, so I’m not clouded by nostalgia. Since I’m limited to three (I could write all day), I’ll try to vary my picks a bit.

1. “Friends On The Other Side” from The Princess and the Frog

This movie (and Tangled, like Shaun and Ann mentioned above) deserve way more respect in the pre-Frozen Disney catalog. Voiced by Keith David, Dr. Facilier is a fantastic villain who has an evil plan, supernatural debts to pay, and most of all, to put it in technical terms: swag. The New Orleans “Voodoo” style is turned all the way up, as he describes his entire plan in plain view, filled with double entendres and the promise of good things for the protagonists (more on that later). This movie might be, song-for-song, the Disney movie with the best overall soundtrack, and this song is the highlight.

This song was written by the great Randy Newman (of course) and was the first Disney movie to feature a villain with their own song since “Hellfire” in 1996 from the Hunchback of Notre Dame (which is a terrifying song in its own right). The visuals are incredible, and he sings with as much sinister intent as Scar in “Be Prepared.” However, there’s one main reason this song is an all-time great: it just SLAPS.

Disney’s hottest villain song is “Poor Unfortunate Souls”, and this song has everything. You have Ursula laying her plan out to naïve Ariel, gothic organs used in a Broadway-inspired burlesque number, an antagonist inspired by a famous drag queen (the one and only Divine), and Alan Menkin as one of the writers—who went so far as to record himself singing the song first.

Pat Carroll, who performed the voice of Ursula, said she based her performance on “a combination of Shakespearean actresses and car salesmen”, which I think is just fantastic. There’s so much expression in the performance that is perfectly portrayed by the hand-drawn animation style that defined the late 1980’s-90’s Disney animation era. Even her spoken parts are delivered perfectly (her delivery on “three” at 1:43 is my favorite).

3. “Everybody Wants to Be A Cat” from The Aristocats

This was hard to narrow down for the last spot. A lot of my favorite Disney songs fall into three categories: villain songs (the two above and “Be Prepared”), Disney “drinking” songs (“Gaston”, “I’ve Got A Dream”) and of course, the jazz-inspired. I’ve already mentioned The Princess and the Frog above, which was—appropriately—full of it (“When I’m Human”, “Almost There” and “Down In New Orleans”), but jazz filled the soundtracks of early Disney movies like The Jungle Book and The Aristocats.

Yes. This song (and by extension, the movie) has some REAL problematic moments—as a person of Asian descent, the Siamese cat stuff is lazily racist, but at least it’s nowhere near as “YIKES” as Mickey Rooney in Breakfast at Tiffany’s. However, the jazz-lover in me is just enamored with everything about it—the instrumentation, the integration of the harp-playing duchess, the catchiness of the song, and in my biggest nerd moment, when Phil Harris (also Baloo in The Jungle Book) sings “let’s take it to another key, modulate and wait for me” right after they, of course, modulate (change tonality) and change keys in the song. For a song that will be 50 years old in December, it’s still awesome.

Honorable mentions: “Gaston”, “I Wanna Be Like You”, “Lost In The Woods”, “Be Prepared”, “Part of Your World” (this is my go-to karaoke song for some reason) and “You’re Welcome”

Mulan’s soundtrack is killer as far as 90’s golden-age animated movies go. There weren’t many, but the ones they did choose for the movie were memorable. However, this isn’t about the movie’s soundtrack, nor is it really about the version in the movie. Lea Salonga’s Mulan sings a beautiful rendition, but I’m talking about the iconic Christina Aguilera version. The one that launched Christina Aguilera’s career. Yes! Her first ever single to showcase her powerhouse voice. That makes it the number one Disney song. All hail X-tina.

2. “A Whole New World” from Aladdin

A song synonymous with the mouse ears themselves. When you think Disney, you think “A Whole New World.” I’m clearly biased toward the 90s animated Disney movies and their soundtracks. They are, after all, the movies I grew up with, and I don’t know a single 90s girl who doesn’t know all of the words to this song. This was the epitome of romance and adventure to children who couldn’t truly understand the concept yet. If Jasmine’s beautiful singing voice sounds familiar, it’s because it’s also voiced by Lea Salonga.

3. “Part of Your World” from The Little Mermaid

“I want to be where the people are,” sang Ariel. “Yeah, us too,” cried nearly everyone right now. Look, quarantining is hard and I really feel the opening line to the song. This is not the reason I chose this song. This is yet another song that 90s girls grew up singing while they were pretending to be mermaids with long flowing hair. “Part of Your World” is one of the most beautifully sung Disney songs and is an anthem for young girls everywhere looking to live their Disney dreams.

Honorable mentions: “Colors of The Wind,” “Friend Like Me,” “Prince Ali,” “Kiss The Girl,” “Something There,” “Beauty and The Beast,” “I Wanna Be Like You,” “I Just Can’t Wait to Be King”