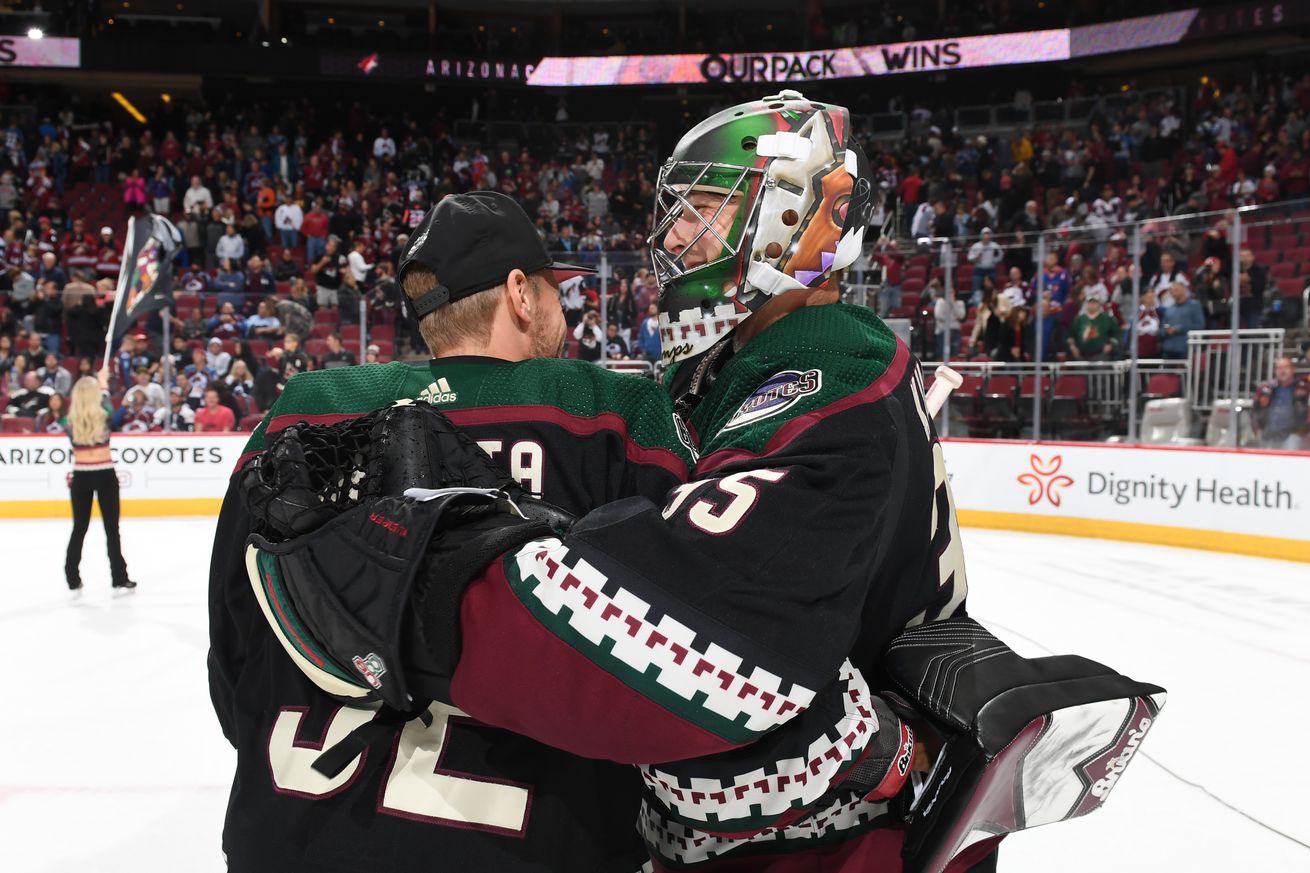 A goalie can’t quite singlehandedly win a game—though some have tried—but they can singlehandedly lose one. No position in hockey allows a player to have a greater individual impact on the outcome of one game—or three, or five. Or, in a full playoff series, seven.

The Arizona Coyotes have a top-notch tandem in Darcy Kuemper and Antti Raanta, both of whom are finally healthy heading into the postseason. If one of them struggles against the Predators, the other can be expected to step up and take over. It’s exaggerating very little to say that the Coyotes have two starters—according to the HockeyViz expected goals model both were top-ten players at 5v5 this season—and if Kuemper hadn’t been injured, who’s to say where the Coyotes would have finished in the standings?

First, the obvious: Kuemper was injured in mid-December and returned just before the season ended. He played four games between his return and the break, going 1-3-0 with a SV% of .924. Odds seem pretty good that he’s back in form.

“Form,” for 2019-20 Darcy Kuemper, was exceptional. Using Evolving-Hockey’s expected goals metric, Kuemper saved more five total goals above expectation—that is, better than a league-average goalie facing the same shots would have done—at 5v5, good for ninth in the league despite only playing half the season. At all situations, he jumps to second in the league, behind only the stupendous Connor Hellebuyck, again despite how much less time Kuemper had than the average starting goalie.

The Coyotes’ defense was fine but not great in front of Kuemper:

He faced fewer shots from immediately around the crease and in the low slot at 5v5, but saw a lot from the points. It’s possible that this gentler distribution of work helped him perform better on the shots he did face.

Kuemper’s injury pushed Antti Raanta further into the spotlight. He was twelfth in the league in terms of goals saved above expectation using Evolving-Hockey’s xG metric, though in Raanta’s case this was primarily due to exceptional shorthanded performance. His 5v5 play may have been less inspiring, clocking in at just about league-average by the same metric, though the HockeyViz model favored his performance much more highly.

Then again, he also faced a very different kind of in-zone play than Kuemper:

How much of this is due to the Coyotes’ play over the months that Kuemper was out, I can’t be completely sure. Still, the workload—including the workload immediately around Raanta’s crease—was much heavier, and for some goalies that’s a drain on their ability to stop any shot.

Where Raanta excelled this season was shorthanded. He had a .914 sv% on the penalty kill, and ranked fifth among NHL goalies in goals saved above expectation while shorthanded by Evolving-Hockey’s metric, allowing only a little more than two-thirds as many as a league-average goalie in his place might have.

Raanta, like Kuemper, had two shutouts and finished the season with a very respectable all-situations SV% of .921 and a still-decent GAA of 2.63. He looks to have rebounded well after a brutal 2018-19 season, but, also like Kuemper, has a disappointing win-loss record to show for it: 15-14-3.

The goaltenders are probably Arizona’s strongest players, but have been let down by their teammates. The Coyotes have struggled to score and give up more chances than they generate. If they lose in this series against the Predators, it will be in spite of their goaltending, not because of it.

Raanta spent years as second fiddle to Henrik Lundqvist, while Kuemper was loudly scorned by Minnesota Wild fans even when he was playing adequately and Devan Dubnyk wasn’t. Both of them blossomed on a bad Coyotes team, playing in a market that doesn’t get much coverage, in a city whose timezone makes local games air inconveniently late at night.

If the Predators struggle against the Coyotes’ goaltenders, the easy solution will be to blame the Preds’ offense. Maybe that will be a fair assessment—after all, last postseason the offense was bad and Ben Bishop was good. But I have faith that John Hynes and his team aren’t underestimating Kuemper and Raanta, and we as fans shouldn’t either.