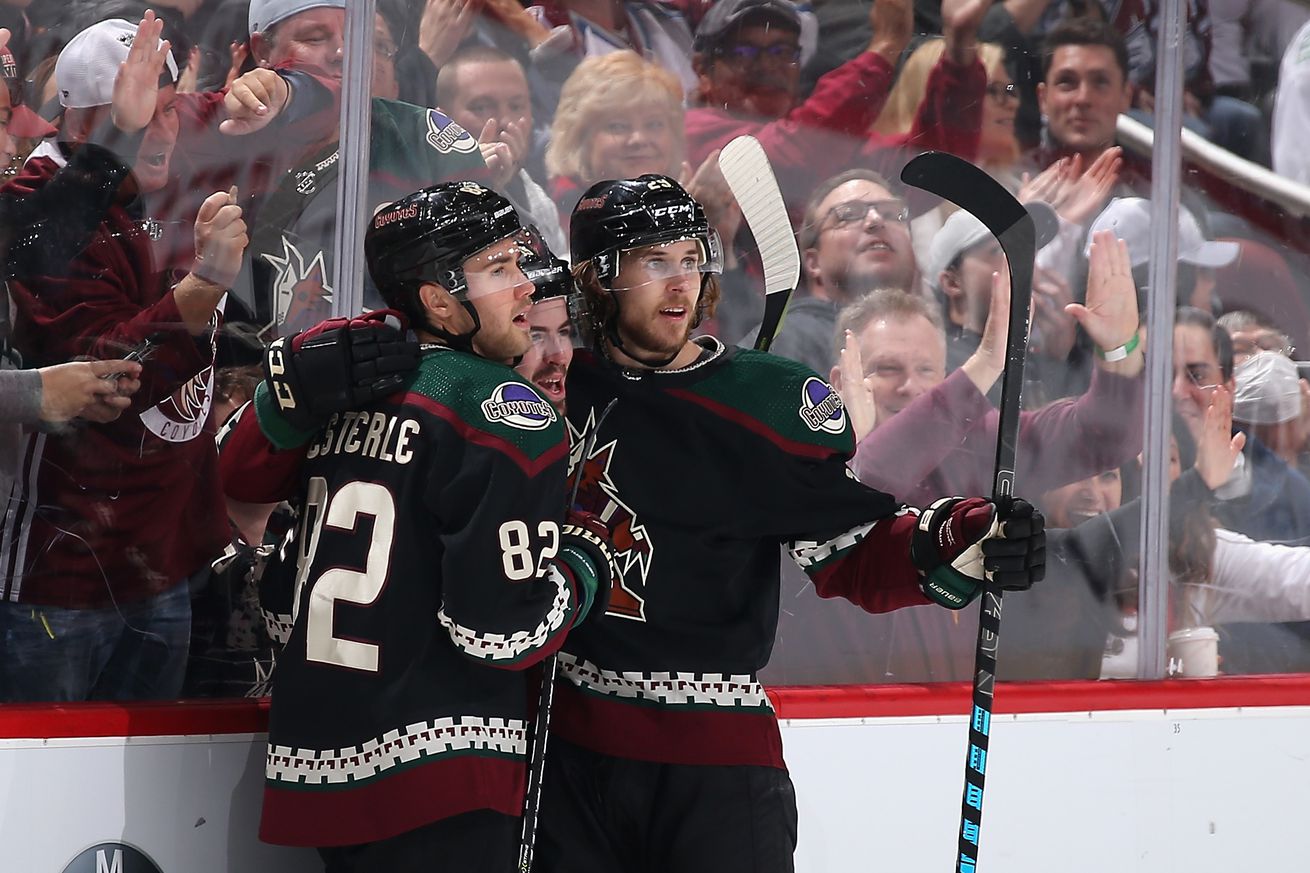 It’s time to take a look at what will likely be the two most crucial groups of players in this series.

We’ve got playoffs, coming, people, and it’s about time that we really talk about the matchup between our beloved boys in gold and their adversaries from the desert. Nick already wrote up a great preview of how the two teams’ forward corps compare here. However, I think anyone who watched the “delightful” games between these two teams knows that dynamic, offensive hockey isn’t exactly their forte.

The strength of both is pretty clearly the defensive game, and while the Coyotes emphasize their forwards getting heavily involved in shot, entry and chance prevention, their blue line is the crux of all of that. Today, we’ll be taking a look at how the Predators’ esteemed defensive unit matches up with a less talked-about but equally intriguing group in Glendale. Who do we feel has the edge here, in what way, and why? Read on to find out.

John Chayka made a lot of…questionable moves in his now-concluded time as general manager, with many of them directly contradicting his reputation as an “analytics GM.” However, he’s also made some pretty shrewd choices, and among the best of them was his decision to draft Jakob Chychrun 16th overall in the 2016 NHL Draft. Chychrun has rapidly developed into a play-driving, two-way defender at age 22, and is arguably the best skater on the team by his underlying numbers.

The young Canadian ranked in the 89th percentile in GAR and was second on the team in GAR, WAR and SPAR, behind only Christian Dvorak. Chychrun was effective in transition despite not being heavily used as a puck carrier, and especially excelled in Rick Tocchet’s hyper-defensive, opportunistic system. He’s a smooth skater and great support player, and while he won’t blow you away with flashy moves or absurd passing, he’s the type to always make the right play. He’s been an impact player all year, and he’ll continue to be one in the playoffs.

Lyubushkin might be one of the best-kept secrets in the NHL this year. He’s among the best players to take bottom pairing minutes in the league, and at just 26 years old he still has room to grow. Lyubushkin is a great positional player, grading out very well by xGA/60 and the eye test, and despite his modest point totals does a good job of supporting the forwards when on the ice with his solid CF/60 and high end xGF/60. He gives the Coyotes a decided edge in the fifth defender spot over Nashville’s horrendous Yannick Weber – Dan Hamhuis – Jarred Tinordi – Korbinian Holzer quartet.

For a Preds team that relied heavily on the third line all year to do the majority of the scoring and offense generation, it’s unfortunate that that line will be facing an excellent defensive defender in most of their minutes. Neutralizing or besting Lyubushkin will be crucial in this series, and will likely be indicative early of the adjustments that John Hynes has made to defeat Arizona’s scheme. Look to see how Grimaldi, Bonino, Smith, and the rest of the bottom six fare against the underrated Russian; it could decide the outcome of the play-in round.

We all know that Ellis was elite this season, but I think that sometimes even Nashville fans don’t understand how ridiculously good he was. Ellis finished third among all skaters in GAR in just 49 games played! That’s incredible, and so were his underlying numbers. By analytical impact alone, Ellis was probably the best defender in the NHL this year, and his absence was clearly hugely impactful, as we all saw. When Ellis went to the injured reserve, the defense fell apart and the team was mostly buoyed by the efforts of Roman Josi and a red-hot Juuse Saros.

Ellis and Josi will obviously be two of the four key players for this Nashville team (the others being Filip Forsberg and whoever the starting goaltender is), and it’s fair for fans to expect a dominant playoff series out of #4 following a fairly quiet 2018-19 postseason.

This has been the best season of Ellis’s productive career, and it’s a shame that the team was robbed of having a top pairing of two Norris-caliber defenders for the whole season. What’s important is that they do get that in the postseason: Ellis is decidedly better than any defender on Arizona’s roster in every conceivable way, and is arguably better than any skater the Coyotes have.

He’s the best defender in the league, the captain of this team, and the most dynamic and incredible player that Preds fans have had the pleasure to watch since Paul Kariya. Roman Josi is having a one-of-a-kind season in Nashville that stands alone even among the great ones we’ve seen from blueliners in the past (yes, even including Shea Weber, Kimmo Timonen, and Ryan Suter’s peaks; Josi has been that good this year). Let’s have a brief look at how absolutely stupid his output was this season.

Josi ranked 10th, 11th, and 10th in GAR, SPAR, and WAR this season among skaters. He was second among all defenders in points, only behind everyone’s favorite dollar-store brand Brent Burns (AKA John Carlson). Josi was especially bonkers by transition numbers.

That’s every defender in the NHL, charted by their ability in transition. That lonely logo in the top right is Josi, who had almost double the carries/60 of any other defender and still ranked third in success rate. That’s in a totally different stratosphere than anyone else, and it’s what makes him such an important cog on this team.

Josi will be the main player that the Preds can use to overwhelm Arizona. The Coyotes have always halted Nashville’s attack by applying heavy pressure in the neutral zone to forwards, frustrating the transition game. If Josi puts the exit/entry responsibilities on his back, he’s capable of carrying Nashville past Arizona’s pressure and establishing solid possession in the other end. Expect the captain to step up and have the puck on his stick as often as possible.

The Coyotes are at a clear disadvantage when it comes to top-end talent, but the comparison between these two units is smaller than you’d think. While Nashville’s core three of Josi, Ellis, and Mattias Ekholm have mostly lived up to their billing, you’ll notice I didn’t include Ekholm in my “guys to watch” section. That’s mostly because he’s been largely hindered by awful or incompatible partners all season, a trend we’ll likely see continue in this series.

While Arizona only has one truly good top-4 defender in Chychrun, the underperforming trio of Jason Demers, Alex Goligoski, and Oliver Ekman-Larsson at least fills out the top four with NHL-level players. The bottom pairing featuring one of a now-healthy Niklas Hjalmarsson or Demers with Lyubushkin is infinitely better than the Holzer-Tinordi pair that Nashville will likely ice, and I’d argue that the Coyotes hold a massive advantage at the 4D spot over Dante Fabbro, who has been pretty poor to mediocre this season.

I still have to give Nashville the edge here by a decent amount because they have too much talent and a pair of absolutely game-changing defenders, but it’s closer than we’d like it to be. This will likely be a defensive series defined by how well the goalies play, but if Arizona’s depth and aggregate ability bested Nashville’s electric blue line, it wouldn’t totally bewilder me.

Ekman-Larsson hasn’t been good for a minute now (he’s basically an under-the-radar Drew Doughty in terms of both his contract and his rapid decline), but he’s still a talented player capable of elite flashes. Goligoski didn’t have great underlying numbers, but he produced decently enough. Demers is… bad, but he could play well in a reduced role with the return of Hjalmarsson. Hjalmarsson himself isn’t what he once was, but he also hasn’t been fully healthy for a while, so he could look a bit refreshed.

In the end, I feel that Nashville has a better back line than Arizona, but the matchup between these two groups will be one to keep an eye on. It will likely be the most determining factor in the series besides goaltending, which, as we know, is basically voodoo.