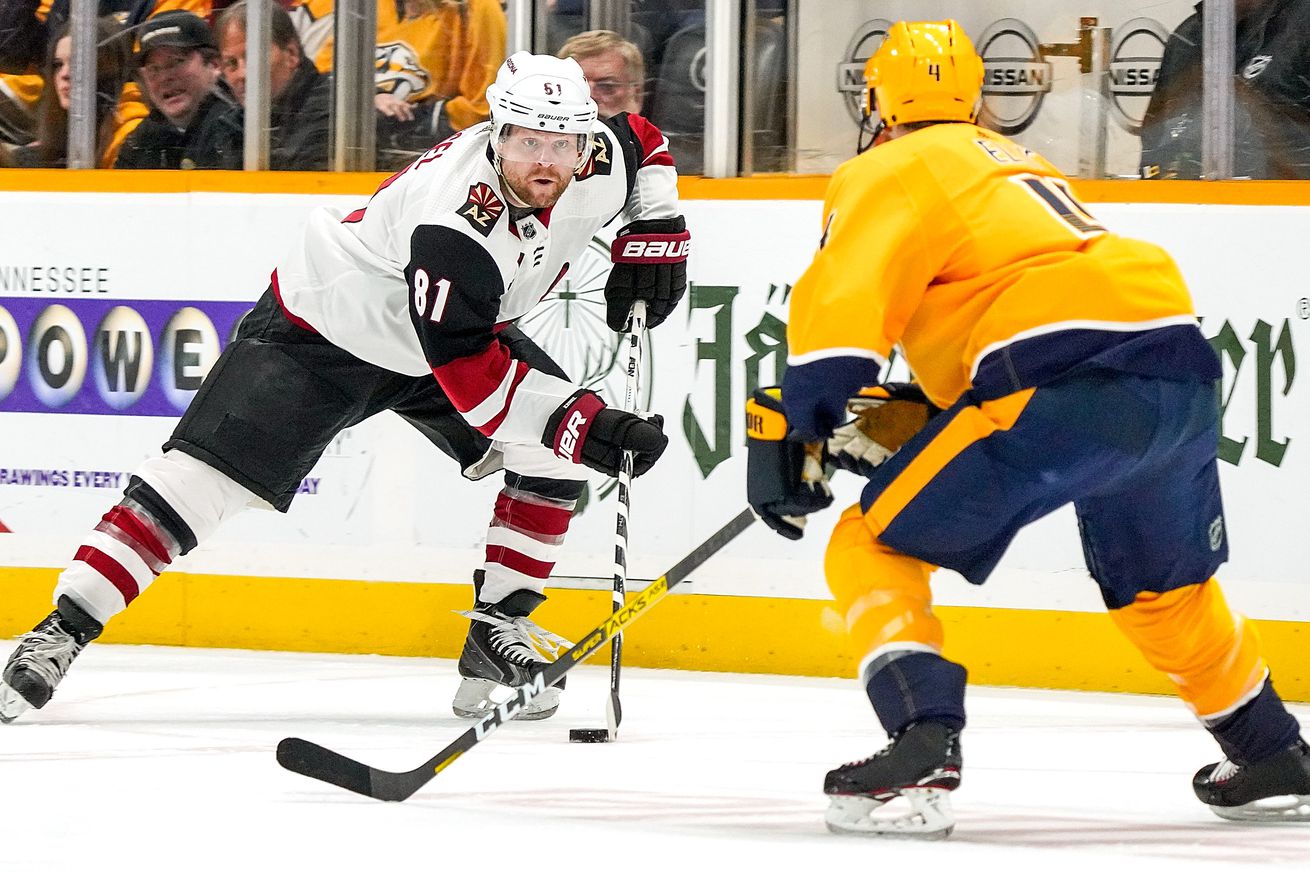 Breaking down the Arizona Coyotes, position by position. Today, their power play.

If you have followed the Nashville Predators over the past few seasons, it is well established that special teams are a weakness of the current core. The penalty kill used to work like clockwork, but now it feels that the penalty kill is a broken clock that only works twice a day. As for the power play, the last time the Predators completed a season with a top-10 power play was in the 2015-16 season with Shea Weber still on the point.

While Arizona’s power play is not remarkable either—they finished 18th overall with a 19.2% conversion rate, 1.9% higher than the Predators—they boast a top-five penalty kill. While one out of every four Predators penalties resulted in a goal for the other team, the Coyotes stifled opponents with an 82.7% success rate. With an excellent penalty kill going up against the Predators’ very poor power play, the Coyotes should fancy their chances in winning the special teams battle.

Nonetheless, different tactics result in different results. The Predators’ power play could be successful against different systems, and vice-versa with the Arizona Coyotes’ power play. How will this all shake out? Let’s look at the X’s and O’s.

People mistakenly think offense begins when a team enters the offensive zone; the truth is that offense begins when a team first gains possession of the puck. The Coyotes’ power play embodies that notion because they love scoring off the rush, and simply evaluating the team for their work in the offensive zone provides a horribly incomplete picture of their power play’s mechanics. Look at this goal they scored against the Predators earlier this season:

Just looking at the shot location, one would say that the power play drove into the slot and scored—which is true, but fails to show the setup. Therefore, to look at the Coyotes’ power play, let’s start at the beginning.

In a double late breakout, the defender who originally corrals the puck skates it out from behind the net while the other defender and a forward (or two forwards, if using four forwards and one defender on the power play) skate back on opposite sides of the ice. Once reaching the faceoff dots, they swing around and come out of their turns, generating great speed with open ice. The original defender carrying the puck should be further up the ice than the forwards, with the option to drop the puck back to either of the forwards, who have built up incredible speed.

Now, the Coyotes have an excellent weapon for this breakout—Phil Kessel. While Kessel is not the best skater in the league when it comes to agility and acceleration, his top speed is elite. This breakout gives Phil Kessel, who is always one of the two skaters looping back, the time and space needed for him to reach top speed. It’s incredibly hard for a defender to play up on a forward coming with as much speed as Kessel, especially in this system. It enables him to catch defenders on their heels as he blazes past them.

Of course, the Predators cannot allow this to happen. The easy way to prevent this is to be aggressive and stick a forward right in front of the Arizona net. This prevents the defender carrying the puck out from having free choice of where to go, as the penalty killer can force the defender to whichever side of the ice he prefers.

The only challenge to this is that the Predators cannot dump the puck and change all four members of their penalty kill at once. If they want to prevent Phil Kessel from rushing at them full-speed, they need to change three skaters and leave one out there to go deep and pressure the puck-carrying defender. It’s easier said than done—if the Predators are trapped in their defensive zone for a long time, exhausting the penalty killers, temptation for all four Predators to change at once could easily win out. Nonetheless, the Predators must be overly vigilant in attacking the Coyotes breakout because of the threat and success that the Coyotes have enjoyed stemming from their double late breakout.

Again, the Arizona Coyotes’ breakout goal is ultimately to enter the offensive zone with both speed and possession. The way they accomplish this is by freezing opponents and putting them on their heels. Many defensive systems focus on holding the blue line but, against the Coyotes, doing so instead gives them the time and space to blow by defenders on the blue line.

The Predators penalty killers cannot sit on their heels against the Coyotes. They need to either aggressively attack them in the neutral zone, or forfeit it to gain favorable positioning in their own defensive zone.

Interestingly enough, the Coyotes run a power play system that could have run into serious trouble against Peter Laviolette’s systems. However, with John Hynes instituting strict, disciplined formations, we can expect things to play out much differently.

The Coyotes use an overload system. Most overload systems have one player below the goal line, one low on one side of the boards, one player in front of the net, and then two defenders up at the blue line. If a line were drawn connecting each player, nearly the entirety of either the left or right side of the offensive zone would be covered, while the other half would be empty.

This system gives teams a lot of options. A common play is operating a give-and-go between the player on the boards and the player below the goal line. The defenders both need to have hard shots, but more importantly they need good puck-handling skills. Of course, the player in front of the net is there to net as many garbage goals as possible.

While it’s important with any system, it is imperative in the overload to be constantly moving. The moment an opponent is sucked in to the player with the puck, passing lanes are open. If an opponent is being sucked in to the puck-handler while rotating with a teammate, a quick drop pass can easily result in a lopsided 4 on 3 or a dynamite give-and-go scoring opportunity.

Now, the Coyotes absolutely love taking a certain risky pass on the power play. Often, the Coyotes will look to pass from the corner or below the goal line to the opposite defender, throwing the puck right through the slot. This pass, if an opponent plays aggressively, can be picked off and result in a breakaway for the penalty killers. Under Peter Laviolette, such a pass would be a prime opportunity for Viktor Arvidsson to pinch, intercept the pass, and earn a breakaway. However, under John Hynes, the Predators play a much more disciplined box system. This could instead result in the Coyotes being persuaded against this pass but, if the opportunity arises, it can be particularly lethal.

The objective behind this pass and why it’s so dangerous is twofold. First, it catches the penalty killers—and goaltender—out of rotation, giving the puck-receiving defender both time and space to take a dangerous shot. Second, the Coyotes have very clever and intelligent players manning the points on their power play.

While Oliver Ekman-Larsson is a known star, Jakob Chychrun may be the shrewdest point man in the league when it comes to the power play. Like an ace pitcher in Major League Baseball, Chychrun doesn’t simply generate his success from a blazing fast shot. Instead, he has one of the best off-speed shots in the league, using it to masterfully set up his teammates. That doesn’t mean he can’t score on his own—he’s more than capable of doing so. However, when Chychrun has the puck, defenders have to be especially aware of Arizona’s other moving parts.

It’s really a coach’s dream how Jakob Chychrun selects his shots on the point. His ability to read a play and not blindly fire a full-speed shot into traffic is an asset that the Predators desperately need. Chychrun’s head is constantly on a swivel, finding forwards to redirect his shots—which he’ll slow down to make them easier to re-direct—or reading the angles on a goaltender to get his forwards juicy rebound opportunities. He’s the brains behind Arizona’s power play. Jakob Chychrun doesn’t necessarily try to score—he tries to find the best scoring opportunity. Neutralizing Chychrun is going to be a key objective for the Predators’ penalty kill.

Another interesting point is that the Coyotes won’t necessarily create traffic in front of the net. They jump in at the perfect, opportune time. See this clip from a Phil Kessel goal above:

On one hand, this plays in the Predators’ favor. The Predators do a subpar job at clearing traffic in front of the net. Mattias Ekholm and Dante Fabbro have both at times this season been caught losing track of their man, a problem normally reserved for a combination of Yannick Weber, Matt Irwin, and Jarred Tinordi. The Coyotes don’t rely on a backdoor threat. Therefore, in a way, the Predators could see a more successful penalty kill because their biggest weakness, the backdoor play, is not a key element of the Coyotes’ power play toolkit.

The Predators have two key objectives when on the penalty kill: slowing down Phil Kessel or at least forcing him outside on the breakout, and neutralizing Jakob Chychrun once the Coyotes gain the offensive zone. Doing so is easier said than done but, if they are able to accomplish both of those objectives, they can find success on the penalty kill.

Check back soon for part 2 of our special teams preview, evaluating the Coyotes’ penalty kill.