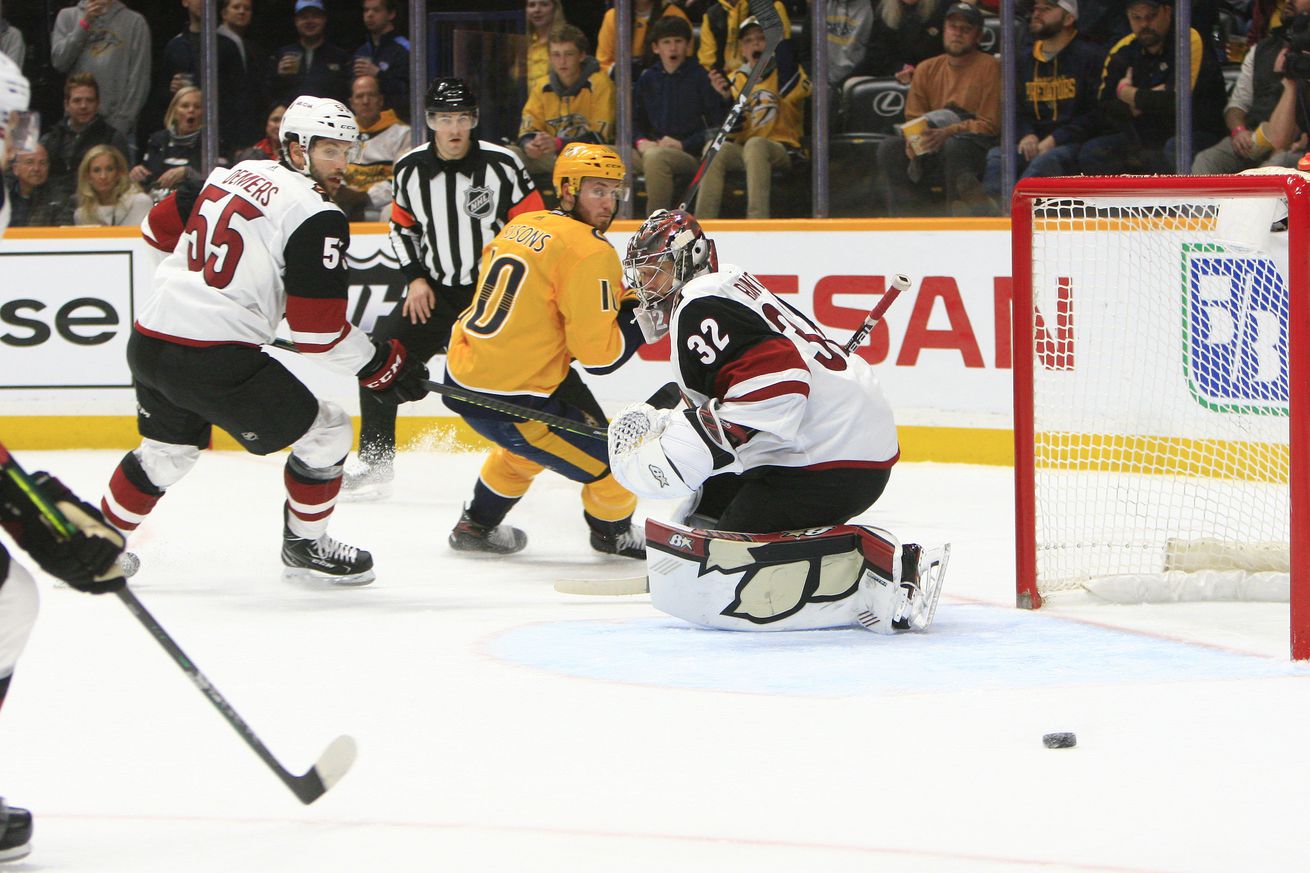 Breaking down the Arizona Coyotes, position by position. Today, their penalty kill.

In part 1 of our special teams preview, we looked at the Coyotes’ power play. Today, we’re looking at their penalty kill, which finished fifth in the NHL. Considering the lack of success that the Predators found on the power play this season, facing such a tough penalty kill is not a great matchup for them.

Nonetheless, if the Predators want to win this series, they are going to need power play goals. Special teams come under a microscope in the playoffs. With games being played as tightly as they are, any opportunity to score needs to be converted. What exactly is the Predators’ power play going up against this series?

The Arizona Coyotes keep things simple when forechecking and defending the neutral zone while shorthanded. The Coyotes run a passive 1-3 penalty kill, with one forward hanging high in the offensive zone while the other three skaters sag back in the neutral zone. The second forward defends the red line, while the two defenders hang back on the Coyotes’ own blue line.

The strategy behind this is to pinch opponents and force them into dumping the puck. By keeping the first forward high in the offensive zone, the Coyotes are not looking to put pressure on the opposing breakout, but rather dictate in what direction the opponent takes the puck into the neutral zone. Once the neutral zone is reached, the second forward activates and attempts to squeeze the space of whichever opposing skater is taking the puck. In taking away space, the second forward is ideally directing the puck carrier right into one of his defenders on the blue line, forcing him to dump the puck.

The Predators need to be decisive and take the initiative against such a penalty kill. As you can see in the clip below, some smart passing in the breakout can neutralize the first forward deployed by the Coyotes, giving the puck carrier open ice and making the second forward’s job difficult.

Skating the puck down the ice is a challenge against this system because it does a good job at converting offensive zone attacks into dump-ins. This means that the strategy of having Viktor Arvidsson just skate it through the neutral zone is ill-advised. The Predators will have a much easier time getting clean zone entries with smart passing to avoid Arizona pinching them along the boards.

Arizona’s defensive zone structure is intriguing as, depending on the location of the puck, they rotate fluidly between a box and a diamond.

In the box penalty kill system, all four defenders should be positioned at the corners of a box if one were to connect them with lines.

The goal of the box is to shut down the middle of the ice. It doesn’t really matter if the other team has the puck on the perimeter, as that means that they likely aren’t getting quality scoring chances. If an opponent isn’t in a good scoring position with the puck, there is no reason to chase them from their current post. That said, it’s not an aggressive, turnover-producing system, so the team on the power play likely can possess the puck for long lengths of time.

Meanwhile, the diamond also looks just as one would expect. One penalty-killer is attempting to cut off the puck from the attacker quarterbacking the play from the center of the blue line, while two others try to deny shots from the players up by the top of the circles who are looking for one-timers.

The glaring flaw with the diamond is with the penalty-killer trying to disrupt the centered blue line attacker. If that attacker is able to get a shot past that penalty-killer, the attacking team has a two on one advantage down in front of the net. Nevertheless, despite its clear drawback, some teams choose to run this system.

The Coyotes typically remain in a box formation. However, their play can be characterized by extreme aggression. Every penalty killer in the box challenges the opposition when the puck comes remotely near them. For how passively the Coyotes treat the neutral zone, they enter a frenzy when the puck enters their defensive zone.

In a way, this makes sense. The Coyotes’ goal on the forecheck and in the neutral zone is to deny space. Once their defensive zone is breached, they have the same goal. The difference is, to achieve a denial of space in their own zone, they have to challenge opponents.

It also makes sense, considering their aggression, that the Coyotes challenge the opposing blueliners by switching to a diamond formation when an opposing blueliner receives the puck. They always want to be hounding opponents. However, in transitioning from a box to a diamond and then back to a box, they open up a window of opportunity for opponents.

When the Coyotes transition to a diamond, they seem to expect a shot. We know this because, as in the Gaudreau goal above, they leave themselves incredibly stretched and exposed. This opens an opportunity, but only for a brief window of time. Trigger-happy teams like the Predators who are more likely to immediately shoot the puck play right into the diamond. If, instead of shooting the puck, the Predators were to rotate it to the other side of the ice, the whole upper slot opens up. All it takes is for a forward to jump into the gap, and all hell breaks loose for the Arizona penalty kill.

This is easier said than done. The Coyotes do a phenomenal job exerting pressure and, more often than not, make opponents play the puck without patience and poise. Just as a patient team that does not force the puck straight through the neutral zone will find success entering the offensive zone against Arizona’s penalty kill, a patient team will let Arizona’s penalty kill overexpose themselves.

The Predators’ power play does not exhibit the qualities needed to take advantage of Arizona’s penalty kill. The Predators attempt to brute force the puck through the neutral zone and seem to value a high volume of shots rather than waiting for better scoring opportunities. This has changed a little under Hynes in favor of high-quality shots, but old habits die hard. The Predators’ defense is more than capable of taking charge and passing the puck through the neutral zone, but their trigger-happy nature raises serious doubts regarding their ability to remain posed and wait for Arizona to transition from a diamond to a box in the offensive zone.