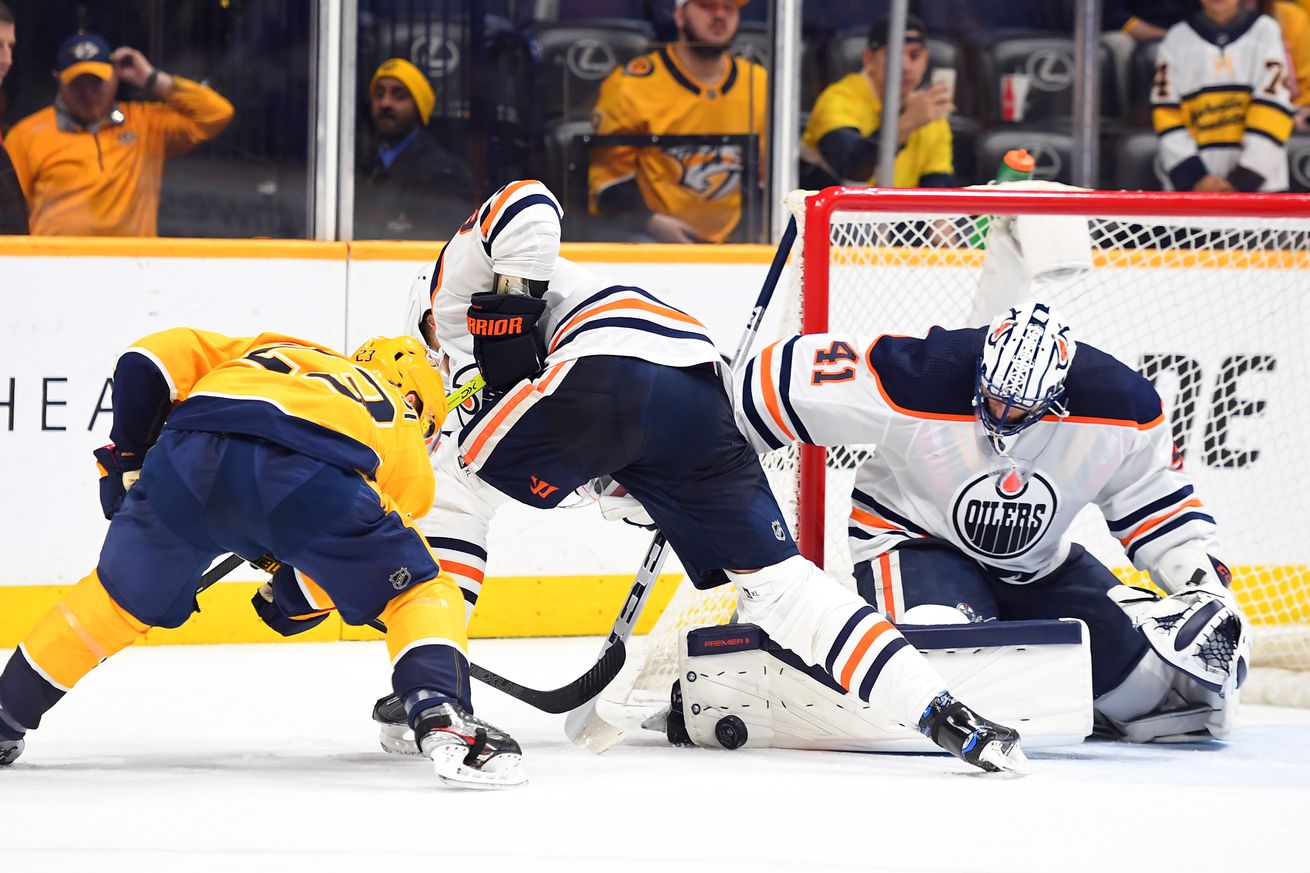 I know that’s a misquote, but you think I’m going to correctly quote the Scottish play? Here? Now?

Five stats-based predictions for the 2020 Stanley Cup Playoffs | Sportsnet.ca
Andrew Berkshire has some nice things to say about Pekka Rinne, which…well, I like reading nice things about Pekka Rinne. I don’t know how well this fits with what Shaun’s been seeing at camp, but I’ll take what I can get for now.

Predators vs. Coyotes Preview: A Look at the Coyotes Forwards | On the Forecheck
Also ICYMI, Nick kicks off our Preds-Coyotes series preview with this breakdown of what the Coyotes have up front. Coverage will continue next week.

Coyotes banking on two goalies when season resumes | ProHockeyTalk | NBC Sports
Spoiler for next week’s coverage here at On the Forecheck: they’re both good. Stay tuned for my preview of Darcy Kuemper and Antti Raanta, a Q&A with Five for Howling in which they’ll probably come up, and hopefully a Q&A with a special guest (no, it’s not anyone in any way affiliated with the Coyotes org itself).

Growing sense GM John Chayka and Coyotes are headed for divorce | Sportsnet.ca
Chayka has not accomplished very much with the Coyotes. It’s true they’ve had a huge problem with injuries, and some of that is outside his control, but looking at the last few years…oof. With the looming realignment, and a lot of people–none as far as I know in the NHL itself–talking about moving the Coyotes east as the team gets added to the Central, it feels like the pressure is on.

The prevalence and growth of women’s hockey across the globe | The Ice Garden
Iceland loves women’s hockey; the game is growing rapidly in Asia and parts of Eastern Europe; and more.

Blackhawks’ Corey Crawford on 31-player list for playoff roster | Sportsnet.ca
This is great news for the Blackhawks, if Crawford is actually improving and it’s not a bluff. I do hope he is doing okay–anyone with a concussion history like Crawford’s is worrying when they’re not available and it’s not clearly stated to be a lower-body injury, and between that and the pandemic…lot of bad options.

It’s not great news for the Oilers, or for people who like joy in the NHL, if he’s able to play at his usual level, but meh. It’s been a rough year. I’d much rather hope for people’s health.

Pending free agents confront injury risk in NHL playoffs | ProHockeyTalk | NBC Sports
I mean, yes, but the only real difference between this and any other season is that they’re actually being given the choice to opt out without getting penalized for it. NHLers don’t get paid for the playoffs–that’s why there’s no salary cap. In a regular 2020, Alex Pietrangelo and Braden Holtby would have already played as much of the postseason as their teams were around for and never questioned it out loud. If it’s risky to pending free agents in 2020–which it is–it’s every bit as risky to pending free agents in any other year.

Do I expect this to change the NHL’s perspective? No.

Racial Bias in Drafting and Development: The NHL’s Black Quarterback Problem | Hockey Graphs
The NHL is really, really white. yolo_pinyato’s article is a detailed look at where everyone else is falling out–or being driven out–of the picture.

NHL officials acknowledge long road to successful resumption | ProHockeyTalk | NBC Sports
The NHL’s CMO says that none of the NHL’s testing procedure–the tests themselves and the processing–is taking away from the tests being administered to people who aren’t involved in professional sports. I’m very doubtful, but I’d like to believe it.

NHL shows off plans for Edmonton, Toronto Return to Play bubbles | ProHockeyTalk | NBC Sports
It sounds like the NHL is trying to make everything as normal as possible. Movie theatres? Food trucks? That’s…an interesting bubble. Very sci-fi city-on-another-planet vibe, except the problem the NHL is facing isn’t that it’s vacuum or a non-oxygenated atmosphere outside the bubble.

Trio of Whale players host Summer Skills clinics for girls | The Ice Garden
This would be a cute and fun story but I’m distracted by my horror at not seeing any masks in the photos. Hopefully everyone involved stays safe and healthy.

Brent Seabrook won’t return for Blackhawks at 2020 Stanley Cup Qualifiers | ProHockeyTalk | NBC Sports
*gazes into crystal ball* Mr. Seabrook, I’m seeing…that you shouldn’t accept any apples from a strange old woman who comes to your cottage in the woods…

Canucks fine-tuning lethal power play, a potential playoff game changer | Sportsnet.ca
I read the headline and did this: