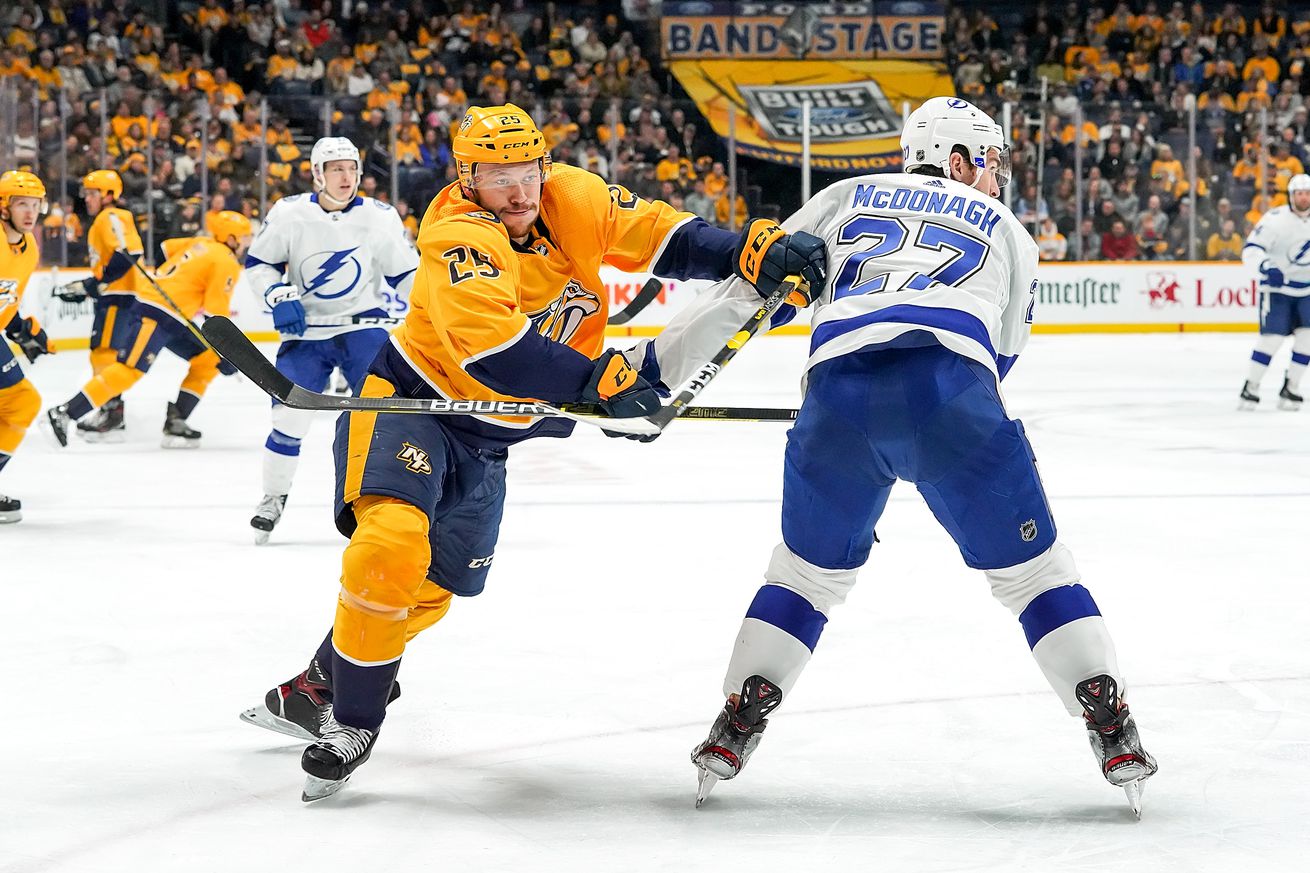 With the NHL draft and free agency both approaching, we wait to see whether it’ll be a noisy week for the Preds.

We had a lot of great content yesterday, including our mock draft piece in the evening, so if you missed checking the home page yesterday go take a look now. (Apologies for the lack of links yesterday. I didn’t realize they hadn’t run until we’d already had three other articles go out, and at that point it just seemed silly.)

Insider Trading: NHL questions Tampa Bay Lightning about controversial Stanley Cup rally | TSN.ca
Yeah, it, uh, it wasn’t great. Over two hundred thousand Americans alone have died from a virus we still don’t have a vaccine or a guaranteed treatment for, and they’ve got…that parade going on? They’ve got random people drinking from the Cup? Really???

Oilers’ Ken Holland has ‘some optimism’ Jesse Puljujarvi will return | Sportsnet.ca
Well, optimism is always a good thing to have, I guess…

Top NHL RFAs to watch, including Islanders Barzal, Cirelli of Lightning | ProHockeyTalk | NBC Sports
Is this going to be the year the Lightning finally don’t manage to juggle their cap problems? …eh, if it is, I think their management and fans will survive. Banners, as they say, fly forever.

The Toronto Six have a home rink | The Ice Garden
Exciting news for the Six (and the other fourteen and counting).

Vegas Golden Knights debut new gold alternates, the first all-metallic gold jersey in NHL history | Russian Machine Never Breaks
I cannot even begin to tell you how excited I am that now whenever someone goes “ew the Preds’ jerseys are so YELLOW that’s not how SPORTS WORK” we can just aim ’em at Vegas, sit back, and relax.

The story behind Vegas’ new and unique ‘metallic gold’ third jersey | Sportsnet.ca
I hadn’t really thought about the technical aspects of getting a sparkly metallic fabric as a functional sports uniform until this article. I wish they’d gone a little more into detail about the process and the failures–in an article called “the story behind”–than the players’ enthusiasm, but sure.

(According to my counterpart at Five for Howling, he’s been playing at less than full health for a while. He also has a huge contract. Bad combination in any trade target, even if the trade target and his head coach have apparently had clashing styles.)

Madison Packer embarks on new journey in season six | The Ice Garden
There’s a lot of fun stuff in this combination bio and interview, but one of the things that jumped out at me was Metropolitan Riveters forward Packer talking about how hard it is to get people to come to the New York market. Packer is enthusiastic about the increasing NWHL revenue, but I do wonder whether a better-funded NWHL could, you know, make one of the most expensive cities in the country to live in a more attractive place for free agents in the NWHL, like it sure is for college kids entering the NHL.

Treliving predicts uncertainty may restrict unique off-season trade market | Sportsnet.ca
The Flames‘ GM is probably right–we’re likely looking at an extended trade and even free agency season, as GMs try to figure out what to do with the flat salary cap and the upcoming expansion draft, and with no clear set start date for the NHL season to spur everyone on.

Hurricanes in contract extension talks with Andrei Svechnikov | ProHockeyTalk | NBC Sports
I wonder if Marc Bergevin will help them out again.