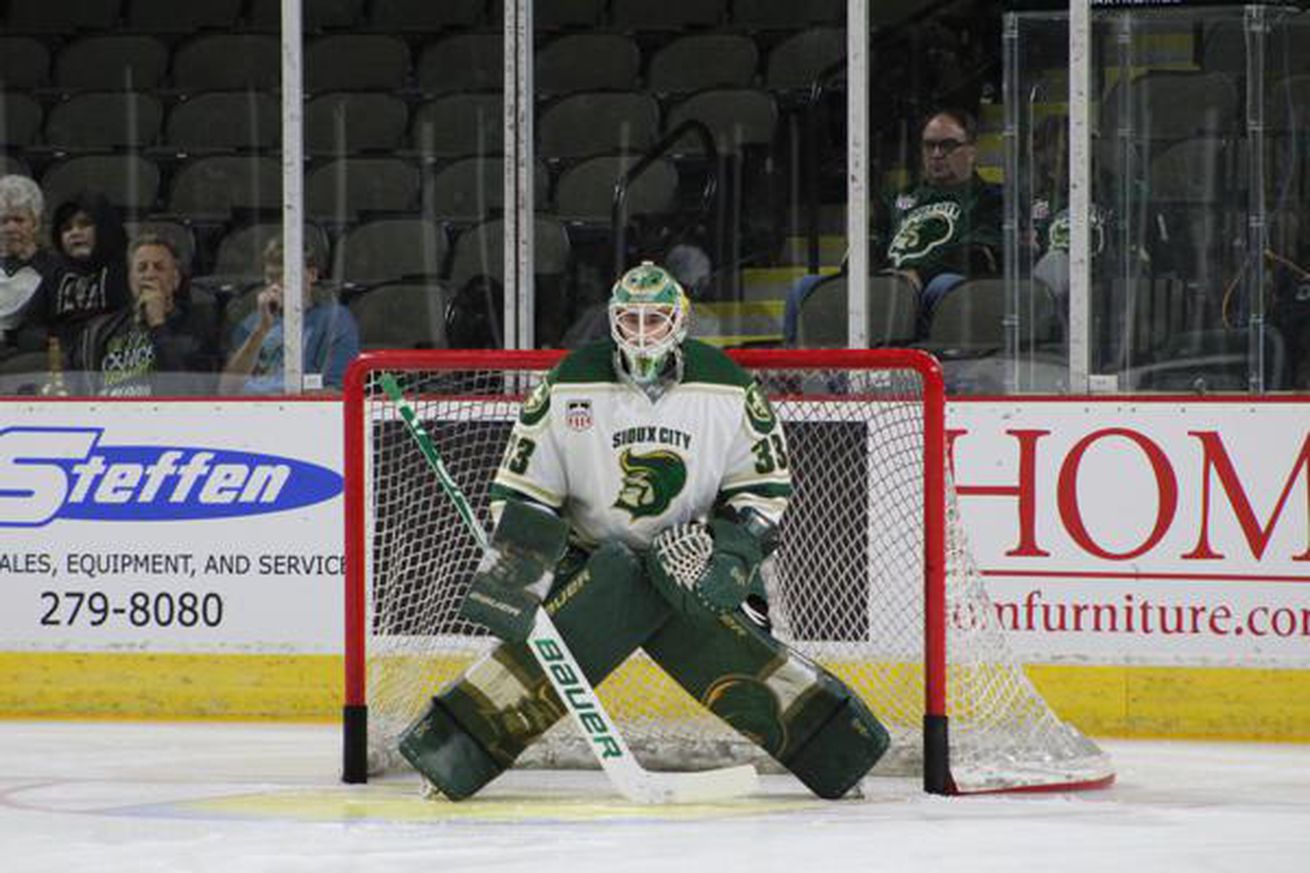 With one USHL season behind him, the American goalie has an NCAA season shrouded in uncertainty ahead.

After a brief hiatus from the goalies to review Philip Tomasino’s 2019-20 season, I’m back with 2019 fifth-round pick Ethan Haider. After the departure of Niclas Westerholm and the lack of a contract offer for Milan Klouček, the Nashville Predators have just three goalies in the pipeline outside of Milwaukee, indicating this is a position they may shore up in free agency or at the 2020 NHL Entry Draft.

In his one (and only) USHL season, Haider struggled at times in net for a Sioux City Musketeers team that finished with just 40 points (16-24-8)—the second-worst record in the league last season. En route to a 0.891 save percentage, Haider faced the fourth most shots of any goalie in the USHL, 996.

Conversely, Haider was excellent at the World Jr. A Challenge in December for Team USA, finishing with a 0.918 save percentage, saving 2.265 goals above average, and winning a bronze medal.

Despite 15 quality starts (allowing fewer than three goals or recording a save percentage above league average), Haider struggled behind a lackluster Sioux City team and ultimately allowed 6.41 goals above average in 2019-20. It should be noted, however, that Haider faced 30 or more shots during 17 different starts last year, including a stellar 52-save (on 56 shots) performance against Waterloo in March.

In my tracking project, Haider stood out when it came to making high-danger saves this season. In seven games, Haider recorded a 0.844 save percentage on these opportunities—the second-best rate in the pipeline behind Milan Klouček.

While he was similarly excellent against low-danger shots (0.972 save percentage), Haider struggled with medium-danger opportunities, stopping them at a 0.904 rate.

When you take note of Haider’s stature, it’s easy to see why the organization felt comfortable with him as a later round pick. At 6’3”, 209 lbs., Haider has a solid frame that fills the net well but doesn’t limit recovery or reaction.

His stance is a traditional one that aggressively challenges shooters to pick corners. In this clip, notice how far out he comes to meet the shooter. Then, in fluid and disciplined movements, he pushes to cover the near post, swings his far leg back along the goal line to match the puck movement, swivels across the crease to meet the play, and returns to stance with ease as the puck exits the zone. It’s those technically sound movements that excite me about Haider’s potential.

On this save from the World Jr. A Challenge, I love that Haider doesn’t panic into an early drop as the Russian puck carrier comes into a high-danger area. He relies on his quick reaction ability to make an excellent save.

Similarly, in this play, Haider tracks the puck well as it moves up and down the corner boards. He’s maintaining his near post so effectively that it’s impossible to imagine an in-tight chance squeezing through. As the puck kicks out to the slot, Haider’s reaction time comes in handy again.

One concern I did notice, however, is how he chases pucks. I appreciate an aggressive goalie who attacks perimeter shots, but too often I saw careless rebounds as Haider lunged slightly out of position, exposing potential high-danger threats like in the clip above.

As he develops at the college level, more discipline in his leg/kick saves will be required to avoid rebounds like the one Cedar Rapids cashes in on above.

Another concern I saw exploited at times is Haider’s five-hole. In the clip above, as the Czech player beats the U.S. defender outside, Haider is square to the puck, but I think his angle to the net may be off just slightly. His stance creeps into this hunch as he commits to a poke check. Unfortunately, the goal-scorer saw that coming before he was even clear of the face-off circle and buries a goal between Haider’s legs.

On a positive note, Haider’s size, span, and push strength allow him to recover into some remarkable saves on chances like the wraparound shown above.

That athleticism combined with his reaction speed results in breakaway saves like this one or, even better, quick recoveries to seal off a near post as he shows once the puck pops loose above the goal line shortly thereafter.

Ultimately, Haider projects to be a three- or four-year college player (especially if this season is severely hindered). He certainly has the raw athleticism and tracking skills to compete, and I’ve seen flashes of his ability to dominate a game. But in the meantime, I’m not sold he projects to be a regular NHL player one day.

Haider is off to Clarkson University for the 2020-21 season alongside Nashville prospect Alexander Campbell. He should slot in as the immediate starting goalie but with a potential challenge from graduate transfer and Lightning prospect Kristian Oldham.

The ECAC season, however, is muddled with uncertainty. In July, the Ivy League announced its member schools would not be playing sports before the end of the year. Half of the conference’s 12 teams are affected (Brown, Cornell, Dartmouth, Harvard, Princeton, and Yale). The latest update from the ECAC is that they’re working out schedule proposals for the upcoming season that are likely to prominently feature in-conference play.

All statistics are courtesy of eliteprospects.com, ushl.com, or manually tracked by myself.