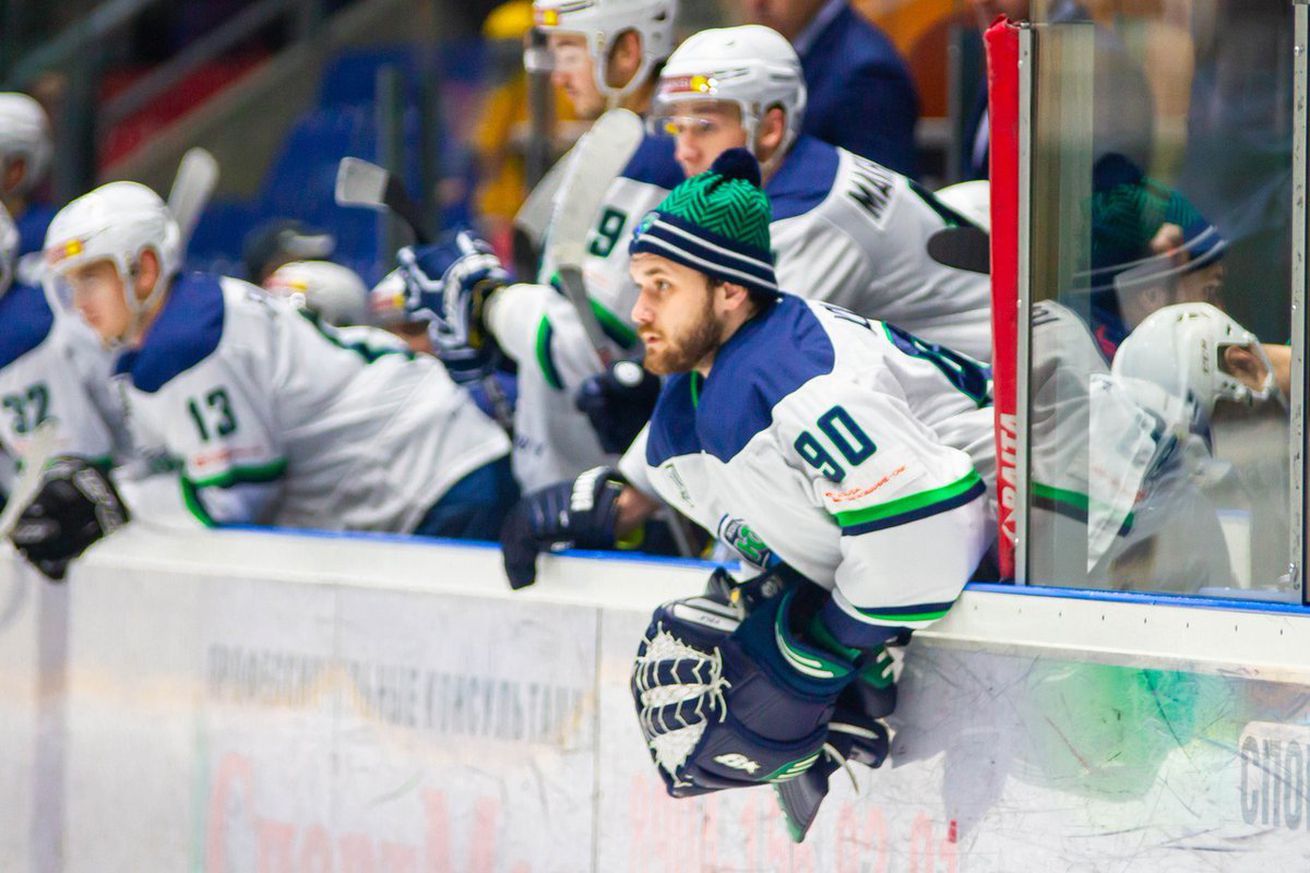 Continuing on in reviewing the goalies in Nashville’s pipeline and their 2019-20 seasons brings me to 2016 6th-round pick Konstanin Volkov of the Russian VHL.

For a look back at my previous installments, see above.

Volkov, drafted in 2016 by Nashville, finished his first season in the VHL with a starting workload in 2018, appearing in 30 games for Ugra. The Russian netminder began the season on a strong note starting eight of Ugra’s first ten games. However, from October on, Volkov’s longest start streak was just four games as Yevgeni Ivannikov took 12 of the last 15 starts of the regular season and all nine playoff starts.

Volkov had a rocky stat line in net, facing just the 32nd most shots (654) of any VHL goalie but allowing the 21st most goals (64)—leading to a 10.37 goals allowed above average rate (worst in the organization this season). At times he was brilliant, posting nine starts with a save percentage above 0.930, but at other times he was just as dramatically inadequate, posting ten starts with a sub-0.900 save percentage.

It’s hard to wrap your head around a goalie’s strengths and weaknesses when they post such oscillating performances throughout the season. Volkov, like many, struggled with high-danger shots, stopping them at an 0.810 rate, but often excelled at stopping pucks from further away, with a 0.938 medium-danger save percentage and a 0.985 low-danger save percentage.

Despite it being a tired expression, Volkov’s downfall this season was often the case of facing too few shots. In the ten sub-0.900 starts mentioned above, he faced more than 25 shots just twice and was pulled before the third period five of those times.

Konstantin Volkov is gifted with an impressive frame, standing at 6’4”, and it shows in how he fills the net. With that in mind, his general positioning in net is solid, but he won’t play with the same aggressive athleticism as Pekka Rinne or Tomáš Vomáčka.

As you can see, Volkov establishes his crease with a traditional stance and is able to track pucks well across the slot with few extraneous movements.

When defending his crease in tight positions, you’ll notice Volkov delays in dropping into a butterfly position, whereas other goalies may already be there, paddle down, as the puck carrier approaches the goal line. Volkov maintains tight coverage of the post in his stand-up, but as he lunges for the puck, you can see where he exposes himself to rebound chances.

In this clip, as the puck carrier hits the top of the circle, Volkov is quick to cut back deeper into his net. He then fends off a low-danger shot with his blocker, which stays in stagnant position alongside his glove through most of his movement. It’s undoubtedly good fundamental technique.

Where Volkov can get into trouble however, is his adjustments. Take the odd-man rush above for example. The defender is playing the rush well, knowing his opponents are too far apart to connect on a pass, and Volkov establishes position expecting a shot. However, as the puck carrier approaches, you may notice just a slight miscue in Volkov’s angling. He seals the path to the net well from the shooter, but his body is rotated just slightly too far to his right. He’s lucky the rebound bounced the way it did, but had it gone towards the crashing forward, Volkov would have had no chance at a save with his poor recovery speed.

On the goal shown above, most goalies would have had little chance to stop that puck. But I’m more concerned again with Volkov’s recovery movements. He misreads the traffic in front and starts shuffling the wrong direction. Understandable, but there’s such little urgency in those recovery pushes that he’s nowhere close to set when the puck goes in the net.

Another pitfall of Volkov’s game is the one that deals with the mental side of things. As noted above, too often was he unprepared or simply unfocused in games this season, falling apart after just a couple shots. Every now and then, he was prone to struggle with low-danger chances, particularly shots lower to the ice. I’m unsure if it’s a misstep in his glove technique or his stance, but as seen above, it can be exposed to an unfortunate degree.

Regardless, Volkov still has the skill and size to be a dominant presence in the net, execute fast cross-crease movements and make brilliant high-danger saves as seen above.

Ultimately his weaknesses may be too much to prevent him ever being a true KHL starter, despite the raw ability.

In April, Volkov signed a one-year contract extension with Ugra where he’ll start next season as Yevgeni Ivannikov signed a KHL contract with Neftekhimik Nizhnekamsk. Nashville’s exclusive negotiating rights with Volkov are indefinite, but I don’t anticipate we ever see him sign an entry-level contract with the organization.

All statistics are courtesy of eliteprospects.com, vhl.ru, or manually tracked by myself.