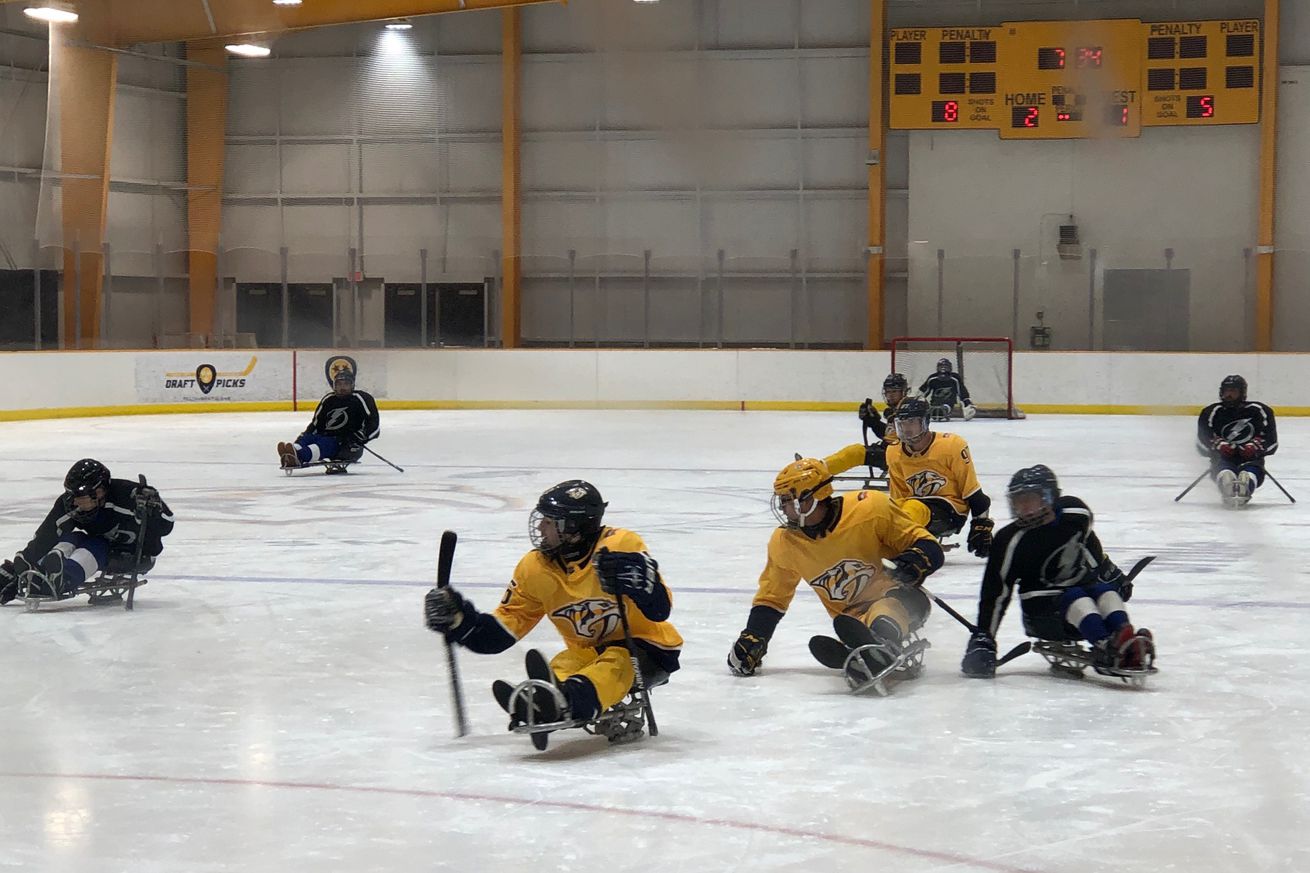 Let’s look back to the golden days of last week, when there were still distractions.

Last weekend the Nashville Sled Preds hosted the SESHL Championships at Ford Ice Center Bellevue. Adult B and C level teams from Carolina, Charleston, Tampa, and Knoxville traveled to Nashville to compete in the third and final SESHL league weekend of the 2019-2020 season. While sled hockey creates a lively camaraderie among players that was obvious this weekend, it was just as evident that these teams came ready to compete once they took the ice.

Nashville began the second period with several good-looking chances, but it was Carolina who scored twice partway through the period. With less than :10 left, Nashville’s Hoback found the back of the net, ending the second period down by only two. The Sled Preds spent much of the third period in the defensive zone, and both teams had some missed opportunities.

The game ended with a Carolina win 4-2.

With just an hour between games, the Sled Preds headed back on the ice against Charleston Friday evening. Both teams came out strong with shots on goal at both ends almost immediately. The Sled Preds spent a lot of the first period in the offensive zone, but neither team was able to record a goal in either of the first two periods despite an abundance of action. The only goal of this game was an unfortunate “own goal” score (think Nick Bonino against the Capitals) in the third period by the Sled Preds.

With 2:04 remaining in the game, the Sled Preds went empty-net, but even with the extra attacker, they couldn’t find the back of the net and dropped this game 1-0.

Facing Carolina again, the Sled Preds came out with strong offense in the first few minutes of the game. With 9:15 left in the period, Carolina’s Gilbert scored. Carolina scored again midway through the second period on a shot over the Sled Preds’ goalie Kwiatkowsi. Down 2-0 in the third period, the Sled Preds were called for a penalty, but the team was able to hold off Carolina with some critical clears and some time in their own offensive zone. Unfortunately Carolina got hot and found the back of the net three times in a four and a half minute span, and the Sled Preds ended up on the losing end of a well-played game.

Despite tough losses in early rounds, Nashville found itself facing the tough Carolina team yet again Sunday morning. Carolina netted the only score of the game in the first period. The Sled Preds worked hard to even the game, but weren’t able to convert good action into goals. It remained a close game, but in the end, the Sled Preds lost to the Carolina Warriors 1-0.

This game was fast-paced from start to finish. With Tampa’s Witkowski and Nashville’s Torres on the ice, it was obvious that speed would play a major part in this game. Tampa scored first with 9:29 left in the first period after a scramble in front of the net and then again with 6:54 remaining in the first.

The Sled Preds’ Torres finally found the back of the net off of a terrific keep-in by Fitzgerald with 4:32 left in the second period. Third period action included breakaways disrupted by quick defense, key goalie plays, and the gut wrenching sound of a Sled Preds shot bouncing off the post. Tampa finally slipped another goal across the line with 8:35 left, making the score 3-1 in favor of Tampa.

The Sled Preds pulled their goalie and with 1:28 left, Nashville’s Phillips immediately scored off of a Sled Preds face off win, but Tampa’s win was sealed by an empty-net goal with :16 remaining by a racing Witkowski.

The intensity and physicality of this in-state game is definitely worthy of a catchy rivalry game name. (Suggestions, anyone?)

The Sled Preds wasted no time getting on the board less than a minute in on a gorgeous Torres goal off a perfectly-placed pass from Phillips. Knoxville answered back partway through the first, but with just over a minute left in the first, Torres used his speed and scored on a breakaway. With :45 seconds left in the first, the Sled Preds committed a penalty and were forced to open the second period on the penalty kill. Knoxville wasn’t able to score with the skater advantage, and Nashville ended the period with two more goals by Phillips and Torres.

The third period saw Nashville goals by Earle and Zayas, and the Sled Preds won this physical game 6-1.

After the intensity of their first match-up in the tournament, this game was bound to be even more physical. It was.

Partway through the first period, a collision with the Sled Preds goalie led to a five minute penalty for the Knoxville Bears. During that power play, the Sled Preds kept pressure in the offensive zone but weren’t able to find the back of the net until near the end of the period when Nashville’s Torres finally put one in from the slot. Torres opened the second period with another score.

Two penalties in the second period by Nashville led to a 5-on-3 chance, but the Sled Preds were able to keep Knoxville scoreless through the remainder of the period. The Sled Preds turned it on offensively in the third period, recording another two goals by Torres and one by Zayas to win 5-0.

This rematch of Friday’s first game was more fast-paced sled hockey. With Nashville’s Torres and Tampa’s Witkowski and Yates on the ice, it was a game of speed again. Tampa scored first, but a Torres goal tied it up in the second period.

Unfortunately, Tampa slid one more score past the goalie with 3:02 left in the game and won the championship 5-2.

The Sled Preds B and C teams had a strong showing over the weekend and would have taken that momentum to the large 2020 Disabled Hockey Festival in Pittsburgh, PA. With widespread COVID-19 cancellations, the Disabled Hockey Festival scheduled for April 2-5 has also been canceled for this year. The Sled Preds Tier 1 team had hoped to head into Pittsburgh off their championship win in the Midwest Sled Hockey League tournament over the weekend in Chicago. While the cancellation of this major national tournament is disappointing to players, coaches, and fans alike, the Sled Preds program wrapped up their shortened season with terrific weekends across all levels.