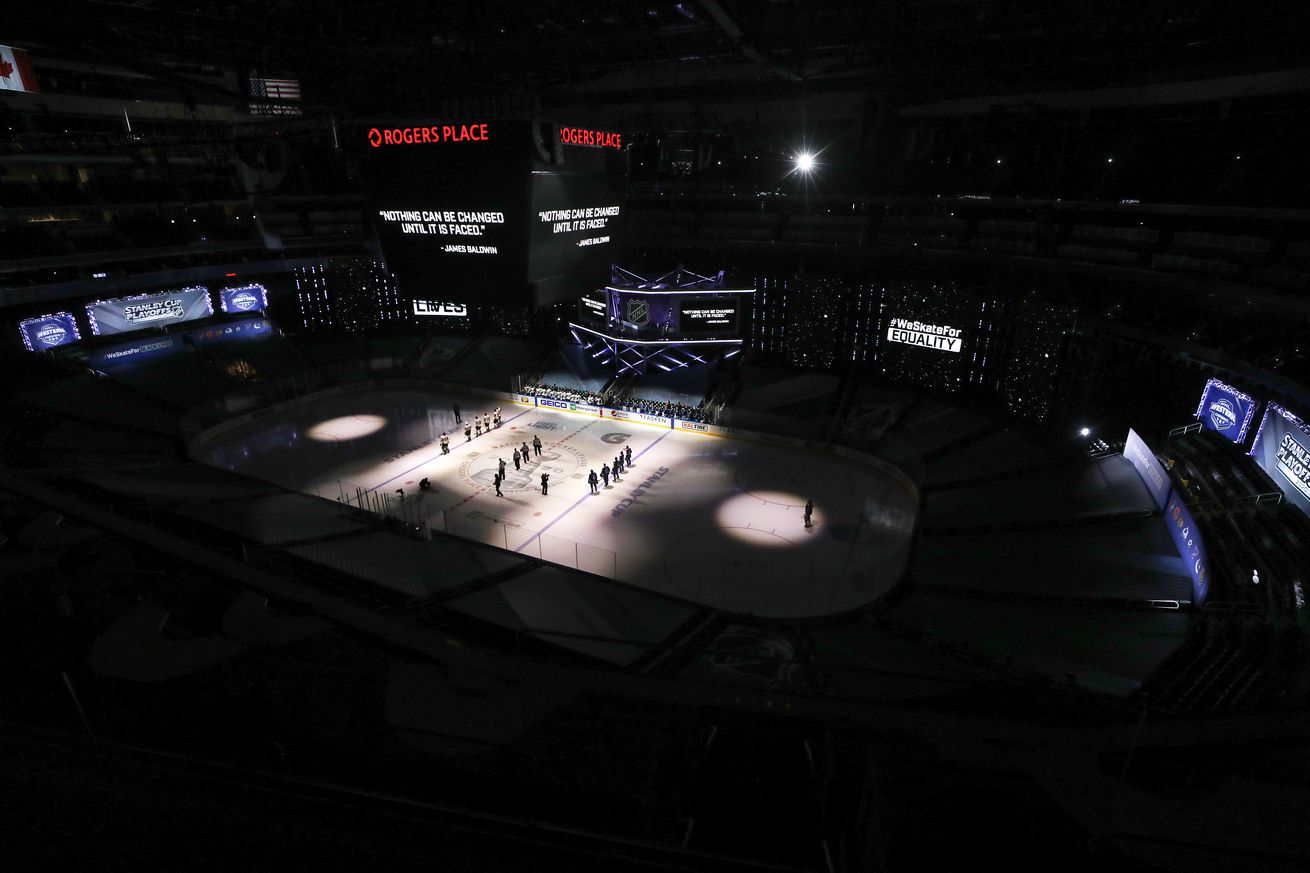 With hockey back, it will be up to the NHL and the players to sustain whatever progress they’ve started to make.

NHL holds moment of solidarity ahead of three games Saturday | Sportsnet.ca
“But when an issue is bigger than the game we must speak out, starting with three words we need to get comfortable saying: Black. Lives. Matter. Equality is the only way forward. As players, as fans and as active citizens we must confront these issues.”

Black Lives Matter remains focus as NHL returns from player-driven postponement | Sportsnet.ca
It’s really very weird to me that the articles about how, even after spending a few days working together towards a common cause, hockey is now back all focus on…hits, fights, and penalties to show that the players haven’t let empathy get in the way of sports. Obviously that’s part of what people were expecting to see, but it’s far from the only means of effort or competition.

Lightning take 3-1 series lead, push Bruins to brink of elimination | ProHockeyTalk | NBC Sports
Ondrej Palat has been having himself an August.

The NHL Did Good, But Now It Needs to do Better | Silver Seven
Our colleagues at Silver Seven Sens take a look at how the NHL got here and where it should go from here.

Our ask of the NHL: Press Release | The Hockey Diversity Alliance
Here’s the pledge the HDA is hoping the NHL will commit to sign, to support statements with action.

CEO Brad Alberts says Stars have lost season-ticket holders over the team’s support of Black Lives Matter | Dallas News
This is disappointing but not surprising, and I suspect is one of the reasons the NHL was so slow to respond, compared to other sports leagues. The first thing that was always going to happen–before fans of color started to be able to believe that the NHL cared about them, and hockey was able to start growing its fanbase–was going to be racists getting angry and pulling financial support. I’m glad that Alberts is comfortable with his stance.

(Answer: Yes, Matt Martin and Leo Komarov. You’d have to pay me to watch this Islanders-Flyers series but apparently some unexpected contributors are, well, contributing.)

PWHPA announces partnership with EOS, Parity | The Ice Garden
More sponsorships for elite female athletes–meaning both more earnings for them and higher visibility for them and their sport–would be a great thing. Here’s hoping this works out.

Golden Knights beat Canucks in Game 3 | ProHockeyTalk | NBC Sports
So, uh, why couldn’t the Canucks have decided to interrupt some of their own power plays against the Predators this year by deciding to go six-skaters-and-a-goalie? Congrats to Robin Lehner on the shutout, though.

The Hockey Hall of Fame isn’t doing enough to recognize women’s hockey | The Ice Garden
It is ridiculous that the HHoF hasn’t inducted more women. The number of women who can enter the Hall is completely unrelated to the number of men; there’s no excuse not to be recognizing more of the trailblazers and stars.