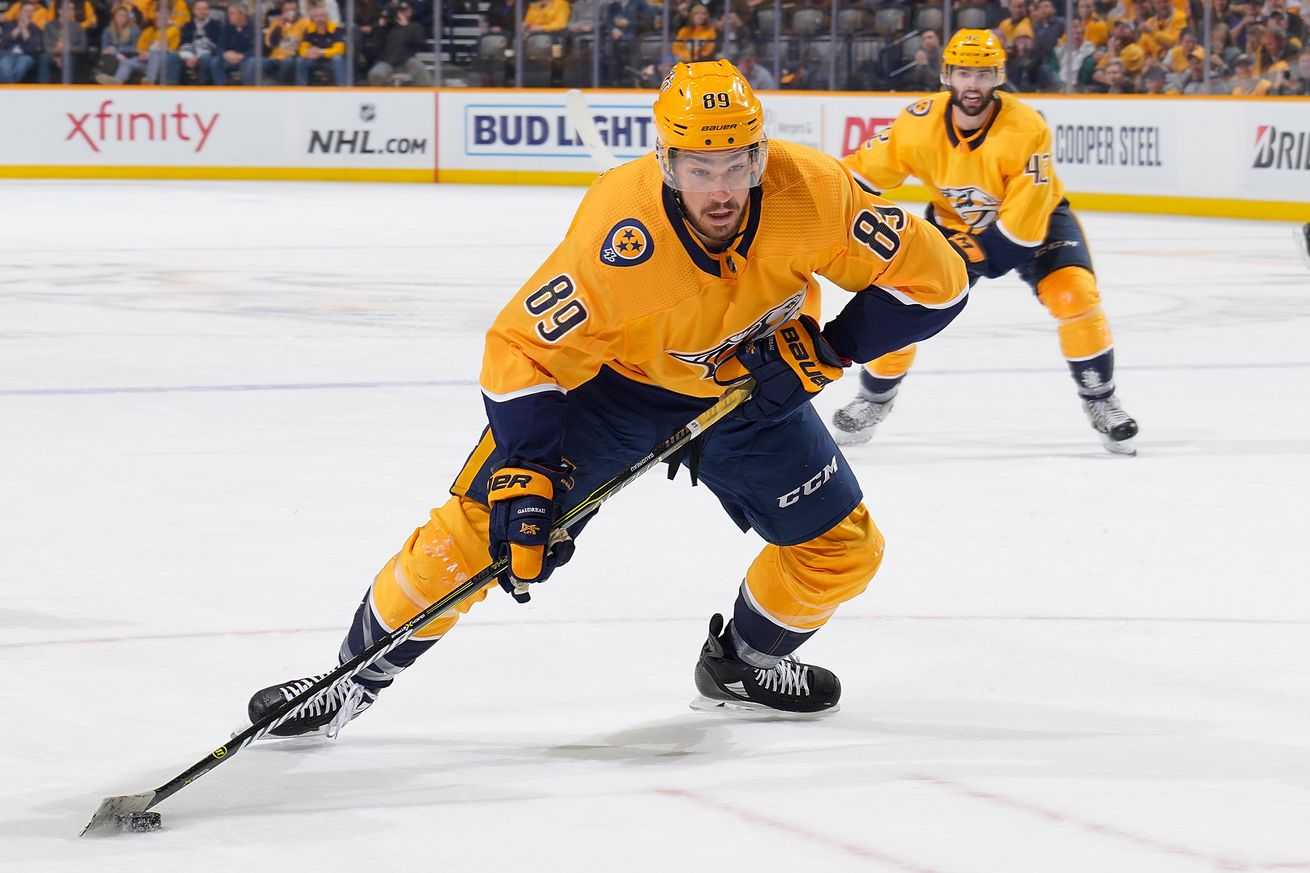 89 on the jersey, but number 1 in my heart | Photo by John Russell/NHLI via Getty Images

Bryan’s filling in today, so we get a nice picture of Freddy Gaudreau as a treat

2020 NHL Entry Draft Profile: Noel Gunler (F) – On the Forecheck
Eric is back with another draft profile with the talented Swede that could be an option for Nashville at pick number 11. Make sure you watch for more of his coverage as we approach the draft on October 6th.

17-year-old junior hockey player hopes his coming out will inspire others | CBC News
Moncton Flyers forward Yanic Duplessis came out as gay in a sport that has yet to be welcoming to the the LGBTQ+ community. The 17-year-old QMJHL player hopes to inspire others like him going forward – this is a great, inspiring story that I hope you take the time to read.

PWHPA Player Roundup: September 12 – The Ice Garden
The great folks at The Ice Garden have been doing an amazing job in keeping up with all the news regarding players committing to playing in the PWHPA’s second season. Make sure you check it out!

Western Conference Finals Stats Recap: September 12, 2020 – On the Forecheck
All that statistics and charts you could ask for from last night’s Stars win over the Golden Knights. Vegas faces an elimination game Monday night in Game 5.

Benn, Radulov & Spezza: Sleight of Hand – The Hockey Tactics Newsletter
If you know me, I’m constantly preaching that players should be focusing on getting shots off from high-danger areas and avoiding taking a ton of low-percentage shots from the outside. Jack Han looks at how the Dallas Stars have managed to beat Robin Lehner in the Western Conference Finals with low-percentage chances, and examines how there’s more than the shotmap shows.

2020 NHL Draft to be held virtually Oct. 6-7 | NHL.com
Originally the NHL’s Return To Play protocol stated the drafted would be seven days after the conclusion of the Stanley Cup Finals, but the league decided to nail down a date ahead of time. So that’s cool.

NHL free agency to start Oct. 9 | NHL.com
The NHL free agent market will open Oct. 9 at 12 p.m. ET, so Nashville has less than a month to figure out what they’re going to do with the likes of Kyle Turris, Craig Smith, and Mikael Granlund. There have been reports of Taylor Hall having interest in coming to Nashville, but that would be mean the likely departure of all three names I mentioned.

Lehner denies report he’s agreed to contract with Golden Knights | NHL.com
The Vegas Golden Knights goaltender denied that he has signed a 5-year, $25 million dollar contract as was reported on Friday. He said that he wanted to keep his focus on the series against the Dallas Stars, so hopefully he finds that focus soon.

Toffoli looking to stay with Canucks rather than becoming free agent | NHL.com
It would be nice to have a similar story for the Nashville Predators – a forward slated to become a free agent who wants to stay, but needs cap room. Tyler Toffoli is looking to do so with Vancouver, and luckily the Preds have more room, but still, Craig Smith, please stay.

Patrick remains in Flyers’ plans, out 17 months with migraine disorder | NHL.com
I cannot imagine trying to play hockey again while dealing with a migraine disorder for the last year and a half. I get a migraine and I’m ready to give up everything forever. Hopefully Nolan Patrick recovers and is able to restart his career soon.

MacKinnon of Avalanche wins Lady Byng Trophy for gentlemanly conduct | NHL
I don’t know about you, but this award seems to be awarded by the voters going to the stats page, sorting by penalties taken, then picks the forward with the most noteworthy name. It’s just about as scientific as our staff picking Pekka Rinne for the award a few months ago.

I don’t normally do the Dump & Chase on this day, but since I’m here – time for the Sunday anthem.