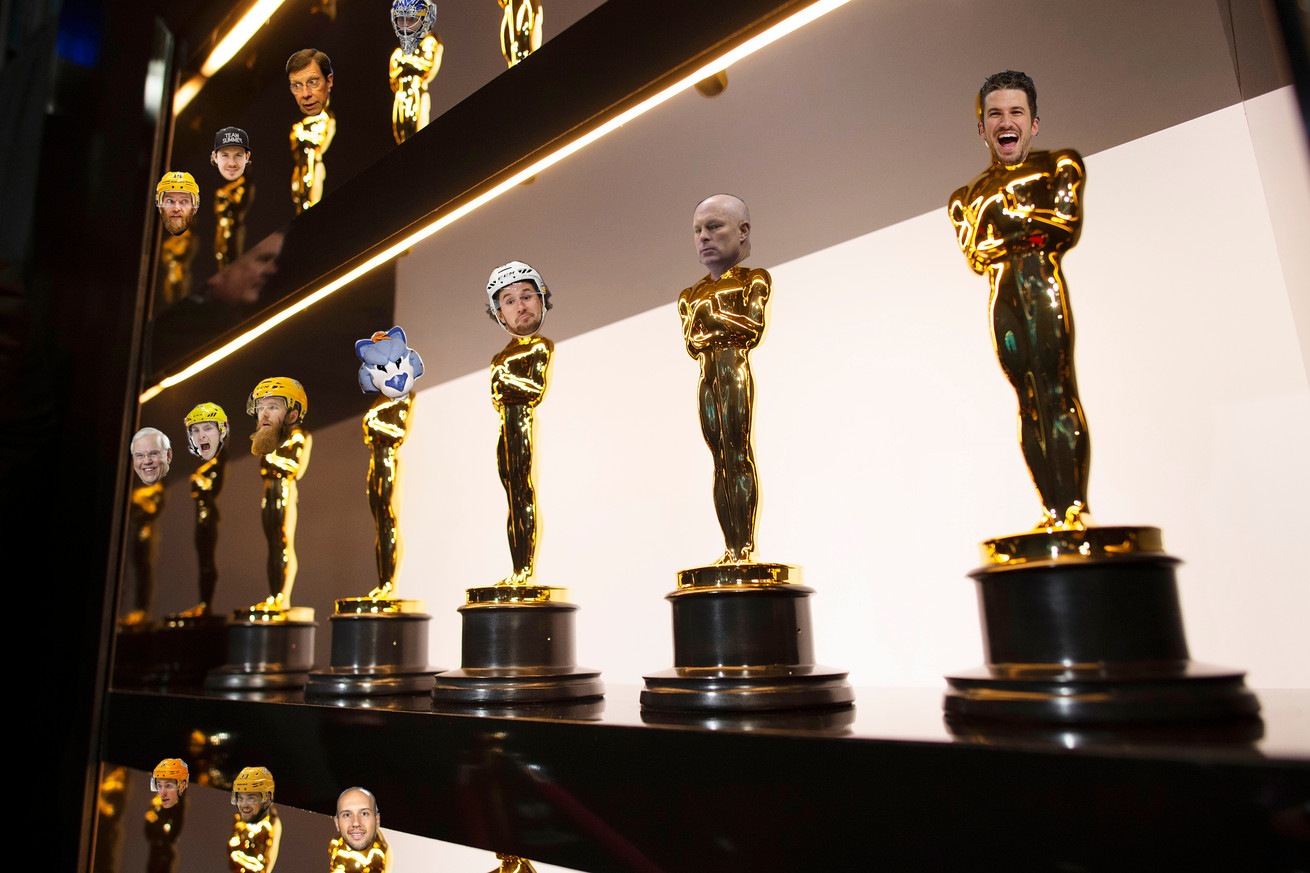 We’ve now had more than a month to digest the 2019-2020 Nashville Predators season… the highs, the lows, and the inherently frustrating. It’s also given your friendly neighborhood On The Forecheck staffers time to celebrate the positives this year had in store.

We asked our writers to cast a ballot for the 2020 Forecheckies, our annual end-of-season awards. The votes are tallied similar to the real NHL awards—5 points for a first-place vote, 3 for a second-place vote, and 1 for a third-place vote. Some of the categories were no-brainers; others can be categorized, as our resident college child Eamon would say, as “HAWT TAEKS.”

So sit back, grab some popcorn, feel God in a Chili’s, or whatever else you do during an awards show and enjoy the votes while we wait for the real NHL awards tonight.

The OTF Most Valuable Pred

Normally, award shows save the biggest award for last. But let’s be honest, you knew who was winning this before you even clicked this link. Eleven OTF staffers cast ballots for end-of-season awards, and all eleven named Roman Josi the Predators’ most valuable player from the 2019-2020 season.

The Preds’ captain put forth one of the best individual seasons in franchise history, setting records for points by a defender (65) and assists by a defender (49), as well as a personal career-high for goals (16). All of those milestones came despite a shortened regular season, leaving many of us to wonder what other team records Josi could have vanquished in a full 82-game schedule.

Beyond the stats, Josi’s leadership and consistency provided an anchor for the Preds during some tumultuous stretches of the season. He elevated his game at a time some of his higher-profile teammates struggled with poor play, and when his partner Ryan Ellis missed extended time with a concussion (a time many expected Josi to fall off the pace a bit), Josi responded with some of his best hockey of the season. It’s not a stretch to say Josi’s performance this season may have kept the Predators alive in a playoff race they had no business being in. With a new record-setting contract under his belt, we’ll have to see if the captain can elevate his game even further in 2021.

The Paul Kariya Offensive Player of the Year

There was a lively discussion among the OTF staff about this category. But in the end, the voters named gave our top offensive award to the Predators’ most dynamic forward.

Forsberg led the Preds in goals (21) and power play goals (7), and was tops among forwards with 48 points during the regular season. He was also arguably the Predators’ best player during their play-in round series against the Coyotes, leading the way with 3 goals and 5 points.

Despite constant line shuffling, Forsberg managed to find chemistry with virtually any set of linemates he was partnered with; whether it was with Matt Duchene, Mikael Granlund, or Kyle Turris, or his old JoFA stalwarts Ryan Johansen and Viktor Arvidsson, whichever line Forsberg was on usually became the Preds’ most productive scoring line.

The Weber-Rinne Defensive Player of the Year

While Josi’s record-setting offensive year deserves to be celebrated, one of the most impressive things about this season has been his improvement defensively, something our OTF voters recognized.

Josi’s rate of 2.18 expected goals allowed per 60 minutes was his best since 2017, and a major improvement from the past two seasons. He was especially effective in preventing chances in front of his own net, using his elite skating and positioning skills to get to areas that allowed him to disrupt the play. One of the most impressive stretches happened with Ellis sidelined. Josi often played 28-30 minutes a night with his regular partner, providing stability to a blueline already stretched thin. Once Ellis returned, he and Josi combined to form perhaps the league’s best two-way defensive pair.

Newcomer of the Year

Among all of our prestigious OTF awards, this one was by far the closest vote. A lot of the OTF staff seemed hesitant to put Duchene atop of their ballots, perhaps soured by the fact the $8 Million Man failed to reach many people’s statistical expectations.

That being said, Duchene’s first season in Smashville did feature a handful of high notes. This included a hot start to the season, which saw #95 score nine points in his first five games. He finished with 42 points, good for third on the team. There were also a handful of times Duchene either set up or had a chance to finish a would-be goal that either rang off the post or was stopped by a highlight-reel save, giving us evidence that there may be a better season on the horizon.

A whopping 13 different Predators received votes in this category, but no one came close to Nick Bonino.

“Bones” did a little bit of everything for the Preds this season. He provided a scoring punch—his 18 goals were tied for second on the team. He was the team’s best defensive forward; he blocked shots; he consistently won key faceoffs (many in his own zone). And throughout the season, he centered arguably Nashville’s most consistently-effective line.

But despite his value to the team, Bonino doesn’t always get the appreciation players like Josi, Ellis, or Forsberg receive. He understands his role on the team and plays it to perfection, and the fact that he stepped up his game at a time many of his teammates were caught in slumps did not go unnoticed by our OTF voters.

And speaking of Bonino, our OTF voters also gave him kudos for his best individual season as a Predator.

Bonino’s 18G-17A-35P stat line was nearly identical to last season’s (17G-18A-35P.) But he matched those totals in fourteen fewer games. Had the COVID-19 stoppage not happened, Bonino realistically could have either matched or broken his career-high in goals (22), and likely would have hit the 40-point plateau for only the second time in his career. As mentioned earlier, Bonino also rebounded from a less-than-stellar defensive season in 2019, and became a reliable asset on the defensive end of the ice.

Prospect of the Year

Just one year after being taken 24th overall in the 2019 NHL Draft, Tomasino is starting to look like the Preds’ most electrifying prospect. The 19-year-old hit the 100-point mark while splitting time between Niagara and Oshawa in the Ontario Hockey League. That was the fourth-best scoring total in the OHL, only behind likely 2020 top picks Marco Rossi and Cole Perfetti, and Capitals prospect Connor McMichael.

It sounds like Tomasino’s breakthrough season in the juniors may lead a faster path to the NHL. Two different sources told On The Forecheck’s Bryan Bastin that the Predators are planning to have Tomasino in Nashville to start the 2020-2021 season. He’ll obviously have to earn his spot, especially with next season looking like a make-or-break year for this current core. But it’s clear the Predators are high on him, and plan to have him as a centerpiece in their long-term plans.

Goal of the Year

Look, there was only ever going to be one right answer to this category. There’s really not much to say about Pekka Rinne’s first career goal—only the 15th goalie goal in NHL history—that hasn’t already been said. So let’s just enjoy this moment one more time.

Game of the Year

I think Rachel summed this one up perfectly in her recap for the game: “WOW WOW WOW.”

Even from a non-Preds fan perspective, this game was awesome. The Flames had seemingly stolen a win with a go-ahead goal just 43 seconds left in the game. But Mikael Granlund—with “One Shining Moment” playing somewhere from the void—gave us a good ol’-fashioned buzzer beater, netting the tying goal with 0.2 left on the clock. Granlund would play the hero again in overtime, giving Smashville a memorable home win—one that kept the Preds afloat in the playoff race.