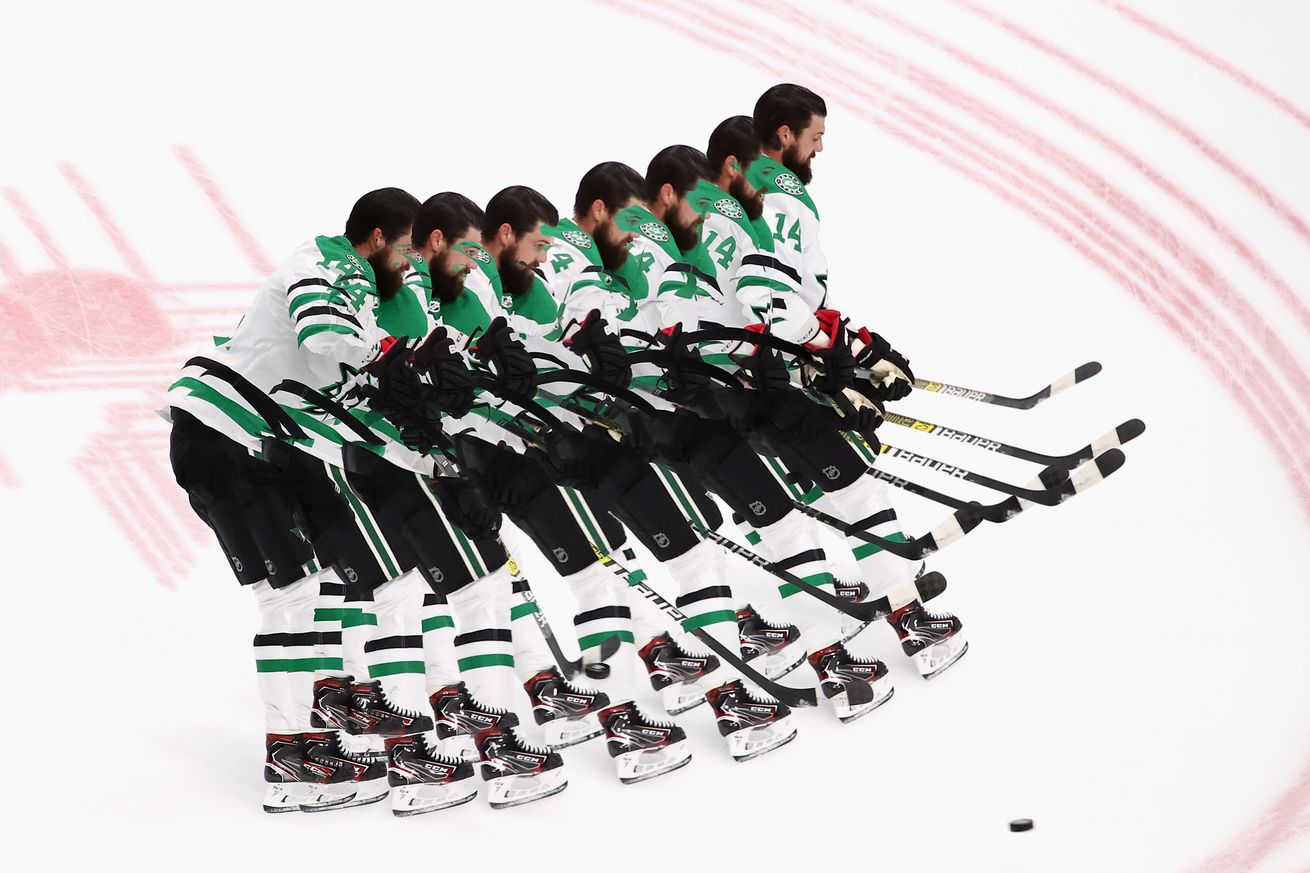 These photographers are either getting creative or very bored, but lordy, I am here for it | Photo by Bruce Bennett/Getty Images

It’s no fun sitting down to watch one team pull away in the second period – what happened to all those overtime classics?

Nashville Predators Prospects Season in Review: Defenders – On the Forecheck
Eric continues to provide fantastic analysis of Nashville’s prospects in the juniors, including a glowing report card for young David Farrance.

Preds Announce Schedule for September in Smashville | NHL.com
The Predators announced their events for fans this September, including a virtual used-equipment sale, the Fangtastic 5K, golf and fishing tournaments, and much more.

Shaun joins me on to talk about the reports of Yakov Trenin’s impending future in the KHL and what that means for his free agency this offseason and his role with the Nashville Predators. We also look into another upcoming free agent, Daniel Carr, and how the two players likely have very different paths in this organisation.

Nick and I discussed Monday’s news that Mikael Granlund intends on testing the free agent market before considering re-signing with Nashville. We look at his projected cost, if it’s possible he returns to the Predators, and compare him to fellow free agent Craig Smith and how the Nashville approach should be very different between the two. We also discover live that some people project Taylor Hall to Nashville, so we discuss that, and I kick it off with an impromptu hip-hop history lesson.

Western Conference Finals Stats Recap: September 8, 2020 | On the Forecheck
Stats recap for last night’s Game 2 shutout of the Stars by the Golden Knights.

Bubble Hockey | Hockey Graphs
Another edition of the Hockey Graphs newsletter (why aren’t you subscribed yet), featuring recaps of each round 2 playof series from Alison Lukan and Shayna Goldman, the Tampa Bay Lightning’s adjustments on special teams that made their power play dominant (from Shawn Ferris), and the always incredible Meghan Hall continues the noble crusade of PULL YOUR GOALIE and how teams have been doing during these playoffs. Highly recommended!

The 2F3D Project: OZ Activation | The Hockey Tactics Newsletter
Jack Han continues his series on how a 2 forward, 3 defenseman offense could work, this time focusing on offensive zone activation. I know that it seems like the opposite of what most of us would want to see – especially considering Peter Laviolette’s insistance on a 2D3F power play for so long – but Jack expertly combines film and tactics to show that there’s more to the idea beyond the traditional “forward” and “defenseman” labels.

What Happens When Alison Lukan Finds Her People | Asking For Directions
Bill West continues his series on the people behind hockey analytics with the person who might be the best writer in hockey that can combine statistics and reporting for excellent storytelling, Alison Lukan. At CBJHAC in February, I watched her organize an entire conference, then cover a game without skipping a single beat. Plus, she’s easily the nicest person I’ve met in hockey without a doubt. It’s a great read – plus you get to see her in her Richmond Spider mascot suit!

Do NHL Teams Get Better Goaltending By Spending More Money? | Draglikepull’s hockey research
An interesting dive into the argument that spending more money on goaltenders doesn’t give you better goaltending results. Looking into the numbers, however, finds that this may not be true, even if there’s a lot of variation built in.

6 Paradoxes of Skills Coaching – The Hockey Tactics Newsletter
Another piece from Jack Han, and while it technically isn’t analytics, it’s a great look at coaching techniques that at times, feel like they don’t make any sense. For example, “To go really fast, start really slow”, and uses footage of P.K. Subban’s practice routine to point out that while it is impressive how fast he gets through drills, that can be to the detriment of his technique.

This is a great piece for anyone both playing hockey or coaching it.

Book Review: “On the Edge: Women Making Hockey History” | The Ice Garden
Mike Murphy reviews the almost 25 year old book On the Edge: Women Making Hockey History, and recounts how the struggles and work put into in women’s hockey prior to the Nagano Olympics molded the sport prior to the breakout moments at the Winter Games that changed women’s hockey forever. I’ve already ordered a copy and Murphy’s review of this engaging, yet frustrating dive into the forces working against women’s hockey helped push me over the edge.

How to watch the SDHL 2020-21 season | The Ice Garden
Michelle Jay, one of our friends over at the Ice Garden has you covered – find the ways you can watch the Swedish league both in country and out, for a very reasonable cost. It’s great to see leagues making access to their games easier for all fans, no matter the location.

Calgarian’s advocacy for diversity makes him NHL O’Ree award finalist | Calgary Herald
It was announced last night that Dampy Brar of Calgary won the NHL’s Willie O’Ree Community Hero Award that recognizes individuals that use hockey to make a positive impact on their community. This is a profile from the Calgary Herald that goes into detail about all the fantastic work Brar has put into his community through leadership, mentorship and being an advocate for both women and cultural diversity.

Marshall Warren | Untold Athletes
Warren, a Minnesota Wild draft pick, talks about his experiences growing up in hockey and how being black in the sport acts as both a blessing and a motivation for his future. Fantastic first-hand read.

Vegas Steamrolls Dallas To Tie Series 1-1 | Defending Big D
Taylor Beard of our Dallas sister site Defending Big D breaks down, well, the Stars breakdown last night against the Vegas Golden Knights after shutting them out this weekend. As always, it’s great work done by a great journalist, and you can never go wrong with anything Taylor does.

Lightning make emphatic statement in routing Islanders 8-2, take early series lead in Eastern Conference Final | Raw Charge
There are two sides to every story: this comes from our friends at The Raw Charge, who break down the 8-2 drubbing of the New York Islanders by the Tampa Bay Lightning. But on the other side of the coin…

Lightning 8, Islanders 2: Well, it was only Game 1 | Lighthouse Hockey
…The folks over at Lighthouse Hockey watched the game from a pretty different angle than their Tampa Bay brethren. Both are good, detailed recaps of Game 1 prior to tonight’s matchup, and are great companion pieces in order to prepare yourself for the game

Ryan of Senators wins Masterton Trophy for perseverance | NHL.com
While our own awards earlier this summer predicted Oskar Lindblom, Bobby Ryan of the Ottawa Senators took home the Masterton Trophy on Monday night after his leave of absence due to his struggles with alcohol abuse. Ryan, Lindblom and Stephen Johns were all worthy of the award, in my opinion, and it’s good to see perseverance pay off.

Recchi hired by Devils as assistant coach | NHL.com
After three years with the Pittsburgh Penguins, the New Jersey Devils hired Mark Recchi as an assistant coach. Still waiting to hear what Nashville plans to do with one of their own vacancies…

Which remaining NHL playoff team benefits most when everyone is fatigued? | Sportsnet.ca
Justin Bourne takes a very interesting look at how the playoff schedule – even before accounting for the COVID19 bubble – differs from the regular season in terms of scheduling, and investigates which teams benefit from playing games rapid fire like they are right now.

Ryan (@angrypredsfan on Twitter) and I brought up how Patrik Laine only scoring 28 goals this season would be a superstar year if he played for the Predators. Then he dug up an old tweet of his, that frankly, is pretty depressing:

So I was curious about how bad the preds look in regards to their single season franchise leaders compared to every other franchise. Third lowest franchise points leader, and (to make it sadder) Vegas is one of the two teams below them pic.twitter.com/iTZbOfX9kx

I don’t have any anecdotes or reasons why I picked this – it’s just one of my all-time favorites. Enjoy. (Bonus points if you can tell me in the comments what 2000’s era song sampled it)