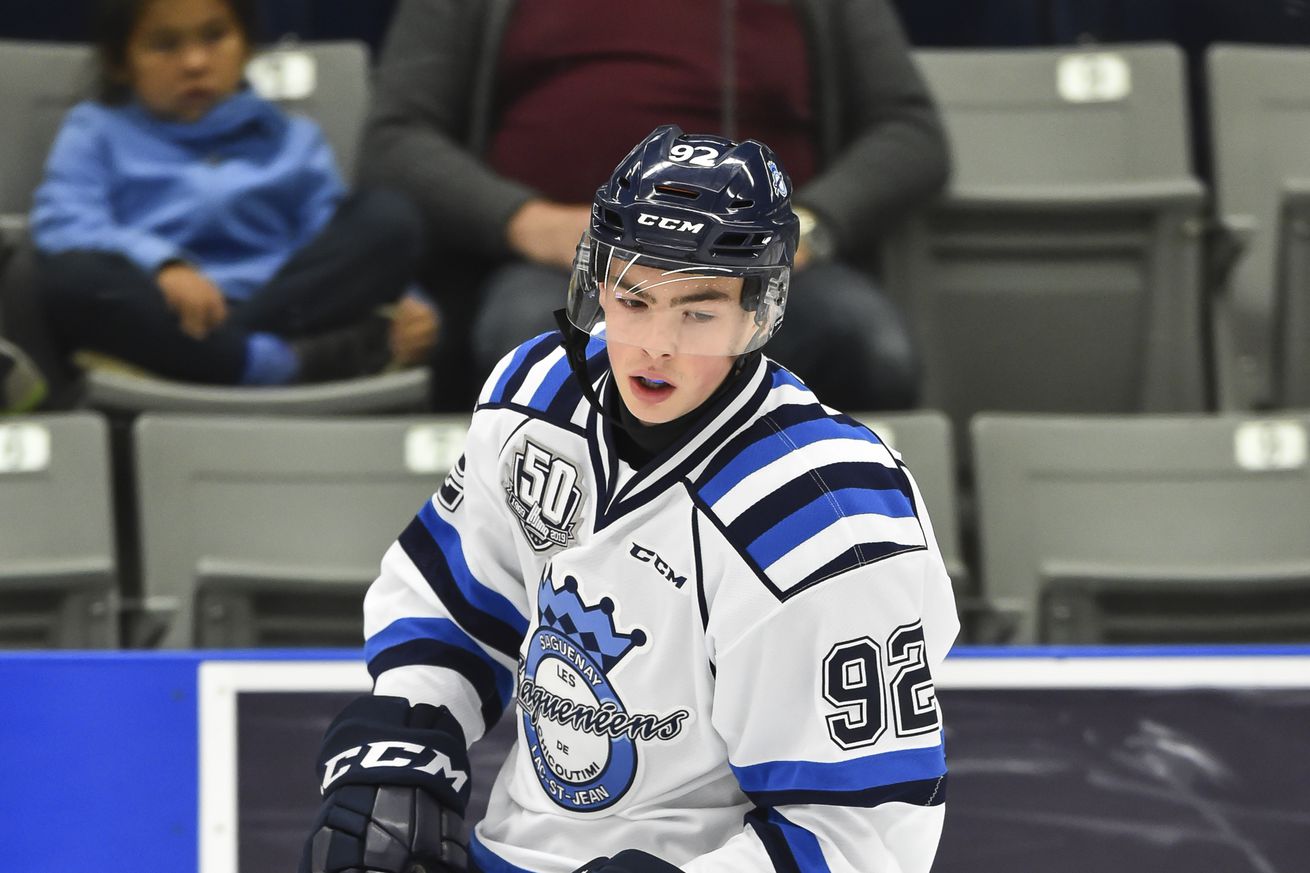 Once regarded as a potential top-ten pick, the QMJHL center could fall into Nashville’s lap due to injury concerns.

If you’ve been following OTF for a while now, you’ve seen Eric’s amazing prospect reports every year. He does a great job breaking down a prospect’s skills and where they should fall in the draft. What I want to do with this series is take a look at some of my favorite prospects from another angle: how would they fit into Nashville’s prospect pool? I’ll look at things like star probability, underlying numbers, and what I think of a player from my watches to give you all the reasons why you should want the player.

For my fourth player in this series, I’ll be looking at Hendrix Lapierre, a 6’0” center from the QMJHL’s Chicoutimi Saguenéens. Lapierre was the former first-overall pick in the QMJHL draft, and he’s mostly lived up to that status on the ice, with admirable point production and displays of the skill that makes him a likely first round pick. Lapierre’s issues came with repeated concussions, causing him to miss massive amounts of time and leaving lingering questions surrounding his health.

Ranked 15th on Bob McKenzie’s final draft board (a ranking that closely reflects the pulse of scouts and GMs’ thoughts on prospects), Lapierre will most likely fall in the area that I feel the Predators have the best shot at picking in (the 15-20 range), and the uncertainty that his injury history brings could cause some serious variance with where he’s chosen. Why should Nashville buy low on a player with some valid health questions? I’ll do my best to convince you below.

What makes him good?

If Lapierre is the name David Poile calls on draft day, Nashville fans can look forward to these three big positives:

1.) He’s among the best pure playmakers in this draft

Something anyone would notice when watching Lapierre play is how incredibly dangerous he is as a passer. He consistently executes on setting up high-danger scoring chances thanks to his well above average hands, high hockey IQ, and excellent touch. Lapierre is the prototypical offensive zone quarterback, making deft plays from below the goal line to create seams with the threat of his still-dangerous (but not elite) shot.

That clip is a nice little highlight reel pass through a really tight window with pinpoint accuracy. What makes Lapierre so special is how regularly this happens with him on the ice.

While he is certainly a pass-first player, as you could tell just by looking at his goal totals, Lapierre isn’t hindered by being a one-dimensional player. His passing is dynamic enough that he visibly improves everyone around him by acting as a pure distributor without detracting because he’s too willing to pass on taking a shot. He’s got the potential to be a true assist machine at the NHL level.

2.) His ability to control the pace of the game is elite

In order for a pure pass-first center to really be an exceptional point producer and play-driver, they need to be able to slow the game down and speed it up at will. Lapierre certainly demonstrated that in the five games I watched him play, regularly going from zero to sixty and catching the opposition off guard with a flurry of moves executed at his top gear. Speaking of which, Lapierre’s functional top speed is among the best in this class, adding to the value of this ability.

When I evaluate a center prospect’s passing ability, many of the standout plays are based upon the pass following a zone exit/entry. In Lapierre’s case, I counted innumerable times where he would lead the rush, suddenly stop and create a crease, and execute a pass to the trailer on the money. His repeated success on the low-difficulty plays was promising, but when he had to use his shiftiness and feel for the game to create dangerous chances, he was at his best and most exciting as a prospect.

He really stands out among all of the players I’ve watched this year in this regard; I don’t know that there’s another player outside of the top ten that has a better feel for the game’s ebb and flow.

3.) His skillset is already very well-rounded

Lapierre is interesting because in almost every regard, he’s a pretty complete prospect. He clearly needs to add some muscle before being NHL-ready and would likely benefit from time in the minor leagues with an AHL training staff, but aside from that he’s already average, well above average, or elite in all other aspects of play. His defense won’t wow you, but it’s good enough; his play in transition is a bit inconsistent at times, but at worst it’s slightly above average and at best it’s elite. His shot is just adequate, but he frequently compensates for it with his hands.

If Lapierre can manage to stay healthy, there’s very little reason to think he won’t become at worst a second-line center in the NHL pretty soon. Teams won’t have to worry about bust potential because of a glaring issue in his game, unlike some of the prospects I’ve previously looked at (see: Jacob Perreault’s effort). The injuries are concerning, but you could arguably chalk many of them up to bad luck, as I didn’t see Lapierre putting himself in compromising positions. He’s already on the verge of being NHL-ready if he can play a full season next year, much like Philip Tomasino was coming out of last year’s class.

Why is he a good fit in Nashville?

Lapierre is an interesting choice for a first rounder to me for a few reasons:

1.) If he stays healthy, he has incredible potential

As much as I love Egor Afanasyev, Philip Tomasino, and Eeli Tolvanen, none of them have the sensational passing ability that Lapierre possesses. His blend of cerebral play and hard, accurate, and creative passing make him an offensive talent that would be unique in the current pipeline, compared to the more balanced Tomasino or shoot-first Afanasyev and Tolvanen. Those two aforementioned shooters are going to need someone to dish them the puck, and Lapierre’s timeline (if he’s healthy) puts him on track to make the NHL around the same time as the former.

If Lapierre is Poile’s choice, the team is likely picking in the late first round. You aren’t going to find a prospect with better upside here, in all likelihood, besides maybe Jacob Perreault (who is, admittedly, my favorite prospect this year). Lapierre was barely outscored by Cole Perfetti in the Hlinka Cup when the two were both healthy; Perfetti is easily a top-ten talent this year and is probably on the cusp of being in my top five for his sheer upside. As I’ve repeated over and over again, the Predators need to move out of their risk-averse approach to drafting and developing and take chances on guys who can be the cost-effective, incendiary talents the franchise needs to propel the current roster back to true contention.

2.) He fills a hole on the future power-play unit

The Predators already have a future power-play weapon in Eeli Tolvanen developing in Milwaukee, but they don’t have a guy who projects to be an elite passer with the skater advantage who will be setting the Finnish sniper up for the shot. Lapierre’s uncanny passing sense and accuracy make him a perfect fit for the power play. He’d likely fit best in a role distributing from the boards or down low, a slot that Nashville is ill-equipped to fill if Ryan Johansen continues his concerning trend of decline.

Nashville should constantly be looking for personnel to improve their special teams, and Lapierre is about as nice of a piece to add as you could hope for. This team ranks 25th in the league in power-play success rate since the 2009-10 season. For as much talent as the Predators have had in those years, the power play has remained miserable to watch. It’d be nice to add an instantly positive impact player to that unit to at least prevent it from actively hurting the team.

3.) He fills an organizational need

The Predators are shallow everywhere in the pipeline, but they’re hurting the most down the middle. Considering David Poile’s ravenous hunger for a true 1C in years past, that’s a bit surprising, but the only pivot that I feel assured of as a top-six forward is Tomasino. Rem Pitlick had a good first AHL season, but besides him, the team has little to look forward to at center. Adding a top-flight talent in that need would be ideal, to say the least.

Who does he compare to?

I don’t love doing direct comparables, because they tend to hype players up too much, so I tend to give my floor of what the player could be if they become an NHLer, a middling projection, and my ceiling under the same circumstances.

The big question surrounding Lapierre is whether or not injuries will prevent him from reaching the NHL, but if he makes it to the league and is able to stick I feel that his floor will be around what Kyle Turris offered this past season; he can function as a well above average 4th/3rd line center with ample playmaking ability, at the very worst. If Nashville fails to improve at 5v4, he could still find his way into minutes with the second power-play unit.

If Lapierre never quite translates his excellent passing into star point production, he’ll still be around the level of Kerfoot, albeit with less goal-scoring ability. Kerfoot was a dangerous, pass-first player this year and has mostly fit that archetype for his whole career; Lapierre fits the same mold and with middling returns on his potential could end up a 40-point, ten-goal player on a regular basis.

Ceiling: Jakub Voráček (but a center)

Lapierre has shown the same patience and slick passing that’s made Jakub Voráček one of the best wingers in the NHL in years past. The two share similarly meh shooting ability but compensate for it with their skilled hands and ability to work themselves open with quick processing of the game at a high level. Voráček has never been the focal point of a power play thanks to spending his whole prime with Claude Giroux, but he (and, by extension, Lapierre) naturally fits the distributor role from along the boards.

It’s always nice to have a guy that can make that move cutting in and have an innate sense for where his support will be attacking. Lapierre is that kind of player.

I feel that Lapierre caps out somewhere near 75 points and 15ish goals, i.e. a first-line caliber forward by production, which I think accurately reflects what he could become if healthy.

Lapierre is such a divisive prospect this year because of how people feel about his injuries, but his status as a boom-or-bust pick could be beneficial to a team that gets him back to full strength. As such, he’s potentially the biggest steal in this year’s first round pool, depending upon where he falls. I’d love for Nashville to jump on a game changer like him late in the first, if possible.