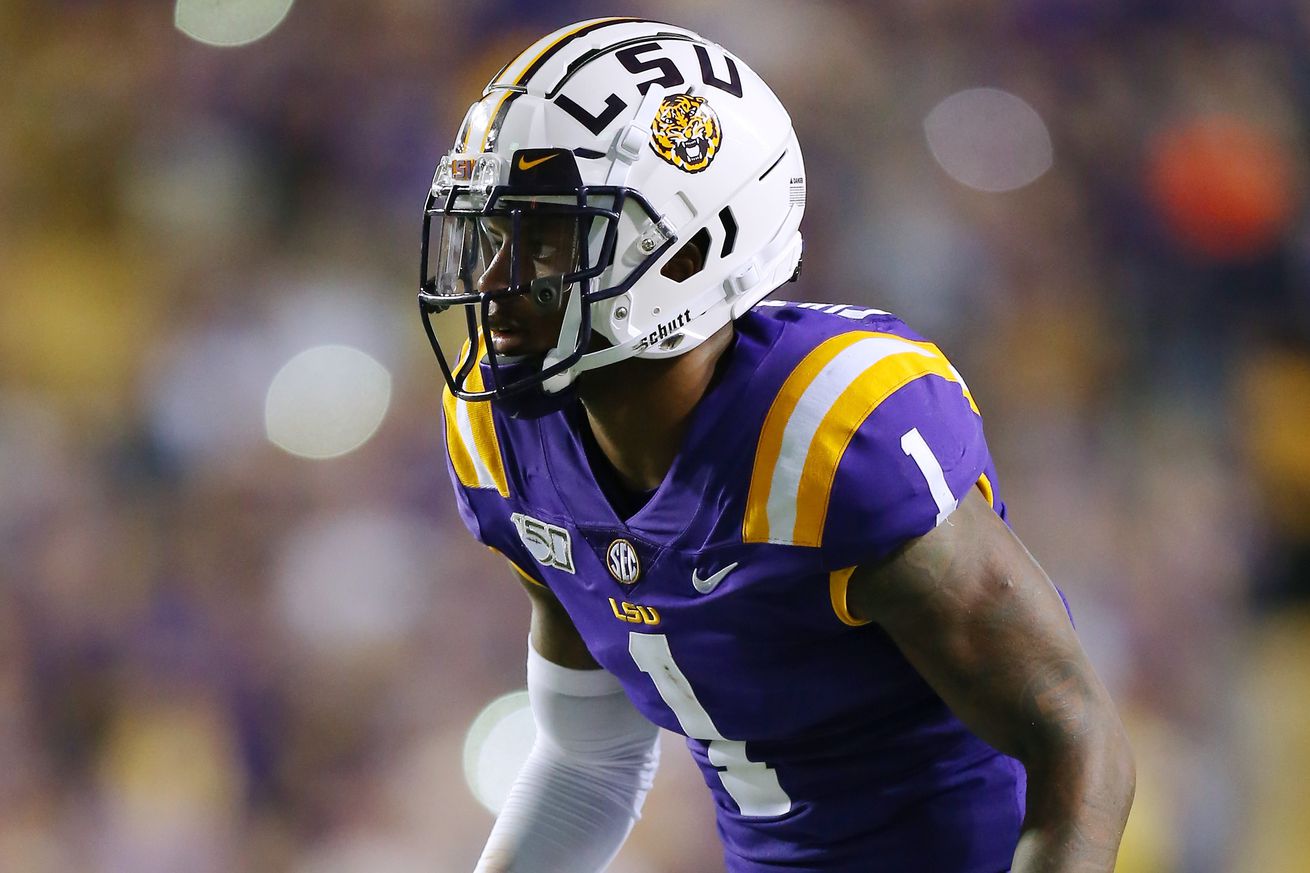 Kristian Fulton falls in the Titans lap at 61 before Jon Robinson nabs Derrick Henry’s new running mate on Day 2. What should we expect from the final rounds?

Yesterday, I wrote this regarding the reason the Titans likely went ahead with Isaiah Wilson at pick 29:

Never in my wildest dreams did I think that Kristian Fulton — the guy I had as CB3 overall — would be there at pick 61 at the end of the 2nd round. My guess was that the Titans would have options like Amik Robertson or Cameron Dantzler at that spot. Good players, but certainly not as complete as Fulton is as a cornerback prospect.

So let’s get into what the Titans are getting in both Fulton and 3rd round running back Darrynton Evans along with who could be available for Jon Robinson on Day 3.

Kristian Fulton should be an instant starter in the Titans secondary

The second round of the draft was quite the rollercoaster of emotions for Titans fans. There was almost no doubt that Tennessee would be going corner at pick 61, and I just hoped one of the top four or five guys that I had remaining at that position would last all the way until the end of the round. I didn’t even allow myself to seriously entertain the idea of Fulton at 61.

Then the round started and everything but corner started flying off the board. By pick 50, the Bears finally selected Jaylon Johnson, then Trevon Diggs went to Dallas with the next pick and it felt like the corner run was finally coming… but it never did. When the Titans finally went on the clock at 61, Kristian Fulton was still sitting on the board somehow, giving Jon Robinson one of the best value picks of the day at the Titans biggest position of need.

In Fulton, the Titans are getting one of the best press man corners in the draft class, a skill that is crucial to disrupting the quick hitting passing attacks of the modern NFL. That ability was never made more clear than when he went against top competition too. Check out these numbers against Henry Ruggs, Jerry Jeudy, and Tee Higgins — three receivers that got drafted in the first 33 picks — from last year.

You simply don’t see corners pressing Henry Ruggs at the line of scrimmage. Fulton did and he did it extremely well, showing a fearlessness and ability that will serve him well at the next level.

His closing speed is among his best attributes. At the combine he ran a 4.46, but his speed shows up on tape when he’s asked to run vertical with opposing receivers.

Fulton didn’t have an elite combine, but he does have elite tape and elite metrics. He was the SEC’s top graded corner for each of the last two years according to PFF — over guys like C.J. Henderson and Noah Igbinoghene who both went in the 1st round — and he was the only corner in the draft class who posted as many forced incompletions as he allowed first downs on throws into his coverage.

Kristian Fulton: The only draft-eligible CB who didn’t allow more first downs (20) than he had forced incompletions (20) pic.twitter.com/OsF9vkoRAD

Fulton can play inside or outside and both he and Jon Robinson talked about that after the pick last night. The Titans obviously haven’t made any decisions about who is playing where at this point, but Fulton is going to be on the field with Malcolm Butler and Adoree’ Jackson right away, that much I’m sure of.

I had Isaiah Wilson and Kristian Fulton as the two guys that I thought the Titans would most likely take at 29 heading into the draft and Jon Robinson manages to get them both without trading up. Wow.

After adding a high end corner, the Titans board opened up quite a bit and I felt like there were several different ways they could go here. The Ravens snagged Devin Duvernay — the speedy wide receiver out of Texas that I’d given the Titans at 93 in my initial mock draft — at pick 92 which left few WR options of real value on the board.

So instead, the Titans went running back and landed a guy that’s a near perfect fit for what they said they were looking for in a complement to Derrick Henry. Darrynton Evans is a lightning quick back, turning in the combine’s second fastest 40 time for a running back this year at 4.41 and generally testing very well for his position.

Evans has good enough size at 5’-10” and 203 pounds, but the Titans weren’t drafting him to be a sledgehammer, they’ve already got the best sledgehammer in the league. They were looking for a backup who could handle third down work, and according to Jon Robinson a week ago, add some value on special teams. Evans ticks all those boxes.

At Appalachian State — one of the best “small school” football programs in the country — he was a hyper productive three down back, rushing for 1,480 yards and 18 touchdowns last year in an outside zone scheme. He also chipped in another 198 yards on 18 catches with 5 touchdowns through the air and returned kicks for the Mountaineers.

#Titans adding the lightning to Henry’s thunder with Darrynton Evans out of Appalachian State. Second fastest back in the draft with a 4.41 forty. Played in an outside zone heavy scheme for a great small program in App State. Good pass catcher. Great fit.pic.twitter.com/Ev0KlymkAN

The Titans met with Evans during the pre-draft process and with a run on running backs happening around them, they decided to go ahead and get their guy here. Evans should fit in nicely as a runner. His one-cut slashing style is perfect for the outside zone scheme the Titans love to run and his speed will give the team another home run hitter on offense.

The one question mark I have with him is if he can pass protect and catch the ball out of the backfield at an elite level. It’s not that he wasn’t good at those things at the college level, it’s just that Appalachian State rarely asked him to do them. Jon Robinson said that he felt comfortable that Evans would be able to come in and contribute on third downs right away and I’d expect that to be the plan.

I’d also peg Evans as the favorite to win the kick return duties for the Titans. He performed that role each of the last three years for App State, even as their starting running back, and the reason is that he’s simply good at it. Evans had one kick return touchdown in every season he played in college.

How did Day 2 impact #ClowneyWatch?

All signs continue to point towards the Titans and Jadeveon Clowney being on a collision course. For a second straight day Tennessee chose to pass on pass rush help. With their next pick on the board being pick 174 overall in the 5th round, the odds of the Titans grabbing a player who reduces their interest in Clowney is now zero.

Meanwhile, the Seahawks grabbed Tennessee edge rusher Darrell Taylor with the 48th overall pick as they continue to signal that they’ve moved on from their lingering free agent star.

It certainly looks like Clowney to Tennessee is likely at this point.

What do the Titans do on Day 3?

The options are wide open now. Tennessee has pick 174 in the 5th round and then have to wait until the 7th round with picks 224, 237, and 243 to finish out their selections.

Those are going to be some long waits, but I’m not sure there is much that Jon Robinson can do about it. Packaging even a couple of the 7ths with the 5th won’t get them all the way up into the 4th round. If they want to pick before 174 they’ll need to use some 2021 picks to do it. And maybe that’s possible considering they’re likely going to get a 3rd round compensatory pick next year for Jack Conklin departing in free agency. However, I think it’s more likely that they stick and pick.

There are still a bunch of good players left on the board, including one of my personal favorites in Amik Robertson, but the odds of him falling that low are very small. The Titans have a bunch of spots that could be addressed so I’ll just hit them quickly with some players to watch.

A backup quarterback could be in play on Day 3. Logan Woodside might be ready for the QB2 role, but there is no chance they just gift it to him without bringing in competition. Jake Fromm and Jacob Eason remain on the board and then you have the next tier in Anthony Gordon, James Morgan, Cole McDonald, and Steven Montez. The Titans met with each of the four guys in that next tier so keep an eye on QBs as the day progresses. I like Gordon the best out of the “second tier” options here.

Wide receiver depth is also needed. I like Kalif Raymond and Cam Batson, but again, they’re pretty unproven. The draft has seen 17 receivers go off the board already so the options are dwindling, but there are still some good players out there. Guys like Antonio Gandy-Gaulden, Collin Johnson, Tyler Johnson, Donovan Peoples-Jones, Jauan Jennings, K.J. Hill, Lawrence Cager, Quez Watkins, John Hightower, Darnell Mooney, and Quartney Davis all have traits that could project to success in the NFL.

They could double dip at corner. Amik Robertson and Bryce Hall probably won’t be there, but slides from Reggie Robinson, Troy Pride, Darnay Holmes, Kindle Vildor, or A.J. Green aren’t out of the question. There is still a lot of talent at this spot right now.

If the Titans want to add some beef on the defensive line Leki Fotu, Larrell Murchison, and Rashard Lawrence make some sense. James Lynch sliding all the way to 174 is unlikely, but if he did somehow end up there I wouldn’t be opposed to Karl Klug 2.0 at that spot.

Edge rusher still has some value left too. Curtis Weaver and Bradlee Anae are shining examples of the NFL preferring traits to production at this position. Derrek Tuszka is one of my draft crushes with his combination of elite production and measurables from North Dakota State.

How about an inside linebacker to slot in behind David Long? Akeem Davis-Gaither — Darrynton Evans’ college teammate — stands out as a value right now. Troy Dye, Shaun Bradley, Justin Strnad, and Shaquille Quarterman are some other very intriguing names. The Titans met with Bradley.

Finally… kickers! The Titans will likely bring in a young kicker to compete with Greg Joseph in camp for the job. Tennessee will be an attractive destination for UDFA kickers after the draft based on their unsettled situation, but if they really like one of these guys, taking them in the 7th and removing any doubt makes sense. Rodrigo Blankenship, Tyler Bass, and Sam Sloman are some names to watch.