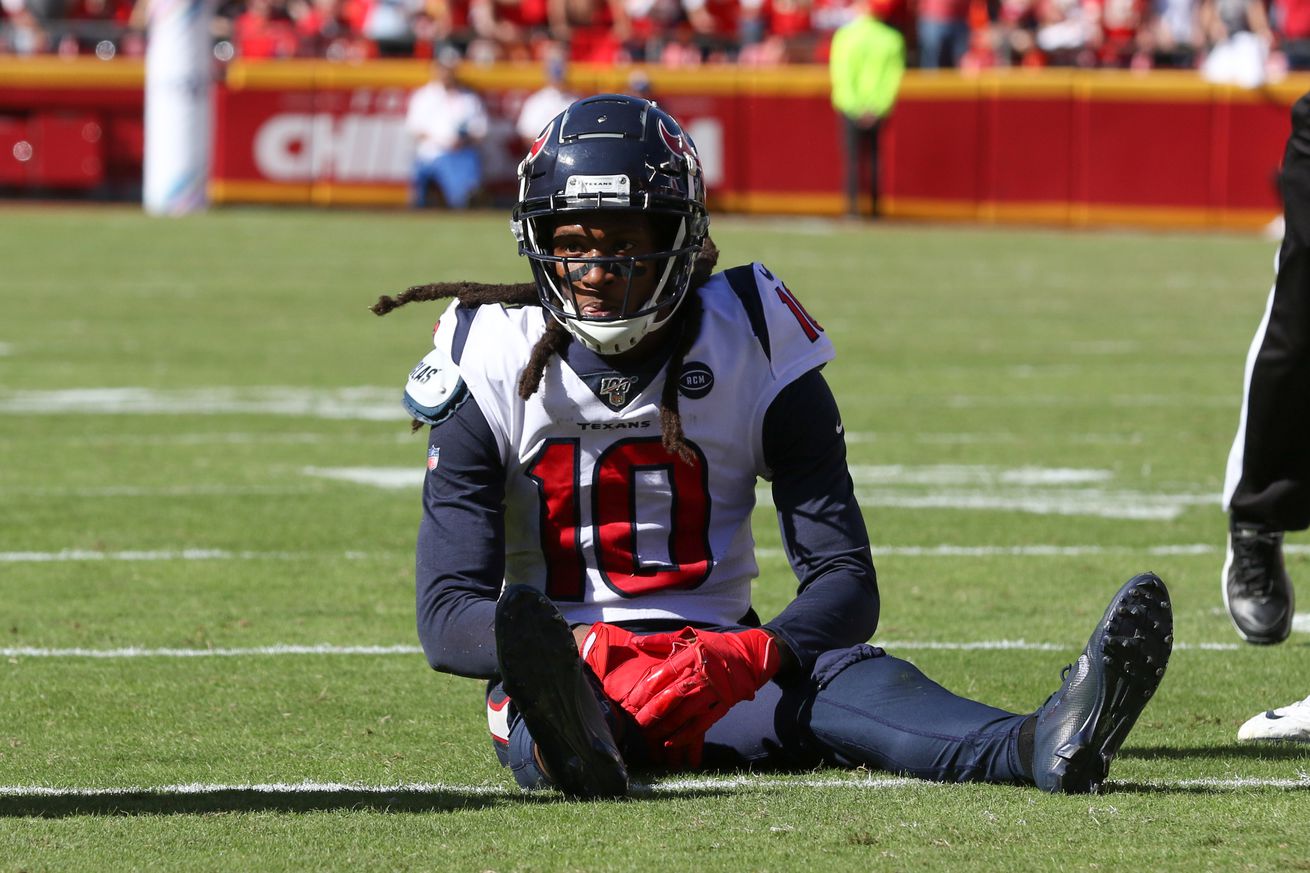 Checking in on the offseason activity around the division as we wait on more free agency news.

Free agency news has slowed to a trickle at this point. That is likely due to the complications in getting physicals done — and doing business in general — with so many travel restrictions brought on by the COVID-19 virus.

The Titans almost certainly aren’t done bringing in players. They still have a glaring hole at corner that needs to be filled and they could also use some depth at several spots across the roster. They also might or might not be waiting on an answer from a certain freakish pass rusher.

The same is true for the Texans, Colts, and Jaguars. All of these teams are a work in progress right now and should not be judged as final products, but I thought it would be interesting to take a quick inventory of what each team has done thus far in free agency as we wait on more news to trickle out.

The Texans have won the AFC South in four of the last five years and have the best quarterback in the division in Deshaun Watson. For that reason, they’re the team to beat heading into 2020… but it sure seems like they’re intent on making it easier for the other teams to catch them.

Trading away DeAndre Hopkins was probably the most shocking move of the offseason, especially when you consider the return. Houston got a running back who hasn’t played well since 2016 — and who is on an atrocious contract — and a 2nd Round Pick back for arguably the best receiver in football on a contract that’s a relative bargain.

Hopkins is just 27 years old, still in the middle of his prime, and he had absolutely destroyed the Titans during his first seven years in the league, racking up 1,313 yards and 7 touchdowns against Tennessee in 13 games. Mike Vrabel should be sending Bill O’Brien an edible arrangement for shipping Nuk out to the NFC and depriving Watson of his biggest weapon.

The Texans will still pose some problems for opposing secondaries when Will Fuller, Kenny Stills, and the newly added Randall Cobb, but Fuller has missed over a third of the team’s regular season contests over the last four years. Cobb is a nice addition after a bounceback year in 2019 with Dallas, but he’s about to turn 30 in August, had a ton of injuries early in his career, and his deal is effectively fully guaranteed for the next two years.

Houston also lost D.J. Reader, a player who had blossomed into one of the league’s best nose tackles over the last couple years. The Texans formerly formidable front has been reduced to a 31-year old J.J. Watt, Whitney Mercilus, and spare parts.

In the interest of fairness, free agency is not over yet and the Texans have lots of cap space left at the moment — though some of that is likely earmarked for massive extensions for Laremy Tunsil and Deshaun Watson — so I’ll withhold final judgement, but it’s hard to see the Houston roster looking better heading into 2020 without Hopkins, especially given that they don’t have a first round pick to work with in the draft.

Obviously a lot more has gone out than come in at this point, but with over $27 million remaining in available cap space, Jon Robinson isn’t done filling out the 2020 version of the roster.

The bright side here is that the Titans will bring back 10 of 11 starters from an offense that shredded opposing defenses down the stretch last year. Ryan Tannehill and Derrick Henry are back in the fold, as is blocking tight end MyCole Pruitt. The only significant change from the group that finished last year is Dennis Kelly stepping in for Jack Conklin at right tackle. If you believe in the benefits of continuity, this group will provide that in spades.

The downside comes on defense, where Jurrell Casey, Cameron Wake, and Logan Ryan are all off the roster, though Ryan is still unsigned and could still return theoretically. Kamalei Correa, who was very good down the stretch for the Titans last year, is also a free agent at the moment. The addition of Beasley certainly doesn’t offset all that talent. If there is another shoe to drop with regards to free agent signings, you’d expect them to come on this side of the ball.

There is no doubt that the Titans roster right at this moment is worse than it was at the end of 2019. If they add Jadeveon Clowney to the mix and sign a few quality depth pieces in the next few weeks, that becomes at least an argument worth having. The Titans will need to hit on an instant impact player or two in the draft most likely to put this team over the top to be clearly better than last year’s version.

However, we always knew that this was going to be an offseason that was more about keeping key players than it was about adding new talent. This is reality for most good teams. Look at the two Super Bowl participants from last month. So far those two teams have combined to lose DeForest Buckner, Emmanuel Sanders, Kendall Fuller, Emmanuel Ogbah, and Stefen Wisniewski without adding anyone of significance.

It’s also worth noting that last year’s version of the Titans was pretty darn good, going 9-4 with Tannehill in the lineup despite facing a grueling schedule that featured 7 of 13 games coming against 2019 division winners. If the 2020 Titans end up roughly equivalent to what they were late last season, that’ll be a true contender.

Probably the only team in the division that has definitively improved so far this offseason, the Colts made a big splash move in trading their first round pick for 49ers defensive tackle DeForest Buckner. A former 7th overall pick, Buckner has racked up 19.5 sacks over the past two years and is in the prime of his career at 26 years old. He will join the always excellent Justin Houston and a promising developmental edge rusher in Kemoko Turay on what has suddenly become a very formidable Colts front.

On the other side of the ball, Indy brought back long time left tackle Anthony Castonzo and added Philip Rivers to replace Jacoby Brissett as their starting quarterback. The Colts will carry a $49.325 million cap hit at the quarterback position in 2020, including Brian Hoyer’s $2.95 million dead cap hit after his release.

For all that money, their best option will be Rivers, 38 year old coming off his worst season since 2016. I have no doubt that Rivers will prove to be a better passer than Brissett, but there is certainly reason to question how high his ceiling is in 2020. He never had a huge arm, but the zip that he did have is almost completely shot. Rivers can overcome that to some degree by throwing with accuracy and anticipation, but how much will growing pains with a new set of weapons in a new offense (with a shortened offseason) hamper that anticipation element?

The Colts offensive line is very good and should provide Rivers with better protection than he got in LA, but blocking for Rivers is also quite different than blocking for Andrew Luck or Jacoby Brissett, two mobile quarterbacks who are exceedingly difficult to bring down even when pressure does get home. And who is Rivers throwing to besides T.Y. Hilton? Zach Pascal and Parris Campbell could be OK, but they aren’t at the level that Rivers had grown accustomed to during his last few years with the Chargers.

The 2020 Colts are a more dangerous animal than the 2019 Colts though. They will not have a first round pick to add to this group, but they still have a good amount of cap space left to spend so they may not be done adding talent to this roster.

The Jaguars were bad last year and got considerably worse so far. Bouye and Campbell were traded away and Yannick Ngakoue seems to have no intention of playing on the franchise tag. If he goes, that leaves Jacksonville with Josh Allen and… not much else that scares you on what used to be a dominating defense just two years ago.

What they do have is a boatload of draft picks as they attempt to rebuild… again. Jacksonville has two first round picks in both of the next two drafts as a result of the Jalen Ramsey trade. They also picked up a slew of additional mid-round picks by dealing away Bouye, Campbell, and Foles. They aren’t going to contend in 2020, but if David Caldwell is able nail a few of these picks… lol I can’t even say that with a straight face.

As I’ve mentioned several times, all of these teams are incomplete at the moment. There are moves left on the table for all of these squads and the draft is still a month away. That being said, how do you think the AFC South shakes out in 2020 as things stand today?