After a strong contract year, D.J. Reader appears set to have a strong market. In addition to the Broncos being interested in the four-year Texans defensive lineman, the Bills and Titans are expected to be in on this pursuit as well, Aaron Wilson of the Houston Chronicle notes. 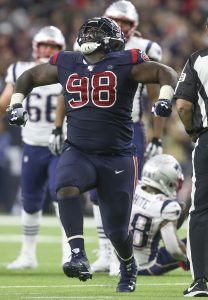 Reader is expected to command a deal that pays at least $11MM annually, per Wilson, who adds that the Texans initially offered the former third-round pick a $6MM-per-year deal. That offer, however, came during the 2019 offseason — before Reader’s quality season thrust him onto the radar for a big second contract.

Reader graded as Pro Football Focus’ No. 7 overall interior defender last season, operating as one of the league’s top run stoppers. He will turn 26 in July. The Texans have made multiple offers to their breakout interior defender, but Wilson adds that Reader is not expected to return to Houston next season. That will create an interesting marketplace for teams in need of inside help.

Buffalo may lose Jordan Phillips in free agency but used a first-round pick on Ed Oliver last year and has promising 2018 third-rounder Harrison Phillips coming back from ACL surgery. While both Oliver and the younger Phillips are on rookie contracts, run-stuffing defensive tackle Star Lotulelei is attached to a $10MM-AAV deal. The Bills, who will also likely be interested in edge rushers given Shaq Lawson‘s free agent status and Trent Murphy‘s underwhelming Buffalo run so far, are set to hold more than $82MM in cap space. That figure sits third in the league.

Tennessee used a first-rounder on Jeffery Simmons last year and has Jurrell Casey signed through 2022 on a $15MM-per-year pact. Reader would certainly make the Titans a well-invested team on the defensive front. They are also rumored to submit a big offer to Jadeveon Clowney. It is, however, difficult to project how the Titans will proceed. They hold just more than $50MM in cap space but have Ryan Tannehill, Derrick Henry and Jack Conklin as UFAs-to-be. The Titans’ Tom Brady interest only further clouds their picture.